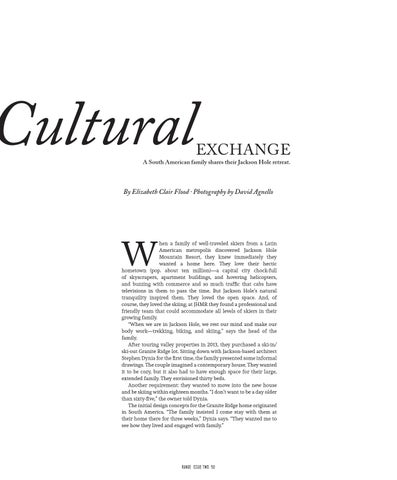 hen a family of well-traveled skiers from a Latin American metropolis discovered Jackson Hole Mountain Resort, they knew immediately they wanted a home here. They love their hectic hometown (pop. about ten million)—a capital city chock-full of skyscrapers, apartment buildings, and hovering helicopters, and buzzing with commerce and so much traffic that cabs have televisions in them to pass the time. But Jackson Hole’s natural tranquility inspired them. They loved the open space. And, of course, they loved the skiing; at JHMR they found a professional and friendly team that could accommodate all levels of skiers in their growing family. “When we are in Jackson Hole, we rest our mind and make our body work—trekking, biking, and skiing,” says the head of the family. After touring valley properties in 2013, they purchased a ski-in/ ski-out Granite Ridge lot. Sitting down with Jackson-based architect Stephen Dynia for the first time, the family presented some informal drawings. The couple imagined a contemporary house. They wanted it to be cozy, but it also had to have enough space for their large, extended family. They envisioned thirty beds. Another requirement: they wanted to move into the new house and be skiing within eighteen months. “I don’t want to be a day older than sixty-five,” the owner told Dynia. The initial design concepts for the Granite Ridge home originated in South America. “The family insisted I come stay with them at their home there for three weeks,” Dynia says. “They wanted me to see how they lived and engaged with family.” 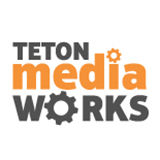