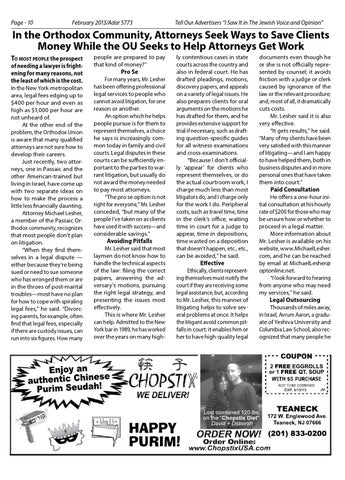 In the Orthodox Community, Attorneys Seek Ways to Save Clients Money While the OU Seeks to Help Attorneys Get Work To most people the prospect

of needing a lawyer is frightening for many reasons, not the least of which is the cost. In the New York-metropolitan area, legal fees edging up to $400 per hour and even as high as $1,000 per hour are not unheard of. At the other end of the problem, the Orthodox Union is aware that many qualified attorneys are not sure how to develop their careers. Just recently, two attorneys, one in Passaic and the other American-trained but living in Israel, have come up with two separate ideas on how to make the process a little less financially daunting. Attorney Michael Lesher, a member of the Passaic Orthodox community, recognizes that most people don’t plan on litigation. “When they find themselves in a legal dispute — either because they’re being sued or need to sue someone who has wronged them or are in the throes of post-marital troubles—most have no plan for how to cope with spiraling legal fees,” he said. “Divorcing parents, for example, often find that legal fees, especially if there are custody issues, can run into six figures. How many

people are prepared to pay that kind of money?” Pro Se For many years, Mr. Lesher has been offering professional legal services to people who cannot avoid litigation, for one reason or another. An option which he helps people pursue is for them to represent themselves, a choice he says is increasingly common today in family and civil courts. Legal disputes in these courts can be sufficiently important to the parties to warrant litigation, but usually do not award the money needed to pay most attorneys. “The pro se option is not right for everyone,” Mr. Lesher conceded, “but many of the people I’ve taken on as clients have used it with success—and considerable savings.” Avoiding Pitfalls Mr. Lesher said that most laymen do not know how to handle the technical aspects of the law: filing the correct papers, answering the adversary’s motions, pursuing the right legal strategy, and presenting the issues most effectively. This is where Mr. Lesher can help. Admitted to the New York bar in 1989, he has worked over the years on many high-

ly contentious cases in state courts across the country and also in federal court. He has drafted pleadings, motions, discovery papers, and appeals on a variety of legal issues. He also prepares clients for oral arguments on the motions he has drafted for them, and he provides extensive support for trial if necessary, such as drafting question-specific guides for all witness examinations and cross-examinations. “Because I don’t officially ‘appear’ for clients who represent themselves, or do the actual courtroom work, I charge much less than most litigators do, and I charge only for the work I do. Peripheral costs, such as travel time, time in the clerk’s office, waiting time in court for a judge to appear, time in depositions, time wasted on a deposition that doesn’t happen, etc., etc., can be avoided,” he said. Effective Ethically, clients representing themselves must notify the court if they are receiving some legal assistance, but, according to Mr. Lesher, this manner of litigating helps to solve several problems at once. It helps the litigant avoid common pitfalls in court; it enables him or her to have high-quality legal

documents even though he or she is not officially represented by counsel; it avoids friction with a judge or clerk caused by ignorance of the law or the relevant procedure; and, most of all, it dramatically cuts costs. Mr. Lesher said it is also very effective. “It gets results,” he said. “Many of my clients have been very satisfied with this manner of litigating—and I am happy to have helped them, both in business disputes and in more personal ones that have taken them into court.” Paid Consultation He offers a one-hour initial consultation at his hourly rate of $200 for those who may be unsure how or whether to proceed in a legal matter. More information about Mr. Lesher is available on his website, www.MichaelLesher. com, and he can be reached by email at MichaelLesher@ optonline.net. “I look forward to hearing from anyone who may need my services,” he said. Legal Outsourcing Thousands of miles away, in Israel, Avrum Aaron, a graduate of Yeshiva University and Columbia Law School, also recognized that many people he

The Jewish Voice and Opinion speaks out forcefully and unashamedly for the unique concerns of what we have termed “classical Judaism.” As a politically conservative Jewish publication, we take as our mission to present news and feature articles not generally available elsewhere in the Jewish or secular media. This issue covers the results of the Israeli Election, the bombing in Syria, Gilad Shalit, and more...