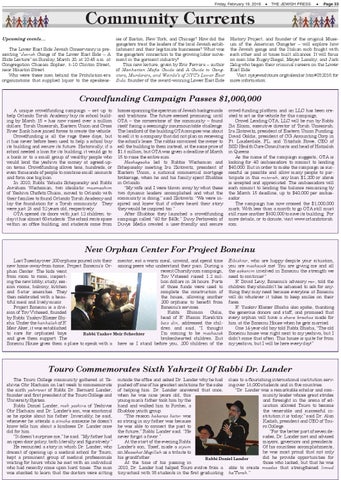 Community Currents Preschoolers Upcoming events… in the Rambam Day School of The Lower East Side Jewish Conservancy is preSavannah, Georsenting “Jewish gia learn about Gangs of the Lower East Side – A SlideAleph Lecture” on Sunday, March 20, at 10:45 a.m. at the Bais Congregation Chasam Sopher, 8-10 Clinton Street, and their names.

near Houston Street. Who were these men behind the Prohibition-era organizations that supplied liquor to the speakeas-

ies of Boston, New York, and Chicago? How did the gangsters treat the leaders of the local Jewish establishment and their legitimate businesses? What was the gangsters’ connection to the growing labor movement in the garment industry? This new lecture, given by Eric Ferrara – author of Manhattan Mafia Guide and A Guide to Gangsters, Murderers, and Weirdo’s of NYC’s Lower East Side; founder of the award-winning Lower East Side

On Sunday, October 13, the Yeshiva of Central

History anditsfounder of the Sunday original LearnMuseQueensProject; kicked off Parent-Child um of the American Gangster – will explore how ing Program. the Jewish gangs and the Italian mob fought with each other and at times built alliances. It will focus on men like Bugsy Siegal, Meyer Lansky, and Jack Zelig who began their criminal careers on the Lower East Side. Visit nycjewishtours.org/calendar.htm#032016 for more information.

Crowdfunding Campaign Passes $1,000,000 A unique crowdfunding campaign – set up to homes spanning the spectrum of Jewish backgrounds help Orlando Torah Academy buy its school build- and traditions. The future seemed promising, until Earlier this month, the Rachel’s Children Foundation held its annual of Ra– the cornerstone of thecommemoration community – found ing by March 15 – has now raised over aReclamation million OTA chel Imeinu’s yarzheit. A buffet dinner was held at the Manhattan Beach Jewish Center on October 14. The dollars. Torah Umesorah, Eastern Union and Cross itself facing a seemingly insurmountable challenge. keynote wasjoined Rabbiforces Jonathan Riettithe who gave a dramatic presentation on the relationship RaThe landlord of the building OTA occupiesbetween was about River speaker Bank have to create vehicle. chel Imeinu and the  nal Geulah. Crowdfunding is all the rage these days, but to sell it to a company that did not plan on renewing it has never before been used to help a school buy the school’s lease. The rabbis convinced the owner to its building and secure its future. Historically, if a sell the building to them instead, at the same price of school needed a loan for its building, it would go to $1.8 million, but OTA was given a deadline of March a bank or to a small group of wealthy people who 15 to raise the entire sum. Hashagacha led to Rabbis Wachsman and would lend the yeshiva the money at agreed-upon terms. Crowdfunding allows tens, hundreds, or Schepansky meeting Ira Zlotowitz, president of even thousands of people to combine small amounts Eastern Union, a national commercial mortgage brokerage, when he and his family spent Shabbos and form one big loan. In 2010, Rabbi Yehuda Schepansky and Rabbi in Orlando. “My wife and I were blown away by what these Avraham Wachsman, two idealistic musmachim of Yeshiva Chofetz Chaim, moved to Orlando with two dynamic leaders accomplished and what the their families to found Orlando Torah Academy and community is doing,” said Zlotowitz. “We were inlay theSpeaker foundation forJonathan a Torah Rietti community. They spired and knew that if others heard their story Keynote Rabbi Rabbi Yechezkel Pikus, Chaim Deutsch, and Evelyn and Evelyn and president they would be inspired too.” were just Haies, 28 andfounder 32 years old, respectively. Haies. of RCRF. After Shabbos they launched a crowdfunding OTA opened its doors with just 12 children; today it has almost 60 students. The school rents space campaign called “40 for $40k.” Duvy Perkowski of within an office building, and students come from Duvys Media created a user-friendly and secure

crowd-funding platform and an LLC has been created to act as the vehicle for this campaign. Crowd Lending OTA, LLC will be run by Rabbi Zvi Bloom, executive director of Torah Umesorah; Ira Zlotowitz, president of Eastern Union Funding; David Goldis, president of CG Accounting Corp in Ft. Lauderdale, FL; and Yitzchok Rowe, CEO of BSD Health Care Consultants and head of Hatzalah in Queens. As the name of the campaign suggests, OTA is looking for 40 ambassadors to commit to lending $40,000. But in order to make the campaign as successful as possible and allow many people to participate in this mitzvah, any loan $1,200 or above is accepted and appreciated. The ambassadors will each commit to lending the balance remaining by the March 15 deadline, up to $40,000 per ambassador. The campaign has now crossed the $1,000,000 mark. With less than a month to go OTA still must still raise another $800,000 to save its building. For more details, or to donate, visit www.orlandotorah. com.

Eibishter, who are happy despite your situation, you are mechazek me! You are giving me and all the askanim involved in Boneinu the strength we need to continue!” R’ Dovid Levy, Boneinu’s advisory rav, told the children they shouldn’t be ashamed to ask for anything they may need because everyone at Boneinu will do whatever it takes to keep smiles on their faces. R’ Yaakov Eliezer Shisha also spoke, thanking the generous donors and staff, and promised that every orphan will have a sheva brachos made for him at the Boneinu House when he gets married. One 14-year-old boy told Rabbi Shisha, “The old Boneinu house was right next to my yeshiva, but I didn’t come that often. This house is quite far from my yeshiva, but I will be here every day!”

On October 2, Zicharon, an organization that assists people on issues relating to dementia, hosted an informative evening in Menorah Hall featuring renowned dementia experts who provided the audience with much-needed advice and information on dealing with this disease. speakers were Rabbi EliezeratKaminetzky; Dr.the Gary Kennedy, chief Geoffice and asked Dr.ofLander why he had TheAmong Tourothe College community gathered Ye- outside riatric Psychiatry at Monte ore Medical Center; and Matt Kudish, senior president of pushed off one of hisvice greatest ambitions for the sake shivas Ohr Hachaim on last week to commemorate caregiver services of the Chapter of the American of helping Association. him. Dr. Lander answered that once, the sixth yahrtzeit of NY Rabbi Dr. Bernard Lander, Alzheimer’s

class to a flourishing international institution serving over 18,000 students and in five countries. “Dr. Lander was a remarkable scholar and community leader whose great strides founder and first president of the Touro College and when he was nine years old, this and foresight in the arena of edyoung man’s father took him by the University System. ucation allowed Touro to become Rabbi Doniel Lander, rosh yeshiva of Yeshivas hand and walked him to Pirchei, a the venerable and successful inOhr Hachaim and Dr. Lander’s son, was emotional Shabbos youth group. stitution it is today,” said Dr. Alan “The reason hakaras hatov was as he spoke about his father. Invariably, he said, Kadish, president and CEO of Touwhenever he attends a simcha someone he doesn’t so strong in my father was because ro College. know tells him about a kindness Dr. Lander once he was able to connect the past to “For the better part of seven dethe future,” Rabbi Lander said. “He did for him. cades, Dr. Lander met and advised “It doesn’t surprise me,” he said. “My father had never forgot a favor.” mayors, governors and presidents. At the start of the evening Rabbi an open-door policy, both literally and figuratively.” Of his countless accomplishments, He recounted a story in which Dr. Lander, who Lander’s son, Yosef, made a siyum he was most proud that not only dreamt of opening up a medical school for Touro, on Masechet Megillah as a tribute to did he provide opportunities for kept a prominent group of medical professionals his grandfather. Rabbi Doniel Lander those who lacked, but that he was At the time of his passing in waiting for hours while he met with an individual who had recently come upon hard times. The man 2010, Dr. Lander had helped Touro evolve from a able to create mosdos that strengthened limud tiny school with 35 students in the first graduating ha’Torah.” was shocked to learn that the doctors were sitting Matt Kudish

To submit pictures to the Community