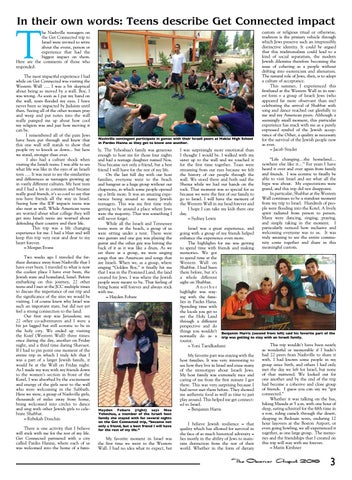 In their own words: Teens describe Get Connected impact

he Nashville teenagers on the Get Connected trip to Israel were invited to write about the event, person or experience that had the biggest impact on them. Here are the comments of those who responded: The most impactful experience I had while on Get Connected was visiting the Western Wall …. I was a bit skeptical about being so moved by a wall. Boy, I was wrong. As soon as I put my hand on the wall, tears flooded my eyes. I have never been so impacted by Judaism until then. Seeing all of the other women pray and weep and put notes into the wall really pumped me up about how cool my religion was and just how moving it can be. I remembered all of the pain Jews have been put through and knew that this one wall still stands to show that people try to knock us down... but here we stand, stronger than ever. I also had a culture shock when visiting the Israeli teens. I was able to see what life was like in the eyes of an Israeli teen …. It was neat to see the similarities and differences as teenagers growing up in vastly different cultures. My host teen and I had a lot in common and became really good friends, it’s so cool to say that you have friends all the way in Israel. Seeing how the IDF impacts teens was also neat as well. While American teens are worried about what college they will get into Israeli teens are worried about defending their country and their life.   This trip was a life changing experience for me. I had a blast and will keep this trip very near and dear to my heart forever. – Morgan Evans Two weeks ago I traveled the farthest distance away from Nashville that I have ever been. I traveled to what is now the coolest place I have ever been, the Jewish state and homeland, Israel. Before embarking on this journey, 22 other teens and I met at the JCC multiple times to discuss the importance of our trip and the significance of the sites we would be visiting. I of course knew why Israel was such an important state, but did not yet feel a strong connection to the land. Our first stop was Jerusalem; my 22 other co-adventurers and I were a bit jet lagged but still ecstatic to be in the holy city. We ended up visiting the Kotel (Western Wall) three times: once during the day, another on Friday night, and a third time during Shavuot. If I had to pin point one moment of the entire trip in which I truly felt that I was a part of a larger Jewish family, it would be at the Wall on Friday night. As I made my way with my friends down to the women’s section in front of the Kotel, I was absorbed by the excitement and energy of the girls next to the wall who were welcoming in the Sabbath. Here we were, a group of Nashville girls, thousands of miles away from home, being welcomed into circles to dance and sing with other Jewish girls to celebrate Shabbat. – Rebekah Doochin There is one activity that I believe will stick with me for the rest of my life. Get Connected partnered with a city called Pardes Hanna, where each of us was welcomed into the home of a fami-

Nashville contingent participate in games with their Israeli peers at Haklai High School in Pardes Hanna as they get to know one another.

ly. The Yehoshua’s family was generous enough to host me for those four nights and had a teenage daughter named Noa. Noa became not only a friend, but a best friend I will have for the rest of my life. On the last full day with our host families, everyone went to the beach and hangout as a huge group without our chaperons, in which some people opened up a little more. It was an amazing experience being around so many Jewish teenagers. This was my first time truly getting to be around a place where Jews were the majority. That was something I will never forget. While all the Israeli and Tennessee teens were at the beach, a group of us were sitting under a tent. There were two guitars and one guy was playing the guitar and the other guy was hitting the back of it as it was like a drum. As we sat there as a group, we were singing songs that are American and songs that are Israeli. When we, as a group, where singing “Golden Boy,” it finally hit me that I was in the Promised Land, the land created for Jews. I was where the Jewish people were meant to be. That feeling of being home will forever and always stick with me. – Hayden Fobare

Hayden Fobare (right) says Noa Yehoshua, a member of the Israeli host family she stayed with for several nights on the Get Connected trip, “became not only a friend, but a best friend I will have for the rest of my life.”

My favorite moment in Israel was the first time we went to the Western Wall. I had no idea what to expect, but

I was surprisingly more emotional than I thought I would be. I walked with my sister up to the wall and we touched it for the first time together. Tears were streaming from our eyes because we felt the history of our people through the wall. We stood there and both said the Shema while we had our hands on the rock. That moment was so special for us because we were the first of our family to go to Israel. I will have the memory of the Western Wall in my head forever and I hope I can take my kids there one day. – Sydney Lewis

custom or religious ritual or otherwise, tradition is the primary vehicle through which Jews preserve such an irrepressibly distinctive identity. It could be argued that this traditionalism could lead to a kind of social separatism, the modern Jewish dilemma therefore becoming the issue of cohering as a people without drifting into esotericism and alienation. The natural role of Jews, then, is to adopt a culture of acceptance. This summer, I experienced this firsthand at the Western Wall in its rawest form – a group of Israeli Jews (who appeared far more observant than me) celebrating the arrival of Shabbat with song and dance reached out gleefully to me and my American peers. Although a seemingly small moment, this particular experience has stuck with me as a purely expressed symbol of the Jewish acceptance of the Other, a quality as necessary for the survival of the Jewish people now as ever. – Jacob Snyder “Life changing…the homeland… nowhere else like it…” For years I have heard it over and over again from family and friends. I was ecstatic to finally be able to visit Israel and see what all the hype was about.  My expectations were grand, and this trip did not disappoint. In particular, Shabbat at the Western Wall continues to be a standout moment from my trip to Israel.  Hundreds of people were flooding into the Kotel. A lively spirit radiated from person to person. Many were dancing, singing, praying, and simply taking in the moment.  I particularly noticed how inclusive and welcoming everyone was to us.  It was truly amazing to see the entire community come together and share in this meaningful custom.

Israel was a great experience, and going with a group of my friends helped enhance the experience even more. The highlights for me was getting to spend time with friends and making memories. We got to spend time at the Western Wall on Shabbat. I had been there before, but it’s a whole different sight on Shabbat. Another highlight was staying with the families in Pardes Hana. Spending time with the locals you get to see the Holy Land through a different perspective and do things you wouldn’t Benjamin Harris (second from left) said his favorite part of the normally do as a trip was getting to stay with an Israeli family. tourist. This trip wouldn’t have been nearly – Yoni Taeidkashani as wonderful or memorable if I hadn’t had 22 peers from Nashville to share it My favorite part was staying with the with. I had known some people in my host families. It was very interesting to group since birth, and others I had only see how they live in Israel and erase many met the day we left for Israel, but none of the stereotypes about Israeli Jews. of that mattered. We looked out for My host family was extremely nice and one another and by the end of the trip caring of me from the first minute I got had become a cohesive and close group there. This was very surprising because I of friends. I guess you can say we “got had never met them before. They showed connected.”   me authentic food as well as time to just Whether it was talking on the bus, play around. This helped me get connecthiking Masada at 5 a.m. with one hour of ed to Israel. sleep, eating schnitzel for the fifth time in – Benjamin Harris a row, riding camels through the desert, sleeping in Bedouin tents, enduring 12 hour layovers at the Boston Airport, or I believe Jewish resilience – that even going bowling, we all experienced it quality which has allowed for survival in together, as one large group.  The memothe face of so much historical adversity – ries and the friendships that I created on lies mostly in the ability of Jews to mainthis trip will stay with me forever. tain distinction from the rest of their – Marin Kirshner world. Whether in the form of dietary 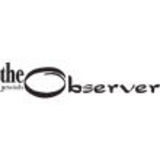