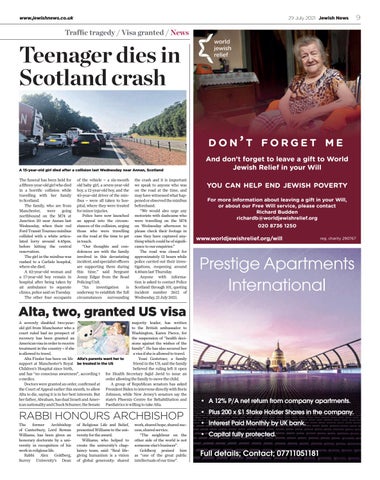 Teenager dies in Scotland crash don’t forget me A 15-year-old girl died after a collision last Wednesday near Annan, Scotland

The funeral has been held for a fifteen-year-old girl who died in a horrific collision while travelling with her family to Scotland. The family, who are from Manchester, were going northbound on the M74 at Junction 20 near Annan last Wednesday, when their red Ford Transit Tourneo minibus collided with a white articulated lorry around 4.45pm, before hitting the central reservation. The girl in the minibus was rushed to a Carlisle hospital, where she died. A 42-year-old woman and a 17-year-old boy remain in hospital after being taken by air ambulance to separate clinics, police said on Tuesday. The other four occupants

of the vehicle – a six-month old baby girl, a seven-year-old boy, a 12-year-old boy, and the 45-year-old driver of the minibus – were all taken to hospital, where they were treated for minor injuries. Police have now launched an appeal into the circumstances of the collision, urging those who were travelling on the road at the time to get in touch. “Our thoughts and condolences are with the family involved in this devastating incident, and specialist officers are supporting them during this time,” said Sergeant Jonny Edgar from the Road Policing Unit. “An investigation is underway to establish the full circumstances surrounding

the crash and it is important we speak to anyone who was on the road at the time, and may have witnessed what happened or observed the minibus beforehand. “We would also urge any motorists with dashcams who were travelling on the M74 on Wednesday afternoon to please check their footage in case they have captured anything which could be of significance to our enquiries.” The road was closed for approximately 12 hours while police carried out their investigations, reopening around 4.40am last Thursday. Anyone with information is asked to contact Police Scotland through 101, quoting incident number 2612 of Wednesday, 21 July 2021.

And don’t forget to leave a gift to World Jewish Relief in your Will you can help end jewish poverty For more information about leaving a gift in your Will, or about our Free Will service, please contact Richard Budden richardb@worldjewishrelief.org 020 8736 1250

Alta, two, granted US visa majority leader, has written A severely disabled two-yearto the British ambassador to old girl from Manchester who a Washington, Karen Pierce, for court ruled had no prospect of the suspension of “health decirecovery has been granted an sions against the wishes of the American visa in order to receive family”. He has also secured her treatment in the country – if she a visa if she is allowed to travel. is allowed to travel. Yossi Gestetner, a family Alta Fixsler has been on life Alta’s parents want her to friend in the US, said the family support at Manchester’s Royal be treated in the US believed the ruling left it open Children’s Hospital since birth, and has “no conscious awareness”, according t for Health Secretary Sajid Javid to issue an order allowing the family to move the child. o medics. A group of Republican senators has asked Doctors were granted an order, confirmed at the Court of Appeal earlier this month, to allow President Biden to intervene directly with Boris Alta to die, saying it is in her best interests. But Johnson, while New Jersey’s senators say the her father, Abraham, has dual Israeli and Amer- state’s Phoenix Centre for Rehabilitation and ican nationality and Chuck Schumer, the Senate Paediatrics is willing to take Alta.

The former Archbishop of Canterbury, Lord Rowan Williams, has been given an honorary doctorate by a university in recognition of his work in religious life. Rabbi Alex Goldberg, Surrey University’s Dean

of Religious Life and Belief, presented Williams to the university for the award. Williams, who helped to create the university’s chaplaincy team, said: “Real lifegiving humanism is a vision of global generosity: shared

work, shared hope, shared success, shared service. “The neighbour on the other side of the world is not someone else’s business”. Goldberg praised him as “one of the great public intellectuals of our time”.