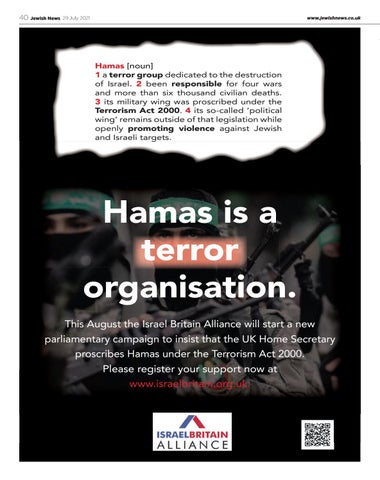 Hamas [noun] 1 a terror group dedicated to the destruction of Israel. 2 been responsible for four wars and more than six thousand civilian deaths. 3 its military wing was proscribed under the Terrorism Act 2000. 4 its so-called ‘political wing’ remains outside of that legislation while openly promoting violence against Jewish and Israeli targets.

Hamas is a terror organisation. This August the Israel Britain Alliance will start a new parliamentary campaign to insist that the UK Home Secretary proscribes Hamas under the Terrorism Act 2000. Please register your support now at www.israelbritain.org.uk.