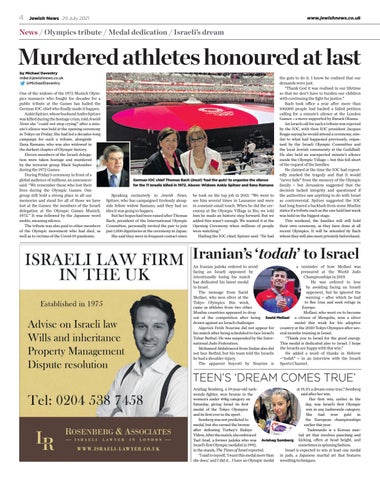 One of the widows of the 1972 Munich Olympics massacre who fought for decades for a public tribute at the Games has hailed the German IOC chief who finally made it happen. Ankie Spitzer, whose husband Andre Spitzer was killed during the hostage crisis, told Jewish News she “could not stop crying” after a minute’s silence was held at the opening ceremony in Tokyo on Friday. She had led a decades-long campaign for such a tribute, alongside Ilana Ramano, who was also widowed in the darkest chapter of Olympic history. Eleven members of the Israeli delegation were taken hostage and murdered by the terrorist group Black September during the 1972 Games. During Friday’s ceremony in front of a global audience of millions, an announcer said: “We remember those who lost their lives during the Olympic Games. One group still hold a strong place in all our memories and stand for all of those we have lost at the Games: the members of the Israeli delegation at the Olympic Games Munich, 1972.” It was followed by the Japanese word mokto, meaning silence. The tribute was also paid to other members of the Olympic movement who had died, as well as to victims of the Covid-19 pandemic.

German IOC chief Thomas Bach (inset) ‘had the guts’ to organise the silence for the 11 Israelis killed in 1972. Above: Widows Ankie Spitzer and Ilana Ramano

Speaking exclusively to Jewish News, Spitzer, who has campaigned tirelessly alongside fellow widow Ramano, said they had no idea it was going to happen. But her hopes had been raised after Thomas Bach, president of the International Olympic Committee, personally invited the pair to join just 1,000 dignitaries at the ceremony in Japan. She said they were in frequent contact since

he took on the top job in 2013. “We went to see him several times in Lausanne and were in constant email touch. When he did the ceremony at the Olympic Village in Rio, we told him he made an historic step forward. But we added this wasn’t enough. We wanted it at the Opening Ceremony when millions of people were watching.” Hailing the IOC chief, Spitzer said: “He had

the guts to do it. I know he realised that our demands were just. “Thank God it was realised in our lifetime so that we don’t have to burden our children with continuing the fight for justice.” Bach took office a year after more than 100,000 people had backed a failed petition calling for a minute’s silence at the London Games – a move supported by Barack Obama. An Israeli call for such a tribute was rejected by the IOC, with then IOC president Jacques Rogge saying he would attend a ceremony, similar to what had happened previously, organised by the Israeli Olympic Committee and the local Jewish community at the Guildhall. He also held an unexpected minute’s silence inside the Olympic Village – but this fell short of the request of the families. He claimed at the time the IOC had repeatedly marked the tragedy and that it would “never fade” from the memory of the Olympic family – but Jerusalem suggested that the decision lacked integrity and questioned if the authorities saw anything to do with Israel as controversial. Spitzer suggested the IOC had long feared a backlash from some Muslim states if a tribute such as the one held last week was held on the biggest stage. This weekend, the families will still hold their own ceremony, as they have done at all recent Olympics. It will be attended by Bach whom they will also meet privately beforehand.

Iranian’s ‘todah’ to Israel a reminder of how Mollaei was An Iranian judoka ordered to avoid pressured at the World Judo facing an Israeli opponent by Championships in 2019. intentionally losing his match He was ordered to lose has dedicated his latest medal by avoiding facing an Israeli to Israel. opponent, but he ignored the The message from Saeid warning – after which he had Mollaei, who won silver at the to flee Iran and seek refuge in Tokyo Olympics this week, Europe. came as athletes from two other Mollaei, who went on to become Muslim countries appeared to drop out of the competition after being Saeid Mollaei a citizen of Mongolia, won a silver medal this week for his adoptive drawn against an Israeli challenger. Algeria’s Fetih Nourine did not appear for country at the 2020 Tokyo Olympics after sevhis match after being scheduled to face Israel’s eral months training in Israel. “Thank you to Israel for the good energy. Tohar Butbul. He was suspended by the InterThis medal is dedicated also to Israel. I hope national Judo Federation. Mohamed Abdalrasool from Sudan also did the Israelis are happy with this win.” He added a word of thanks in Hebrew not face Butbul, but his team told the Israelis –“todah” – in an interview with the Israeli he had a shoulder injury. The apparent boycott by Nourine is Sports Channel.

TEEN’S ‘DREAM COMES TRUE’ at 19, it’s a dream come true,” Semberg Avishag Semberg, a 19-year-old taeksaid after her win. wondo fighter, won bronze in the Her first win, earlier in the women’s under 49kg category on day, was Israel’s first Olympic Saturday, giving Israel its first win in any taekwondo category. medal of the Tokyo Olympics She had won gold in and its first ever in the sport. the European championships Semberg was not predicted to earlier this year. medal, but she earned the bronze Taekwando is a Korean marafter defeating Turkey’s Rukiye tial art that involves punching and Yldrm. After the match, she embraced Yael Arad, a former judoka who was Avishag Semberg kicking, often at head height, and sometimes in spinning fashion. Israel’s first Olympic medalist in 1992, Israel is expected to win at least one medal in the stands, The Times of Israel reported. “I said to myself, ‘I want this medal more than in judo, a Japanese martial art that features she does,’ and I did it… I have an Olympic medal wrestling techniques.