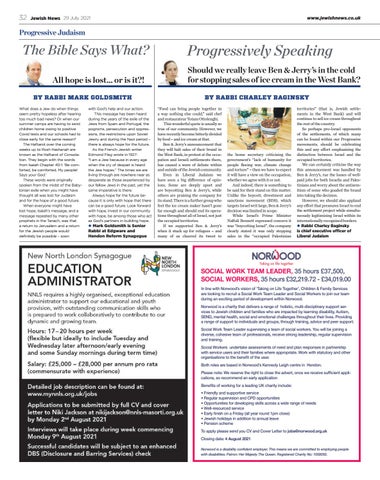 The Bible Says What? All hope is lost… or is it?! BY RABBI MARK GOLDSMITH What does a Jew do when things seem pretty hopeless after hearing too much bad news? Or when our summer camps are having to send children home owing to positive Covid tests and our schools had to close early for the same reason? The Haftarot over the coming weeks up to Rosh Hashanah are known as the Haftarot of Consolation. They begin with the words from Isaiah Chapter 40:1: ‘Be comforted, be comforted, My people! Says your God.’ These words were originally spoken from the midst of the Babylonian exile when you might have thought all was lost for Judaism and for the hope of a good future. When everyone might have lost hope, Isaiah’s message, and a message repeated by many other prophets in the Tanach, was that a return to Jerusalem and a return for the Jewish people would definitely be possible – soon

with God’s help and our action. This message has been heard during the years of the exile of the Jews from Spain and Portugal, the pogroms, persecution and oppressions, the restrictions upon Soviet Jewry and during the Nazi period – there is always hope for the future. As the French-Jewish writer Edmond Fleg wrote in 1927: “I am a Jew because in every age when the cry of despair is heard the Jew hopes.’’ The times we are living through are nowhere near as desperate as those experienced by our fellow Jews in the past, yet the same imperative is there. Always hope for the future because it is only with hope that there can be a good future. Look forward with hope, invest in our community with hope, be among those who act as God’s partners in building hope.

Progressively Speaking Should we really leave Ben & Jerry’s in the cold for stopping sales of ice cream in the West Bank? BY RABBI CHARLEY BAGINSKY “Food can bring people together in a way nothing else could,” said chef and restaurateur Yotam Ottolenghi. This wonderful quote is usually so true of our community. However, we have recently become bitterly divided by food – and ice cream at that. Ben & Jerry’s announcement that they will halt sales of their brand in the West Bank, in protest at the occupation and Israeli settlements there, has caused a wave of debate within and outside of the Jewish community. Even in Liberal Judaism we have seen a big difference of opinions. Some are deeply upset and are boycotting Ben & Jerry’s, while others are praising the company for its stand. There is a further group who feel the ice cream maker hasn’t gone far enough and should end its operations throughout all of Israel, not just the occupied territories. If we supported Ben & Jerry’s when it stuck up for refugees – and many of us cheered its tweet to

the home secretary criticising the government’s “lack of humanity for people fleeing war, climate change and torture” – then we have to expect it will have a view on the occupation, whether we agree with it or not. And indeed, there is something to be said for their stand on this matter. Unlike the boycott, divestment and sanctions movement (BDS), which targets Israel writ large, Ben & Jerry’s decision was limited in scope. While Israel’s Prime Minister Naftali Bennett expressed concern it was “boycotting Israel”, the company clearly stated it was only stopping sales in the “occupied Palestinian

territories” (that is, Jewish settlements in the West Bank) and will continue to sell ice cream throughout the rest of the country. So perhaps pro-Israel opponents of the settlements, of which many can be found within our Progressive movements, should be celebrating this and any effort emphasising the distinction between Israel and the occupied territories. We can certainly criticise the way this announcement was handled by Ben & Jerry’s, rue the losses of wellpaid jobs for both Israelis and Palestinians and worry about the antisemitism of some who goaded the brand into taking the decision. However, we should also applaud any effort that pressures Israel to end the settlement project while simultaneously legitimising Israel within its internationally recognised borders. ◆ Rabbi Charley Baginsky is chief executive officer of Liberal Judaism

SOCIAL WORK TEAM LEADER, 35 hours £37,500, SOCIAL WORKERS, 35 hours £32,219.72 - £34,019.00 In line with Norwood’s vision of ‘Taking on Life Together’, Children & Family Services are looking to recruit a Social Work Team Leader and Social Workers to join our team during an exciting period of development within Norwood. Norwood is a charity that delivers a range of holistic, multi-disciplinary support services to Jewish children and families who are impacted by learning disability, Autism, SEND, mental health, social and emotional challenges throughout their lives. Providing a range of support to individuals and groups, through training, advice and peer support. Social Work Team Leader supervising a team of social workers. You will be joining a diverse, cohesive team of professionals, receive strong leadership, regular supervision and training. Social Workers undertake assessments of need and plan responses in partnership with service users and their families where appropriate. Work with statutory and other organisations to the benefit of the user. Both roles are based in Norwood’s Kennedy Leigh centre in Hendon. Please note: We reserve the right to close the advert, once we receive sufficient applications, so recommend an early application Benefits of working for a leading UK charity include: • Friendly and supportive service • Regular supervision and CPD opportunities • Opportunities for developing skills across a wide range of needs • Well-resourced service • Early finish on a Friday (all year round 1pm close) • Jewish holidays in addition to annual leave • Pension scheme To apply please send you CV and Cover Letter to jobs@norwood.org.uk Closing date: 4 August 2021 Norwood is a disability confident employer. This means we are committed to employing people with disabilities. Patron: Her Majesty The Queen. Registered Charity No: 1059050.