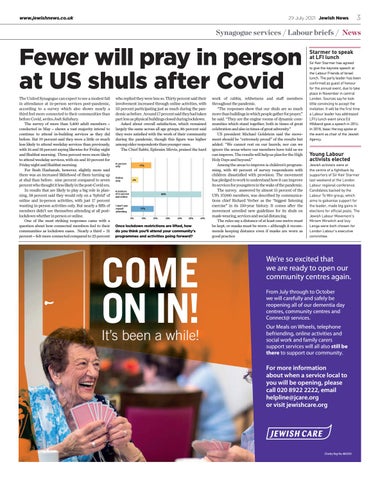 Fewer will pray in person at US shuls after Covid The United Synagogue can expect to see a modest fall in attendance at in-person services post-pandemic, according to a survey which also shows nearly a third feel more connected to their communities than before Covid, writes Josh Salisbury. The survey of more than 5,400 adult members – conducted in May – shows a vast majority intend to continue to attend in-building services as they did before. But 19 percent said they were a little or much less likely to attend weekday services than previously, with 16 and 18 percent saying likewise for Friday night and Shabbat morning. Three percent were more likely to attend weekday services, with six and 10 percent for Friday night and Shabbat morning. For Rosh Hashanah, however, slightly more said there was an increased likliehood of them turning up at shul than before: nine percent compared to seven percent who thought it less likely in the post-Covid era. In results that are likely to play a big role in planning, 58 percent said they would rely on a ‘hybrid’ of online and in-person activities, with just 17 percent wanting in-person activities only. But nearly a fifth of members didn’t see themselves attending at all postlockdown whether in person or online. One of the most striking responses came with a question about how connected members feel to their communities as lockdown eases. Nearly a third – 31 percent – felt more connected compared to 25 percent

who replied they were less so. Thirty percent said their involvement increased through online activities, with 53 percent participating just as much during the pandemic as before. Around 17 percent said they had taken part less as physical buildings closed during lockdown. Asked about overall satisfaction, which remained largely the same across all age groups, 86 percent said they were satisfied with the work of their community during the pandemic, though this figure was higher among older respondents than younger ones. The Chief Rabbi, Ephraim Mirvis, praised the hard In person only

A mixture of in person and online

I don’t see myself attending

Once lockdown restrictions are lifted, how do you think you’ll attend your community’s programmes and activities going forward?

COME ON IN! It’s been a while!

work of rabbis, rebbetzens and staff members throughout the pandemic. “The responses show that our shuls are so much more than buildings in which people gather for prayer,” he said. “They are the engine rooms of dynamic communities which stand together, both in times of great celebration and also in times of great adversity.” US president Michael Goldstein said the movement should be “extremely proud” of the results but added: “We cannot rest on our laurels, nor can we ignore the areas where our members have told us we can improve. The results will help us plan for the High Holy Days and beyond.” Among the areas to improve is children’s programming, with 40 percent of survey respondents with children dissatisfied with provision. The movement has pledged to work to understand how it can improve its services for youngsters in the wake of the pandemic. The survey, answered by almost 15 percent of the US’s 37,000 members, was described by communications chief Richard Verber as the “biggest listening exercise” in its 150-year history. It comes after the movement unveiled new guidelines for its shuls on mask-wearing, services and social distancing. The rules say a distance of at least one metre must be kept, or masks must be worn – although it recommends keeping distance even if masks are worn as good practice

Starmer to speak at LFI lunch Sir Keir Starmer has agreed to give the keynote speech at the Labour Friends of Israel lunch. The party leader has been confirmed as guest of honour for the annual event, due to take place in November in central London. Sources say he took little convincing to accept the invitation. It will be the first time a Labour leader has addressed LFI’s lunch event since Ed Miliband gave a speech in 2014. In 2018, Issac Herzog spoke at the event as chair of the Jewish Agency.

Young Labour activists elected Jewish activists were at the centre of a fightback by supporters of Sir Keir Starmer last weekend at the London Labour regional conference. Candidates backed by the Labour To Win group, which aims to galvanise support for the leader, made big gains in elections for official posts. The Jewish Labour Movement’s Miriam Mirwitch and Izzy Lenga were both chosen for London Labour’s executive committee.

We’re so excited that we are ready to open our community centres again. From July through to October we will carefully and safely be reopening all of our dementia day centres, community centres and Connect@ services. Our Meals on Wheels, telephone befriending, online activities and social work and family carers support services will all also still be there to support our community.

For more information about when a service local to you will be opening, please call 020 8922 2222, email helpline@jcare.org or visit jewishcare.org