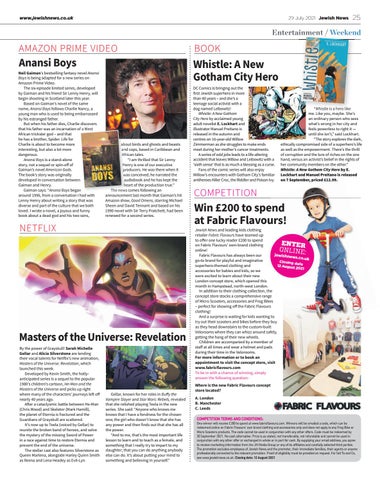 Neil Gaiman’s bestselling fantasy novel Anansi Boys is being adapted for a new series on Amazon Prime Video. The six-episode limited series, developed by Gaiman and his friend Sir Lenny Henry, will begin shooting in Scotland later this year. Based on Gaiman’s novel of the same name, Anansi Boys follows Charlie Nancy, a young man who is used to being embarrassed by his estranged father. But when his father dies, Charlie discovers that his father was an incarnation of a West African trickster god – and that he has a brother, Spider. Life for Charlie is about to become more interesting, but also a lot more dangerous. Anansi Boys is a stand-alone story, not a sequel or spin-off of Gaiman’s novel American Gods. The book’s story was originally developed in conversation between Gaiman and Henry. Gaiman says: “Anansi Boys began around 1996, from a conversation I had with Lenny Henry about writing a story that was diverse and part of the culture that we both loved. I wrote a novel, a joyous and funny book about a dead god and his two sons,

about birds and ghosts and beasts and cops, based in Caribbean and African tales. “I am thrilled that Sir Lenny Henry is one of our executive producers. He was there when it was conceived, he narrated the audiobook and he has kept the heart of the production true.” The news comes following an announcement last month that Gaiman’s hit Amazon show, Good Omens, starring Michael Sheen and David Tennant and based on his 1990 novel with Sir Terry Pratchett, had been renewed for a second series.

Masters of the Universe: Revelation By the power of Grayskull! Sarah Michelle Gellar and Alicia Silverstone are lending their vocal talents for Netflix’s new animation, Masters of the Universe: Revelation, which launched this week. Developed by Kevin Smith, the hotlyanticipated series is a sequel to the popular 1980’s children’s cartoon, He-Man and the Masters of the Universe and picks up right where many of the characters’ journeys left off nearly 40 years ago. After a cataclysmic battle between He-Man (Chris Wood) and Skeletor (Mark Hamill), the planet of Eternia is fractured and the Guardians of Grayskull are scattered. It’s now up to Teela (voiced by Gellar) to reunite the broken band of heroes, and solve the mystery of the missing Sword of Power in a race against time to restore Eternia and prevent the end of the universe. The stellar cast also features Silverstone as Queen Marlena, alongside Harley Quinn Smith as Ileena and Lena Headey as Evil-Lyn.

Gellar, known for her roles in Buffy the Vampire Slayer and Star Wars: Rebels, revealed that she relished playing Teela in the new series. She said: “Anyone who knows me knows that I have a fondness for the chosen one; the girl who doesn’t know that she has any power and then finds out that she has all the power. “And to me, that’s the most important life lesson to learn and to teach as a female, and something that I really try to impart to my daughter; that you can do anything anybody else can do. It’s about putting your mind to something and believing in yourself.”

DC Comics is bringing out the first Jewish superhero in more than 40 years – and she’s a teenage social activist with a dog named Leibowitz! Whistle: A New Gotham City Hero by acclaimed young adult novelist E. Lockhart and illustrator Manuel Preitano is released in the autumn and centres on 16-year-old Willow Zimmerman as she struggles to make ends meet during her mother’s cancer treatments. A series of odd jobs leads to a life-altering accident that leaves Willow and Leibowitz with a ‘sixth sense’ that is as much a blessing as a curse. Fans of the comic series will also enjoy Willow’s encounters with Gotham City’s familiar antiheroes Killer Croc, the Riddler and Poison Ivy.

“Whistle is a hero like me. Like you, maybe. She’s an ordinary person who sees what’s wrong in her city and feels powerless to right it — until she isn’t,” said Lockhart. “The story explores the dark, ethically compromised side of a superhero’s life as well as the empowerment. There’s the thrill of corruption and the lure of riches on the one hand, versus an activist’s belief in the rights of her community members on the other.” Whistle: A New Gotham City Hero by E. Lockhart and Manuel Preitano is released on 7 September, priced £12.99.

Win £200 to spend at Fabric Flavours!

Jewish News and leading kids clothing retailer Fabric Flavours have teamed up to offer one lucky reader £200 to spend ENTER on Fabric Flavours’ own-brand clothing ONLINE: online! jewishne Fabric Flavours has always been our ws.co.uk go-to brand for playful and imaginative Closing d a 12 August te superhero-themed clothing and 2021 accessories for babies and kids, so we were excited to learn about their new London concept store, which opened this month in Hampstead, north-west London. In addition to their clothing collection, the concept store stocks a comprehensive range of Micro Scooters, accessories and Frog Bikes – perfect for showing off the Fabric Flavours clothing! And a surprise is waiting for kids wanting to try out their scooters and bikes before they buy as they head downstairs to the custom-built Velorooms where they can whizz around safely, getting the hang of their new wheels. Children are accompanied by a member of staff at all times and wear a helmet and pads during their time in the Velorooms. For more information or to book an appointment to visit the concept store, visit www.fabricflavours.com To be in with a chance of winning, simply answer the following question: Where is the new Fabric Flavours concept store located? A. London B. Manchester C. Leeds

One winner will receive £200 to spend at www.fabricflavours.com. Winners will be emailed a code, which can be redeemed online on Fabric Flavours’ own brand clothing and accessories only and does not apply to any Frog Bike or Micro Scooters products. The code cannot be used in conjunction with any other offers. Code must be redeemed by 30 September 2021. No cash alternative. Prize is as stated, not transferable, not refundable and cannot be used in conjunction with any other offer or exchanged in whole or in part for cash. By supplying your email address, you agree to receive marketing information from the JN Media Group or any of its affiliates and carefully selected third parties. The promotion excludes employees of Jewish News and the promoter, their immediate families, their agents or anyone professionally connected to the relevant promotion. Proof of eligibility must be provided on request. For full Ts and Cs, see www.jewishnews.co.uk. Closing date: 12 August 2021