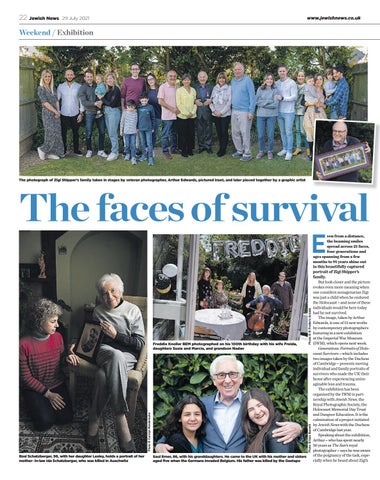 The photograph of Zigi Shipper’s family taken in stages by veteran photographer, Arthur Edwards, pictured inset, and later pieced together by a graphic artist

The faces of survival

Rosl Schatzberger, 96, with her daughter Lesley, holds a portrait of her mother- in-law Ida Schatzberger, who was killed in Auschwitz

Freddie Knoller BEM photographed on his 100th birthday with his wife Freida, daughters Susie and Marcia, and grandson Nadav

Saul Erner, 86, with his granddaughters. He came to the UK with his mother and sisters aged five when the Germans invaded Belgium. His father was killed by the Gestapo

ven from a distance, the beaming smiles spread across 21 faces, four generations and ages spanning from a few months to 91 years shine out in this beautifully captured portrait of Zigi Shipper’s family. But look closer and the picture evokes even more meaning when one considers nonagenarian Zigi was just a child when he endured the Holocaust – and none of these individuals would be here today had he not survived. The image, taken by Arthur Edwards, is one of 13 new works by contemporary photographers featuring in a new exhibition at the Imperial War Museum (IWM), which opens next week. Generations: Portraits of Holocaust Survivors – which includes two images taken by the Duchess of Cambridge – presents moving individual and family portraits of survivors who made the UK their home after experiencing unimaginable loss and trauma. The exhibition has been organised by the IWM in partnership with Jewish News, the Royal Photographic Society, the Holocaust Memorial Day Trust and Dangoor Education. It is the culmination of a project initiated by Jewish News with the Duchess of Cambridge last year. Speaking about the exhibition, Arthur – who has spent nearly 50 years as The Sun’s royal photographer – says he was aware of the poignancy of the task, especially when he heard about Zigi’s