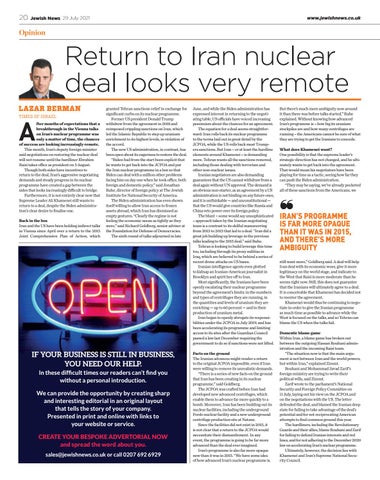 fter months of expectations that a breakthrough in the Vienna talks on Iran’s nuclear programme was only a matter of time, the chances of success are looking increasingly remote. This month, Iran’s deputy foreign minister said negotiations on restoring the nuclear deal will not resume until the hardliner Ebrahim Raisi takes office as president on 5 August. Though both sides have incentives to return to the deal, Iran’s aggressive negotiating demands and steady progress in its nuclear programme have created a gap between the sides that looks increasingly difficult to bridge. Furthermore, it is not entirely clear now that Supreme Leader Ali Khamenei still wants to return to a deal, despite the Biden administration’s clear desire to finalise one. Back in the box Iran and the US have been holding indirect talks in Vienna since April over a return to the 2015 Joint Comprehensive Plan of Action, which

granted Tehran sanctions relief in exchange for significant curbs on its nuclear programme. Former US president Donald Trump withdrew from the agreement in 2018 and reimposed crippling sanctions on Iran, which led the Islamic Republic to step up uranium enrichment to its highest levels, in violation of the accord. The new US administration, in contrast, has been open about its eagerness to restore the deal. “Biden had from the start been explicit that he wants to get back into the JCPOA and put the Iran nuclear programme in a box so that Biden can deal with a million other problems facing him on day one when he took office, both foreign and domestic policy,” said Jonathan Ruhe, director of foreign policy at The Jewish Institute for National Security of America. The Biden administration has even shown itself willing to allow Iran access to frozen assets abroad, which Iran has dismissed as empty gestures. “Clearly the regime is not feeling the economic noose as tightly as they were,” said Richard Goldberg, senior adviser at the Foundation for Defense of Democracies. The sixth round of talks adjourned in late

IF YOUR BUSINESS IS STILL IN BUSINESS, YOU NEED OUR HELP. In these difficult times our readers can’t find you without a personal introduction. We can provide the opportunity by creating sharp and interesting editorial in an original layout that tells the story of your company. Presented in print and online with links to your website or service. CREATE YOUR BESPOKE ADVERTORIAL NOW and spread the word about you. sales@jewishnews.co.uk or call 0207 692 6929

June, and while the Biden administration has expressed interest in returning to the negotiating table, US officials have voiced increasing pessimism about the chances for an agreement. The equation for a deal seems straightforward: Iran rolls back its nuclear programme to the terms laid out in great detail by the JCPOA, while the US rolls back most Trumpera sanctions. But Iran – or at least the hardline elements around Khamenei – is demanding more. Tehran wants all the sanctions removed, including those dealing with terrorism and other non-nuclear issues. Iranian negotiators are also demanding guarantees that the US cannot withdraw from a deal again without UN approval. The demand is an obvious non-starter, as an agreement by a US administration is not binding on any future ones, and it is unthinkable — and unconstitutional — that the US would give countries like Russia and China veto power over its foreign policy. The blunt – some would say unsophisticated – approach taken by the Iranian negotiating team is a contrast to its skilful manoeuvring from 2013 to 2015 that led to a deal. “Iran did a great job building up leverage in the previous talks leading to the 2015 deal,” said Ruhe. Tehran is looking to build leverage this time too, including through its proxy militias in Iraq, which are believed to be behind a series of recent drone attacks on US bases. Iranian intelligence agents even plotted to kidnap an Iranian-American journalist in Brooklyn and spirit her off to Iran. Most significantly, the Iranians have been openly escalating their nuclear programme beyond the agreement’s limits: in the numbers and types of centrifuges they are running, in the quantities and levels of uranium they are enriching — up to 60 percent — and in their production of uranium metal. Iran began to openly abrogate its responsibilities under the JCPOA in July 2019, and has been accelerating its programme and limiting access to its sites after the Guardian Council passed a law last December requiring the government to do so if sanctions were not lifted. Facts on the ground The Iranian advances might render a return to the original JCPOA impossible, even if Iran were willing to remove its unrealistic demands. “There is a series of new facts on the ground that Iran has been creating in its nuclear programme,” said Goldberg. The JCPOA was crafted before Iran had developed new advanced centrifuges, which enable them to advance far more quickly to a bomb. Moreover, Iran has been building out its nuclear facilities, including the underground Fordo nuclear facility and a new underground centrifuge production site at Natanz. Since the facilities did not exist in 2015, it is not clear that a return to the JCPOA would necessitate their dismantlement. In any event, the programme is going to be far more advanced than the deal ever imagined. Iran’s programme is also far more opaque now than it was in 2015. “We have some idea of how advanced Iran’s nuclear programme is.

But there’s much more ambiguity now around it than there was before talks started,” Ruhe explained. Without knowing how advanced Iran’s programme is – how big its uranium stockpiles are and how many centrifuges are running – the Americans cannot be sure of what they are trying to get the Iranians to concede. What does Khamenei want? One possibility is that the supreme leader’s strategic direction has not changed, and he ultimately wants to get back into the agreement. That would mean his negotiators have been playing for time as a tactic, seeing how far they can push the Biden administration. “They may be saying, we’ve already pocketed all of these sanctions from the Americans, we

IRAN’S PROGRAMME IS FAR MORE OPAQUE THAN IT WAS IN 2015, AND THERE’S MORE AMBIGUITY

still want more,” Goldberg said. A deal will help Iran deal with its economic woes, give it more legitimacy on the world stage, and indicate to the West that Raisi is more moderate than he seems right now. Still, this does not guarantee that the Iranians will ultimately agree to a deal. It is conceivable that Khamenei has decided not to reenter the agreement. Khamenei would thus be continuing to negotiate in order to give the Iranian programme as much time as possible to advance while the West is focused on the talks, and so Tehran can blame the US when the talks fail. Domestic blame game Within Iran, a blame game has broken out between the outgoing Hassan Rouhani administration and the incoming Raisi team. “The situation now is that the main argument is not between Iran and the world powers, but within Iran,” explained Zimmt. Rouhani and Mohammad Javad Zarif’s foreign ministry are trying to write their political wills, said Zimmt. Zarif wrote to the parliament’s National Security and Foreign Policy Committee on 11 July, laying out his view on the JCPOA and on the negotiations with the US. The letter defended the deal, and blamed the Iranian deep state for failing to take advantage of the deal’s potential and for not reciprocating American attempts to find common ground this year. The hardliners, including the Revolutionary Guards and their allies, blame Rouhani and Zarif for failing to defend Iranian interests and red lines, and for not adhering to the December 2020 law on accelerating Iran’s nuclear programme. Ultimately, however, the decision lies with Khamenei and Iran’s Supreme National Security Council.