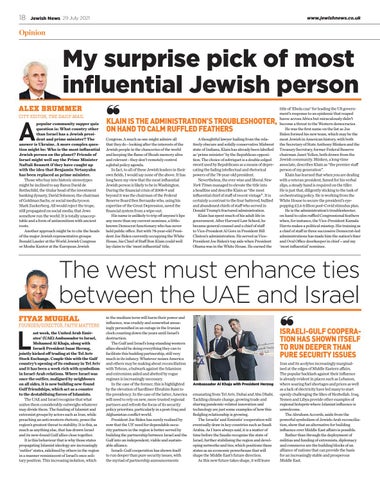 My surprise pick of most influential Jewish person ALEX BRUMMER

popular community supper quiz question is: What country other than Israel has a Jewish president and prime minister? The answer is Ukraine. A more complex question might be: Who is the most influential Jewish person on the planet? Friends of Israel might well say the Prime Minister Naftali Bennett if they have caught up with the idea that Benjamin Netanyahu has been replaced as prime minister. Those who buy into historic stereotypes might be inclined to say Baron David de Rothschild, the titular head of the investment banking dynasty, David Solomon, the chairman of Goldman Sachs, or social media tycoon Mark Zuckerberg. All would reject the trope, still propagated on social media, that Jews somehow run the world. It is totally unacceptable and a form of antisemitism with ancient roots. Another approach might be to cite the heads of the major Jewish representative groups: Ronald Lauder at the World Jewish Congress or Moshe Kantor at the European Jewish

KLAIN IS THE ADMINISTRATION’S TROUBLESHOOTER, ON HAND TO CALM RUFFLED FEATHERS

Congress. A much as one might admire all that they do - looking after the interests of the Jewish people in the chanceries of the world and keeping the flame of Shoah memory alive and relevant - they don’t remotely control a global policy agenda. In fact, to all of these Jewish leaders in their own fields, I would say none of the above. It has long been my view that the most influential Jewish person is likely to be in Washington. During the financial crisis of 2008-9 and beyond it was the chairman of the Federal Reserve Board Ben Bernanke who, using his expertise of the Great Depression, saved the financial system from a wipe-out. His name is unlikely to trip off anyone’s lips any more than my current nominee, a littleknown Democrat functionary who has never held public office. But with 78-year-old President Joe Biden currently occupying the White House, his Chief of Staff Ron Klain could well lay claim to the ‘most influential’ title.

A thoughtful lawyer hailing from the relatively obscure and solidly conservative Midwest state of Indiana, Klain has already been labelled as ‘prime minister’ by the Republican opposition. The choice of sobriquet is a double-edged sword used by Republicans as a means of deprecating the fading intellectual and rhetorical powers of the 78-year-old president. Nevertheless, the ever wise and liberal New York Times managed to elevate the title into a headline and describe Klain as “the most influential chief of staff of recent vintage”. It is certainly a contrast to the four battered, bullied and abandoned chiefs of staff who served in Donald Trump’s fractured administration. Klain has spent much of his adult life in government. After Harvard Law School, he became general counsel and a chief of staff to Vice-President Al Gore in President Bill Clinton’s administration. He served as VicePresident Joe Biden’s top aide when President Obama was in the White House. He earned the

title of ‘Ebola czar’ for leading the US government’s response to an epidemic that reaped havoc across Africa but miraculously didn’t become a threat to the Western democracies. He was the first name on the list as Joe Biden formed his new team, which may be the most Jewish in American history, with both the Secretary of State Anthony Blinken and the Treasury Secretary, former Federal Reserve chairman Janet Yellen, both drawn from the Jewish community. Blinken, a long-time associate, describes Klain as “the premier staff person of my generation”. Klain has learned that when you are dealing with a veteran president, famed for his verbal slips, a steady hand is required on the tiller. He is just that, diligently sticking to the task of orchestrating policy. He is working from the White House to secure the president’s eyepopping £2.6 trillion post-Covid stimulus plan. He is the administration’s troubleshooter, on hand to calm ruffled Congressional feathers when, for instance, the Vice-President Kamala Harris makes a political misstep. His training as a chief of staff in three successive Democrat-led administrations has made him the nation’s fixer and Oval Office doorkeeper in chief – and my ‘most influential’ nominee.

ast week, the United Arab Emirates’ (UAE) Ambassador to Israel, Mohamed Al Khaja, along with Israeli President Isaac Herzog, jointly kicked off trading at the Tel Aviv Stock Exchange. Couple this with the Gulf country’s opening of its embassy in Tel Aviv and it has been a week rich with symbolism in Israel-Arab relations. Where Israel was once the outlier, maligned by neighbours on all sides, it is now building new-found Gulf friendships, which act as a counter to the destabilising forces of Islamists. The UAE and Israel recognise that what unites them considerably outweighs whatever may divide them. The funding of Islamist and extremist groups by actors such as Iran, while preaching an anti-western rhetoric, poses the region’s greatest threat to stability. It is this, as much as anything else, that has drawn Israel and its new-found Gulf allies close together. It is this behaviour that is why those states propagating Islamist ideology are increasingly ‘outlier’ states, sidelined by others in the region in a manner reminiscent of Israel’s once solitary position. This increasing isolation, which

in the medium term will harm their power and influence, was crudely and somewhat amusingly personified in an outage in the Iranian clock counting down the years until Israel’s destruction. The Gulf and Israel’s long-standing western allies should be doing everything they can to facilitate this budding partnership, still very much in its infancy. Whatever noises America and others may be making about reconciliation with Tehran, a bulwark against the Islamism and extremism aided and abetted by rogue regimes is increasingly necessary. In the case of the former, this is highlighted by the elevation of hardliner Ebrahim Raisi to the presidency. In the case of the latter, America will need to rely on new, more trusted regional partners and refresh the focus of its security policy priorities, particularly in a post-Iraq and Afghanistan conflict world. President Joe Biden has surely realised by now that the US’ need for dependable security partners in the region is better served by building the partnership between Israel and the Gulf into an independent, viable and sustainable alliance. Israeli-Gulf cooperation has shown itself to run deeper than pure security issues, with the myriad of partnership announcements

emanating from Tel Aviv, Dubai and Abu Dhabi. Tackling climate change, growing trade and sharing pandemic-related innovation and technology are just some examples of how this fledgling relationship is growing. The Israelis’ and Emiratis’ cooperation will eventually draw in key countries such as Saudi Arabia. As I have always said, it is a matter of time before the Saudis recognise the state of Israel, further stabilising the region and developing networks and ties, which positions these states as an economic powerhouse that will shape the Middle East’s future direction. As this new future takes shape, it will leave

Iran and its acolytes increasingly marginalised at the edges of Middle Eastern affairs. The popular backlash against their influence is already evident in places such as Lebanon, where soaring fuel shortages and prices as well as a lack of electricity have led many to start openly challenging the likes of Hezbollah. Iraq, Yemen and Libya provide other examples of regional hotspots where Islamist influence is unwelcome. The Abraham Accords, aside from the powerful symbolism of Jewish-Arab reconciliation, show that an alternative for building influence over Middle East affairs is possible. Rather than through the deployment of militias and funding of extremists, diplomacy and commerce are the building blocks of an alliance of nations that can provide the basis for an increasingly stable and prosperous Middle East.