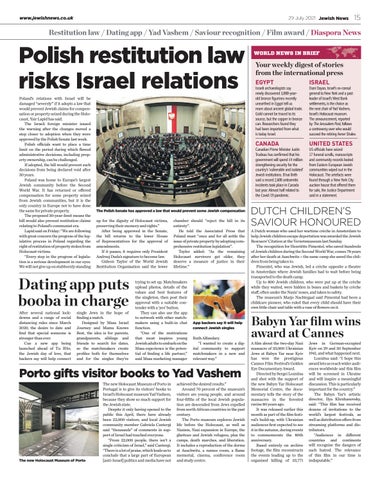 Polish restitution law risks Israel relations Poland’s relations with Israel will be damaged “severely” if it adopts a law that would prevent Jewish claims for compensation or property seized during the Holocaust, Yair Lapid has said. The Israeli foreign minister issued the warning after the changes moved a step closer to adoption when they were approved by the Polish Senate last week. Polish officials want to place a time limit on the period during which flawed administrative decisions, including property ownership, can be challenged. If adopted, the bill would prevent such decisions from being declared void after 30 years. Poland was home to Europe’s largest Jewish community before the Second World War. It has returned or offered compensation for some property seized from Jewish communities, but it is the only country in Europe not to have done the same for private property. The proposed 30-year-limit means the bill would also prevent restitution claims relating to Poland’s communist era. Lapid said on Friday: “We are following with great concern the progress of the legislative process in Poland regarding the right of restitution of property stolen from Holocaust victims. “Every step in the progress of legislation is a serious development in our eyes. We will not give up on stubbornly standing

up for the dignity of Holocaust victims, preserving their memory and rights.” After being approved in the Senate, the bill returns to the lower House of Representatives for the approval of amendments. If it passes, it requires only President Andrzej Duda’s signature to become law. Gideon Taylor of the World Jewish Restitution Organisation said the lower

single Jews in the hope of finding a match. Designed by Masa Israel Journey and Mama Knows Best, the idea is for parents, grandparents, siblings and friends to search for dates, so the matchmakers create profiles both for themselves and for the singles they’re

chamber should “reject the bill in its entirety”. He told the Associated Press that Poland must “once and for all settle the issue of private property by adopting comprehensive restitution legislation”. Taylor added: “As the remaining Holocaust survivors get older, they deserve a measure of justice in their lifetime.”

trying to set up. Matchmakers upload photos, details of the values and best features of the singleton, then post their approval with a suitable contender with a ‘yes’ button. They can also use the app to network with other matchmakers using a built-in chat function. “One of the motivations that most inspires young Jewish adults to embark on the Masa experience is the potential of finding a life partner,” said Masa marketing manager

Ruth Alfandary. “I wanted to create a digital community to support matchmakers in a new and relevant way.”

The new Holocaust Museum of Porto

Your weekly digest of stories from the international press EGYPT

The new Holocaust Museum of Porto in Portugal is to give its visitors’ books to Israel’s Holocaust museum Yad Vashem, because they show so much support for the Jewish state. Despite it only having opened to the public this April, there have already been 22,000 visitors, and local Jewish community member Gabriela Cantergi said “thousands” of comments in support of Israel had touched everyone. “From 22,000 people, there isn’t a single criticism of Israel,” said Cantergi. “There is a lot of praise, which leads us to conclude that a large part of European [anti-Israel] politics and media have not

achieved the desired results.” Around 70 percent of the museum’s visitors are young people, and around four-fifths of the local Jewish population are descended from Jews expelled from north African countries in the past century. The Porto museum explores Jewish life before the Holocaust, as well as Nazism, Nazi expansion in Europe, the ghettoes and Jewish refugees, plus the camps, death marches, and liberation. It includes a reproduction of the dorms at Auschwitz, a names room, a flame memorial, cinema, conference room and study centre.

Israeli archaeologists say newly discovered 3,000-yearold bronze figurines recently unearthed in Egypt tell us more about ancient global trade. Gold cannot be traced to its source, but the copper in bronze can. Researchers found they had been imported from what is today Israel.

Dani Dayan, Israel’s ex-consul general to New York and a past leader of Israel’s West Bank settlements, is the choice as the next chair of Yad Vashem, Israel’s Holocaust museum. The announcement, reported by The Jerusalem Post, follows a controversy over who would succeed the retiring Avner Shalev.

Dating app puts booba in charge After several national lockdowns and a range of social distancing rules since March 2020, the desire to date and find that special someone is stronger than ever. Cue a new app being launched ahead of Tu B’Av, the Jewish day of love, that backers say will help connect

US officials have seized 17 funeral scrolls, manuscripts and community records looted from Eastern European Jewish communities wiped out in the Holocaust. The artefacts were found through a New York City auction house that offered them for sale, the Justice Department said in a statement.

DUTCH CHILDREN’S SAVIOUR HONOURED A Dutch woman who used her wartime crèche in Amsterdam to help Jewish children escape deportation was awarded the Jewish Rescuers’ Citation at the Verzetsmuseum last Sunday. The recognition for Henriëtte Pimentel, who saved hundreds of Jewish children during the Second World War, comes 78 years after her death at Auschwitz – the same camp she saved the children from being taken to. Pimentel, who was Jewish, led a crèche opposite a theatre in Amsterdam where Jewish families had to wait before being transported to the death camp. Up to 800 Jewish children, who were put up at the crèche while they waited, were hidden in boxes and baskets by crèche staff, often under the Nazis’ noses, and taken to safety. The museum’s Marjo Nachtegaal said Pimental had been a childcare pioneer, who ruled that every child should have their own little chair and table with a vase of flowers on it.

A film about the two-day Nazi massacre of 33,000 Ukrainian Jews at Babyn Yar near Kyiv has won the prestigious Cannes Film Festival’s Golden Eye Documentary Award. Directed by Sergei Loznitsa and shot with the support of the new Babyn Yar Holocaust Memorial Centre, the documentary tells the story of the massacres in the forested ravine 80 years ago. It was released earlier this month as part of the film festival’s build-up, with Ukrainian audiences first expected to see it in the autumn, during events to commemorate the 80th anniversary. Based entirely on archive footage, the film reconstructs the events leading up to the organised killing of 33,771

Jews in German-occupied Kyiv on 29 and 30 September 1941, and what happened next. Loznitsa said: “I hope this award lets us reach wider audiences worldwide and this film will be screened in Ukraine and will inspire a meaningful discussion. This is particularly important for the country.” The Babyn Yar’s artistic director, Ilya Khrzhanovsky, said: “This film has received dozens of invitations to the world’s largest festivals, as well as distribution offers from streaming platforms and distributors. “Audiences in different countries and continents will recognise the dangers of such hatred. The relevance of this film in our time is indisputable.”