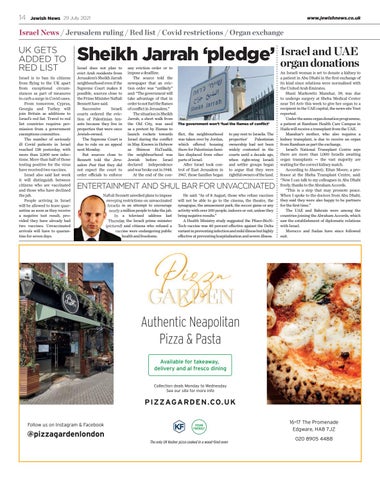 UK GETS ADDED TO RED LIST Israel is to ban its citizens from flying to the UK apart from exceptional circumstances as part of measures to curb a surge in Covid cases. From tomorrow, Cyprus, Georgia and Turkey will join Britain as additions to Israel’s red list. Travel to red list countries requires permission from a government exemptions committee. The number of seriously ill Covid patients in Israel reached 138 yesterday, with more than 2,000 new infections. More than half of those testing positive for the virus have received two vaccines. Israel also said last week it will distinguish between citizens who are vaccinated and those who have declined the jab. People arriving in Israel will be allowed to leave quarantine as soon as they receive a negative test result, provided they have already had two vaccines. Unvaccinated arrivals will have to quarantine for seven days.

and UAE Sheikh Jarrah ‘pledge’ Israel organ donations Israel does not plan to evict Arab residents from Jerusalem’s Sheikh Jarrah neighbourhood even if the Supreme Court makes it possible, sources close to the Prime Minister Naftali Bennett have said. Successive Israeli courts ordered the eviction of Palestinian tenants because they live in properties that were once Jewish-owned. The Supreme Court is due to rule on an appeal next Monday. But sources close to Bennett told the Jerusalem Post that they did not expect the court to order officials to enforce

any eviction order or to impose a deadline. The source told the newspaper that an eviction order was “unlikely” and: “The government will take advantage of that in order to not fuel the flames of conflict in Jerusalem.” The situation in Sheikh Jarrah, a short walk from the Old City, was used as a pretext by Hamas to launch rockets towards Israel during the conflict in May. Known in Hebrew as Shimon HaTzadik, the neighbourhood was Jewish before Israel declared independence and war broke out in 1948. At the end of the con-

The government won’t ‘fuel the flames of conflict’

flict, the neighbourhood was taken over by Jordan, which offered housing there for Palestinian families displaced from other parts of Israel. After Israel took control of East Jerusalem in 1967, those families began

to pay rent to Israelis. The properties’ Palestinian ownership had not been widely contested in the courts until a decade ago, when right-wing Israeli and settler groups began to argue that they were rightful owners of the land.

ENTERTAINMENT AND SHUL BAR FOR UNVACCINATED Naftali Bennett unveiled plans to impose sweeping restrictions on unvaccinated Israelis in an attempt to encourage nearly a million people to take the jab. In a televised address last Thursday, the Israeli prime minister (pictured) (pictured (pictured pictured)) said citizens who refused a vaccine were endangering public health and freedoms.

He said: “As of 8 August, those who refuse vaccines will not be able to go to the cinema, the theatre, the synagogue, the amusement park, the soccer game or any activity with over 100 people, indoors or out, unless they bring negative results.” A Health Ministry study suggested the Pfizer-BioNTech vaccine was 40 percent effective against the Delta variant in preventing infection and mild illness but highly effective at preventing hospitalisation and severe illness.

An Israeli woman is set to donate a kidney to a patient in Abu Dhabi in the first exchange of its kind since relations were normalised with the United Arab Emirates. Shani Markowitz Manshar, 39, was due to undergo surgery at Sheba Medical Center near Tel Aviv this week to give her organ to a recipient in the UAE capital, the news site Ynet reported. Under the same organ donation programme, a patient at Rambam Health Care Campus in Haifa will receive a transplant from the UAE. Manshar’s mother, who also requires a kidney transplant, is due to receive an organ from Rambam as part the exchange. Israel’s National Transplant Centre says there are more than 1,000 Israelis awaiting organ transplants — the vast majority are waiting for the correct kidney match. According to Haaretz, Eitan Moore, a professor at the Sheba Transplant Centre, said: “Now I can talk to my colleagues in Abu Dhabi freely, thanks to the Abraham Accords. “This is a step that may promote peace. When I spoke to the doctors from Abu Dhabi, they said they were also happy to be partners for the first time.” The UAE and Bahrain were among the countries joining the Abraham Accords, which saw the establishment of diplomatic relations with Israel. Morocco and Sudan have since followed suit.

The only UK Kosher pizza cooked in a wood-fired oven