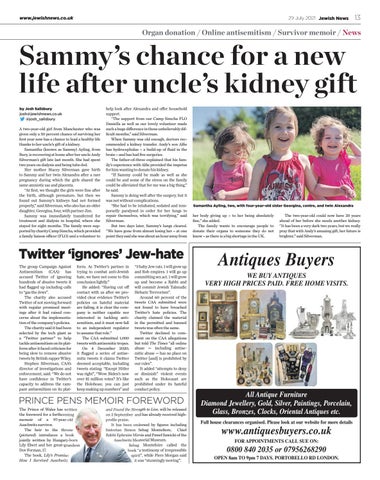 A two-year-old girl from Manchester who was given only a 50 percent chance of surviving her first year now has a chance to lead a healthy life thanks to her uncle’s gift of a kidney. Samantha (known as Sammy) Ayling, from Bury, is recovering at home after her uncle Andy Silverman’s gift late last month. She had spent two years on dialysis and being tube-fed. Her mother Stacey Silverman gave birth to Sammy and her twin Alexandra after a rare pregnancy during which the girls shared the same amniotic sac and placenta. “At first, we thought the girls were fine after the birth, although premature, but then we found out Sammy’s kidneys had not formed properly,” said Silverman, who also has an older daughter, Georgina, four, with partner Jim. Sammy was immediately transferred for treatment and dialysis in hospital, where she stayed for eight months. The family were supported by charity Camp Simcha, which provided a family liaison officer (FLO) and a volunteer to

help look after Alexandra and offer household support. “The support from our Camp Simcha FLO Daniella as well as our lovely volunteer made such a huge difference in those unbelievably difficult months,” said Silverman. When Sammy was old enough, doctors recommended a kidney transfer. Andy’s son Alfie has hydrocephalus – a build-up of fluid in the brain – and has had five surgeries. The father-of-three explained that his family’s experience with Alfie provided the impetus for him wanting to donate his kidney. “If Sammy could be made as well as she could be and some of the stress on the family could be alleviated that for me was a big thing,” he said. Sammy is doing well after the surgery, but it was not without complications. “She had to be intubated, sedated and temporarily paralysed in order for her lungs to repair themselves, which was terrifying,” said Silverman. But two days later, Sammy’s lungs cleared. “We have gone from almost losing her – at one point they said she was about an hour away from

Twitter ‘ignores’ Jew-hate The group Campaign Against Antisemitism (CAA) has accused Twitter of ignoring hundreds of abusive tweets it had flagged up including calls to “gas the Jews”. The charity also accused Twitter of not moving forward with regular promised meetings after it had raised concerns about the implementation of the company’s policies. The charity said it had been selected by the tech giant as a “Twitter partner” to help tackle antisemitism on its platform after it faced criticism for being slow to remove abusive tweets by British rapper Wiley. Stephen Silverman, CAA’s director of investigations and enforcement, said: “We do not have confidence in Twitter’s capacity to address the rampant antisemitism on its plat-

form. As Twitter’s partner in trying to combat anti-Jewish hate, we have not come to this conclusion lightly.” He added: “Having cut off contact with us after we provided clear evidence Twitter’s policies on hateful material are failing, it is clear the company is neither capable nor interested in tackling antisemitism, and it must now fall to an independent regulator to assume that role.” The CAA submitted 1,000 tweets with antisemitic tropes. On 4 December 2020, it flagged a series of antisemitic tweets it claims Twitter deemed acceptable, including tweets stating: “Except Hitler was right”, “Wow. Biden’s now over 81 million votes? It’s like the Holohoax: you can just keep making up numbers” and

“3 baby Jew rats. 1 will grow up and Rob empires. 1 will go up committing sex act. 1 will grow up and become a Rabbi and will commit Jewish Talmudic Hebaric Terrrorism”. Around 60 percent of the tweets CAA submitted were not found to have breached Twitter’s hate policies. The charity claimed the material in the permitted and banned tweets was often the same. Twitter declined to comment on the CAA allegations but told The Times “all online abuse — including antisemitic abuse — has no place on Twitter [and] is prohibited by our rules”. It added “attempts to deny or diminish” violent events such as the Holocaust are prohibited under its hateful conduct policy.

PRINCE PENS MEMOIR FOREWORD The Prince of Wales has written the foreword for a forthcoming memoir of a 97-year-old Auschwitz survivor. The heir to the throne (pictured)) introduces a book jointly written by Hungary-born Lily Ebert and her great-grandson Dov Forman, 17. The book, Lily’s Promise: How I Survived Auschwitz

Live, will be released and Found the Strength to Live on 2 September and has already received highprofile praise. It has been endorsed by figures including historian Simon Sebag Montefiore, Chief Rabbi Ephraim Mirvis and Paweł Sawicki of the Auschwitz Memorial Museum. Sebag Montefoire called the book “a testimony of irrepressible spirit”, while Piers Morgan said it was “stunningly moving”.

her body giving up – to her being absolutely fine,” she added. The family wants to encourage people to donate their organs to someone they do not know – as there is a big shortage in the UK.

The two-year-old could now have 20 years ahead of her before she needs another kidney. “It has been a very dark two years, but we really pray that with Andy’s amazing gift, her future is brighter,” said Silverman.

www.antiquesbuyers.co.uk FOR APPOINTMENTS CALL SUE ON: