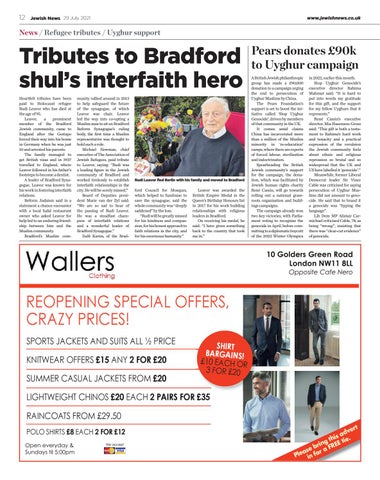 Tributes to Bradford shul’s interfaith hero Heartfelt tributes have been paid to Holocaust refugee Rudi Leavor who has died at the age of 95. Leavor, a prominent member of the Bradford Jewish community, came to England after the Gestapo forced their way into his home in Germany when he was just 10 and arrested his parents. The family managed to get British visas and in 1937 travelled to England, where Leavor followed in his father’s footsteps to become a dentist. A leader of Bradford Synagogue, Leavor was known for his work in fostering interfaith relations. Reform Judaism said in a statement a chance encounter with a local halal restaurant owner who asked Leavor for help led to an enduring friendship between him and the Muslim community. Bradford’s Muslim com-

munity rallied around in 2013 to help safeguard the future of the synagogue, of which Leavor was chair. Leavor led the way into co-opting a Muslim man to sit on Bradford Reform Synagogue’s ruling body, the first time a Muslim representative was thought to hold such a role. Michael Newman, chief executive of The Association of Jewish Refugees, paid tribute to Leavor, saying: “Rudi was a leading figure in the Jewish community of Bradford and worked tirelessly to establish interfaith relationships in the city. He will be sorely missed.” Board of Deputies president Marie van der Zyl said: “We are so sad to hear of the passing of Rudi Leavor. He was a steadfast champion of interfaith relations and a wonderful leader of Bradford Synagogue.” Zulfi Karim, of the Brad-

Rudi Leavor fled Berlin with his family and moved to Bradford

ford Council for Mosques, which helped to fundraise to save the synagogue, said the whole community was “deeply saddened” by the loss. “Rudi will be greatly missed for his kindness and compassion, for his honest approach to faith relations in the city, and for his enormous humanity.”

Leavor was awarded the British Empire Medal in the Queen’s Birthday Honours list in 2017 for his work building relationships with religious leaders in Bradford. On receiving his medal, he said: “I have given something back to the country that took me in.”

Pears donates £90k to Uyghur campaign A British Jewish philanthropic group has made a £90,000 donation to a campaign urging the end to persecution of Uyghur Muslims by China. The Pears Foundation’s support is set to boost the initiative called ‘Stop Uyghur Genocide’, driven by members of that community in the UK. It comes amid claims China has incarcerated more than a million of the Muslim minority in ‘re-education’ camps, where there are reports of forced labour, sterilisation and indoctrination. Spearheading the British Jewish community’s support for the campaign, the donation, which was facilitated by Jewish human rights charity René Cassin, will go towards rolling out a national grassroots organisation and buildings campaigns. The campaign already won two key victories, with Parliament voting to recognise the genocide in April, before committing to a diplomatic boycott of the 2022 Winter Olympics

in 2022, earlier this month. Stop Uyghur Genocide’s executive director Rahima Mahmut said: “It is hard to put into words my gratitude for this gift, and the support for my fellow Uyghurs that it represents.” René Cassin’s executive director, Mia Hasenson-Gross said: “This gift is both a testament to Rahima’s hard work and tenacity and a practical expression of the revulsion the Jewish community feels about ethnic and religious repression so brutal and so widespread that the UK and US have labelled it ‘genocide’.” Meanwhile, former Liberal Democrat leader Sir Vince Cable was criticised for saying persecution of Uyghur Muslims did not amount to genocide. He said that to brand it a genocide was “hyping the language”. Lib Dem MP Alistair Carmichael criticised Cable, 78, as being “wrong”, insisting that there was “clear-cut evidence” of genocide.