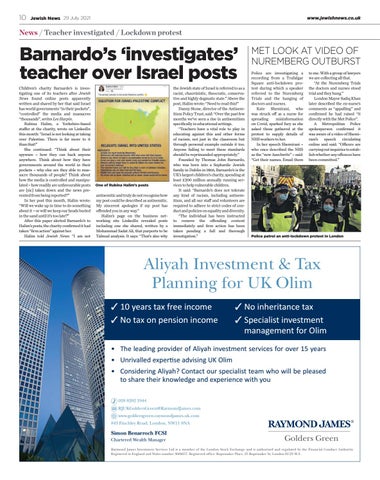 Barnardo’s ‘investigates’ teacher over Israel posts Children’s charity Barnardo’s is investigating one of its teachers after Jewish News found online posts apparently written and shared by her that said Israel has world governments “in their pockets”, “controlled” the media and massacres “thousands”, writes Lee Harpin. Rubina Halim, a Yorkshire-based staffer at the charity, wrote on LinkedIn this month: “Israel is not looking at taking over Palestine. There is far more to it than that!” She continued: “Think about their spyware – how they can hack anyone anywhere. Think about how they have governments around the world in their pockets – why else are they able to massacre thousands of people? Think about how the media is controlled and manipulated – how readily are unfavourable posts are [sic] taken down and the news prevented from being reported?” In her post this month, Halim wrote: “Will we wake up in time to do something about it – or will we keep our heads buried in the sand until it’s too late?” After this paper alerted Barnardo’s to Halim’s posts, the charity confirmed it had taken “firm action” against her. Halim told Jewish News: “I am not

One of Rubina Halim’s posts

antisemitic and truly do not recognise how my post could be described as antisemitic. My sincerest apologies if my post has offended you in any way.” Halim’s page on the business networking site LinkedIn revealed posts including one she shared, written by a Mohammad Sadat Ali, that purports to be Talmud analysis. It says: “That’s also why

the Jewish state of Israel is referred to as a racist, chauvinistic, theocratic, conservative and highly dogmatic state.” Above the post, Halim wrote: “Need to read this!” Danny Stone, director of the Antisemitism Policy Trust, said: “Over the past few months we’ve seen a rise in antisemitism specifically in educational settings. “Teachers have a vital role to play in educating against this and other forms of racism, not just in the classroom but through personal example outside it too. Anyone failing to meet these standards should be reprimanded appropriately.” Founded by Thomas John Barnardo, who was born into a Sephardic Jewish family in Dublin in 1866, Barnardo’s is the UK’s largest children’s charity, spending at least £200 million annually running services to help vulnerable children. It said: “Barnardo’s does not tolerate any kind of racism, including antisemitism, and all our staff and volunteers are required to adhere to strict codes of conduct and policies on equality and diversity. “The individual has been instructed to remove the offending content immediately and firm action has been taken pending a full and thorough investigation.”

MET LOOK AT VIDEO OF NUREMBERG OUTBURST Police are investigating a recording from a Trafalgar Square anti-lockdown protest during which a speaker referred to the Nuremberg Trials and the hanging of doctors and nurses. Kate Shemirani, who was struck off as a nurse for spreading misinformation on Covid, sparked fury as she asked those gathered at the protest to supply details of NHS workers to her. In her speech Shemirani – who once described the NHS as the “new Auschwitz” – said: “Get their names. Email them

to me. With a group of lawyers we are collecting all that. “At the Nuremberg Trials the doctors and nurses stood trial and they hung.” London Mayor Sadiq Khan later described the ex-nurse’s comments as “appalling” and confirmed he had raised “it directly with the Met Police”. A Metropolitan Police spokesperson confirmed it was aware of a video of Shemirani’s speech circulating online and said: “Officers are carrying out inquiries to establish whether any offences have been committed.”

• The leading provider of Aliyah investment services for over 15 years • Unrivalled expertise advising UK Olim • Considering Aliyah? Contact our specialist team who will be pleased to share their knowledge and experience with you 020 8202 1944 RJUKGoldersGreen@RaymondJames.com www.goldersgreen.raymondjames.uk.com 843 Finchley Road, London, NW11 8NA