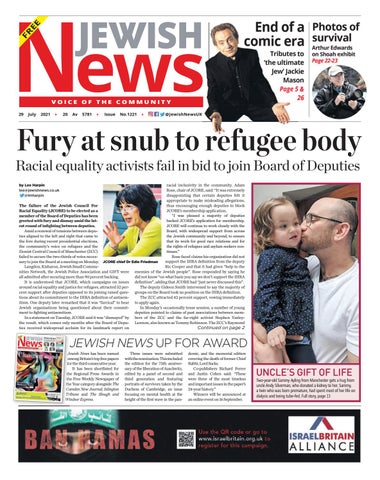 VOICE OF THE COMMUNITY 29

Fury at snub to refugee body

Racial equality activists fail in bid to join Board of Deputies racial inclusivity in the community. Adam Rose, chair of JCORE, said: “It was extremely disappointing that certain deputies felt it appropriate to make misleading allegations, thus encouraging enough deputies to block The failure of the Jewish Council For JCORE’s membership application. Racial Equality (JCORE) to be elected as a “I was pleased a majority of deputies member of the Board of Deputies has been backed JCORE’s application for membership. greeted with fury and dismay amid the latJCORE will continue to work closely with the est round of infighting between deputies. Board, with widespread support from across Amid a renewal of tensions between deputhe Jewish community and beyond, to ensure ties aligned to the left and right that came to that its work for good race relations and for the fore during recent presidential elections, the rights of refugees and asylum seekers conthe community’s voice on refugees and the tinues.” Zionist Central Council of Manchester (ZCC) Rose faced claims his organisation did not failed to secure the two-thirds of votes necessupport the IHRA definition from the deputy sary to join the Board at a meeting on Monday. JCORE chief Dr Edie Friedman Ric Cooper and that it had given “help to the Langdon, Kisharon, Jewish Small Communities Network, the Jewish Police Association and GIFT were enemies of the Jewish people”. Rose responded by saying he did not know “on what basis you say we don’t support the IHRA all admitted after securing more than 90 percent backing. It is understood that JCORE, which campaigns on issues definition”, adding that JCORE had “just never discussed this”. The deputy Gideon Smith intervened to say the majority of around racial equality and justice for refugees, attracted 52 percent support after deputies opposed to its joining raised ques- groups on the Board took no position on the IHRA definition. The ZCC attracted 42 percent support, vowing immediately tions about its commitment to the IHRA definition of antisemitism. One deputy later remarked that it was “farcical” to hear to apply again. In Monday’s occasionally tense session, a number of young Jewish organisations being questioned about their commitdeputies pointed to claims of past associations between memment to fighting antisemitism. In a statement on Tuesday, JCORE said it was “dismayed” by bers of the ZCC and the far-right activist Stephen Yaxleythe result, which comes only months after the Board of Depu- Lennon, also known as Tommy Robinson. The ZCC’s Raymond ties received widespread acclaim for its landmark report on Continued on page 2 by Lee Harpin lee@jewishnews.co.uk @lmharpin

JEWISH NEWS UP FOR AWARD Jewish News has been named among Britain’s top free papers for the third consecutive year. It has been shortlisted for the Regional Press Awards in the Free Weekly Newspaper of the Year category alongside The Camden New Journal, Islington Tribune and The Slough and Windsor Express.

Three issues were submitted with the nomination. This included the edition for the 75th anniversary of the liberation of Auschwitz, edited by a panel of second and third generation and featuring portraits of survivors taken by the Duchess of Cambridge, an issue focusing on mental health at the height of the first wave in the pan-

demic, and the memorial edition covering the death of former Chief Rabbi, Lord Sacks. Co-publishers Richard Ferrer and Justin Cohen said: “These were three of the most timeless and important issues in the paper’s 24-year history.” Winners will be announced at an online event on 16 September.

Two-year-old Sammy Ayling from Manchester gets a hug from uncle Andy Silverman, who donated a kidney to her. Sammy, a twin who was born premature, had spent most of her life on dialysis and being tube-fed. Full story, page 13