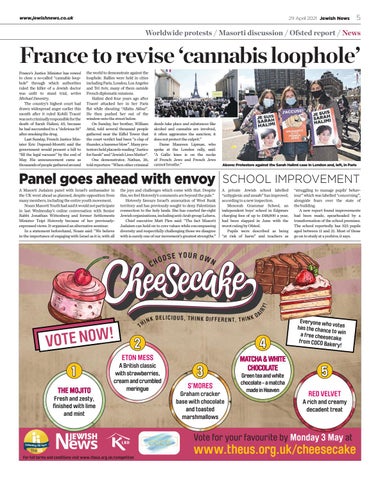 France to revise ‘cannabis loophole’ France’s Justice Minister has vowed to close a so-called “cannabis loophole” through which authorities ruled the killer of a Jewish doctor was unfit to stand trial, writes Michael Daventry. The country’s highest court had drawn widespread anger earlier this month after it ruled Kobili Traoré was not criminally responsible for the death of Sarah Halimi, 65, because he had succumbed to a “delirious fit” after smoking the drug. Last Sunday, French Justice Minister Eric Dupond-Moretti said the government would present a bill to “fill the legal vacuum” by the end of May. His announcement came as thousands of people gathered around

the world to demonstrate against the loophole. Rallies were held in cities including Paris, London, Los Angeles and Tel Aviv, many of them outside French diplomatic missions. Halimi died four years ago after Traoré attacked her in her Paris flat while shouting “Allahu Akbar”. He then pushed her out of the window onto the street below. On Sunday, her brother, William Attal, told several thousand people gathered near the Eiffel Tower that the court verdict had been “a clap of thunder, a hammer blow”. Many protestors held placards reading “Justice for Sarah” and “Jewish Lives Matter”. One demonstrator, Nathan, 26, told reporters: “When other criminal

deeds take place and substances like alcohol and cannabis are involved, it often aggravates the sanction; it does not protect the culprit.” Dame Maureen Lipman, who spoke at the London rally, said: “A Gallic knee is on the necks of French Jews and French Jews cannot breathe.”

Panel goes ahead with envoy A Masorti Judaism panel with Israel’s ambassador in the UK went ahead as planned, despite opposition from many members, including the entire youth movement. Noam Masorti Youth had said it would not participate in last Wednesday’s online conversation with Senior Rabbi Jonathan Wittenberg and former Settlements Minister Tzipi Hotovely because of her previouslyexpressed views. It organised an alternative seminar. In a statement beforehand, Noam said: “We believe in the importance of engaging with Israel as it is, with all

the joys and challenges which come with that. Despite this, we feel Hotovely’s comments are beyond the pale.” Hotovely favours Israel’s annexation of West Bank territory and has previously sought to deny Palestinian connection to the holy lands. She has courted far-right Jewish organisations, including anti-Arab group Lehava. Chief executive Matt Plen said: “The fact Masorti Judaism can hold on to core values while encompassing diversity and respectfully challenging those we disagree with is surely one of our movement’s greatest strengths.”

SCHOOL IMPROVEMENT A private Jewish school labelled “unhygienic and unsafe” has improved, according to a new inspection. Menorah Grammar School, an independent boys’ school in Edgware charging fees of up to £48,000 a year, had been slapped in June with the worst rating by Ofsted. Pupils were described as being “at risk of harm” and teachers as

“struggling to manage pupils’ behaviour” which was labelled “concerning”, alongside fears over the state of the building. A new report found improvements had been made, spearheaded by a transformation of the school premises. The school reportedly has 325 pupils aged between 11 and 21. Most of those go on to study at a yeshiva, it says.

Above: Protestors against the Sarah Halimi case in London and, left, in Paris

A British classic with strawberries, cream and crumbled meringue

Fresh and zesty, finished with lime and mint t

3 S’MORES Graham cracker base with chocolate and toasted marshmallows

Green tea and white chocolate - a matcha made in Heaven

Everyone wh o votes has the chan ce to a free cheese win ca from COCO Ba ke kery!