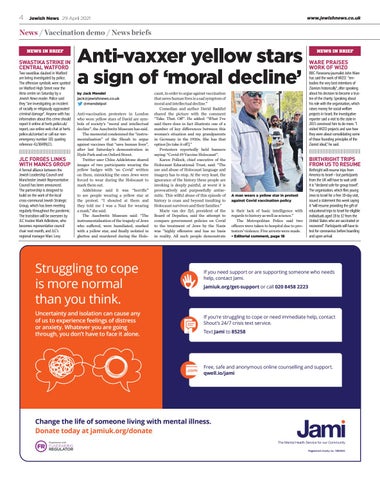 SWASTIKA STRIKE IN CENTRAL WATFORD Two swastikas daubed in Watford are being investigated by police. The offensive symbols were spotted on Watford High Street near the Atria centre on Saturday by a Jewish News reader. Police said they “are investigating an incident of racially or religiously aggravated criminal damage”. Anyone with has information about this crime should report it online at herts.police.uk/ report, use online web chat at herts. police.uk/contact or call our nonemergency number 101 quoting reference 41/30499/21.

JLC FORGES LINKS WITH MANCS GROUP A formal alliance between the Jewish Leadership Council and Manchester Jewish Representative Council has been announced. The partnership is designed to build on the work of the local cross-communal Jewish Strategic Group, which has been meeting regularly throughout the pandemic. The transition will be overseen by JLC trustee Mark Adlestone, who becomes representative council chair next month, and JLC’s regional manager Marc Levy.

Anti-vaccination protesters in London who wore yellow stars of David are symbols of society’s “moral and intellectual decline”, the Auschwitz Museum has said. The memorial condemned the “instrumentalisation” of the Shoah to argue against vaccines that “save human lives”, after last Saturday’s demonstration in Hyde Park and on Oxford Street. Twitter user Chloe Addelstone shared images of two participants wearing the yellow badges with ‘no Covid’ written on them, mimicking the ones Jews were forced to wear during the Holocaust to mark them out. Addelstone said it was “horrific” to see people wearing a yellow star at the protest. “I shouted at them and they told me I was a Nazi for wearing a mask,” she said. The Auschwitz Museum said: “The instrumentalisation of the tragedy of Jews who suffered, were humiliated, marked with a yellow star, and finally isolated in ghettos and murdered during the Holo-

Struggling to cope is more normal than you think. Uncertainty and isolation can cause any of us to experience feelings of distress or anxiety. Whatever you are going through, you don’t have to face it alone.

caust, in order to argue against vaccination that saves human lives is a sad symptom of moral and intellectual decline.” Comedian and author David Baddiel shared the picture with the comment “Take. That. Off ”. He added: “What I’ve said there does in fact illustrate one of a number of key differences between this woman’s situation and my grandparents in Germany in the 1930s. She has that option [to take it off ].” Protesters reportedly held banners saying: “Covid-19 Vaccine Holocaust”. Karen Pollock, chief executive of the Holocaust Educational Trust, said: “The use and abuse of Holocaust language and imagery has to stop. At the very least, the ignorance of the history these people are invoking is deeply painful, at worst it is provocatively and purposefully antisemitic. This wilful abuse of this episode of history is crass and beyond insulting to Holocaust survivors and their families.” Marie van der Zyl, president of the Board of Deputies, said the attempt to compare government policies on Covid to the treatment of Jews by the Nazis was “highly offensive and has no basis in reality. All such people demonstrate

WARE PRAISES WORK OF WIZO BBC Panorama journalist John Ware has said the work of WIZO “embodies the very best intentions of Zionism historically”, after speaking about his decision to become a trustee of the charity. Speaking about his role with the organisation, which raises money for social welfare projects in Israel, the investigative reporter said a visit to the state in 2015 convinced him to do more. “I visited WIZO projects and saw how they were about consolidating some of those founding principles of the Zionist ideal,” he said.

BIRTHRIGHT TRIPS FROM US TO RESUME

is their lack of basic intelligence with regards to history as well as science.” The Metropolitan Police said two officers were taken to hospital due to protesters’ violence. Five arrests were made. • Editorial comment, page 18

Birthright will resume trips from America to Israel – but participants from the UK will have to wait until it is “declared safe for group travel”. The organisation, which flies young Jews to Israel for a free 10-day visit, issued a statement this week saying it “will resume providing the gift of educational trips to Israel for eligible individuals aged 18 to 32 from the United States who are vaccinated or recovered”. Participants will have to test for coronavirus before boarding and upon arrival.

If you need support or are supporting someone who needs help, contact Jami. jamiuk.org/get-support or call 020 8458 2223

Change the life of someone living with mental illness. Donate today at jamiuk.org/donate Registered charity no. 1003345