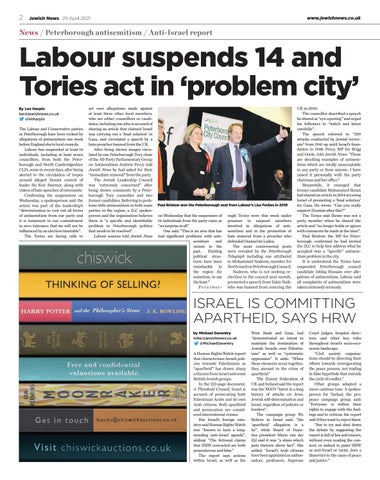 The Labour and Conservative parties in Peterborough have been rocked by allegations of antisemitism one week before England elects local councils. Labour has suspended at least 14 individuals, including at least seven councillors, from both the Peterborough and North Cambridgeshire CLPs, some in recent days, after being alerted to the circulation of tropes around alleged Zionist control of leader Sir Keir Starmer, along with videos of hate speeches of extremists. Confirming the suspensions on Wednesday, a spokesperson said the action was part of the leadership’s “determination to root out all forms of antisemitism from our party and it is testament to our commitment to zero tolerance that we will not be influenced by an election timetable”. The Tories are facing calls to

act over allegations made against at least three other local members, who are either councillors or candidates, including one who is accused of sharing an article that claimed Israel was carrying out a ‘final solution’ in Gaza, and circulated a speech by a hate preacher banned from the UK. After being shown images circulated by one Peterborough Tory, chair of the All-Party Parliamentary Group on Antisemitism Andrew Percy told Jewish News he had asked for their “immediate removal” from the party. The Jewish Leadership Council was “extremely concerned” after being shown comments by a Peterborough Tory councillor and two former candidates. Referring to problems with antisemitism in both main parties in the region, a JLC spokesperson said the organisation believes there is “a specific and identifiable problem in Peterborough politics that needs to be resolved”. Labour sources told Jewish News

on Wednesday that the suspension of 14 individuals from the party came as “no surprise at all”. One said: “This is an area that has had significant problems with antisemitism and racism in the past. Existing political structures have been ramshackle in the region for sometime, to say the least.” Peterbor-

ough Tories were this week under pressure to suspend members involved in allegations of antisemitism and in the promotion of hate material from a preacher who defended Osama bin Laden. The most controversial posts were revealed by the Peterborough Telegraph including one attributed to Mohammed Nadeem, member for North ward on Peterborough Council. Nadeem, who is not seeking reelection to the council next month, promoted a speech from Zakir Naik, who was banned from entering the

UK in 2010. The councillor described a speech he shared as “eye-opening” and urged his followers to “watch and listen carefully”. The speech referred to “259 attacks conducted by Jewish terrorists” from 1941 up until Israel’s foundation in 1948. Percy, MP for Brigg and Goole, told Jewish News: “These are shocking examples of antisemitism which are totally unacceptable in any party or from anyone. I have raised it personally with the party chairman and her office.” Meanwhile, it emerged that former candidate Muhammed Ikram had shared an article in 2014 accusing Israel of promoting a ‘final solution’ for Gaza. He wrote: “Can you really support Zionism after this?” The Tories said Ikram was not a party member when he shared the article and “no longer holds or agrees with comments he made at the time”. Paul Bristow, the MP for Peterborough, confirmed he had invited the JLC to help him address what he accepted was a “specific” antisemitism problem in the city. It is understood the Tories have suspended Peterborough council candidate Ishfaq Hussain over allegations of antisemitism. Labour said all complaints of antisemitism were taken extremely seriously.

A Human Rights Watch report that characterises Israeli policies towards Palestinians as “apartheid” has drawn sharp criticism from Israel and some British Jewish groups. In the 213-page document, A Threshold Crossed, Israel is accused of persecuting both Palestinian Arabs and its own Arab citizens. Both apartheid and persecution are considered international crimes. But Israel’s foreign ministry said Human Rights Watch was “known to have a longstanding anti-Israel agenda”, adding: “The fictional claims that HRW concocted are both preposterous and false.” The report says actions within Israel, as well as the

West Bank and Gaza, had “demonstrated an intent to maintain the domination of Jewish Israelis over Palestinians” as well as “systematic oppression”. It adds: “When these elements occur together, they amount to the crime of apartheid.” The Zionist Federation of UK and Ireland said the report was the NGO’s “latest in a long history of attacks on Jews, Jewish self-determination and Israel, regardless of policies or borders”. The campaign group We Believe in Israel said: “the ‘apartheid’ allegation is a lie”, while Board of Deputies president Marie van der Zyl said it was “a sham which puts rhetoric above fact”. She added: “Israel’s Arab citizens have been appointed as ambassadors, professors, Supreme

Court judges, hospital directors, and other key roles throughout Israel’s socio-economic landscape. “Civil society organisations should be directing their efforts towards reinvigorating the peace process, not trading in false hyperbole that extends the cycle of conflict.” Other groups adopted a more cautious tone. A spokesperson for Yachad, the propeace campaign group, said: “Everyone is within their rights to engage with the findings and to criticise the report and if they want to, reject them. “But to try and shut down the debate by suggesting the report is full of lies and smears, without even reading the content, or indeed to paint HRW as anti-Israel or racist, does a disservice to the cause of peace and justice.”