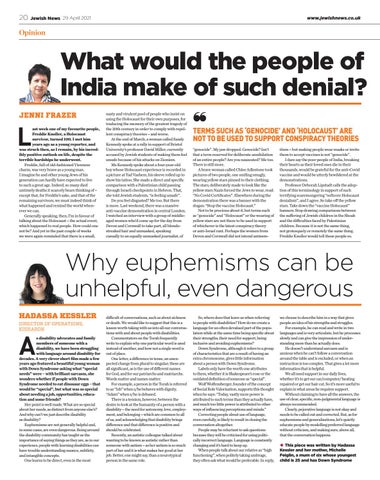 What would the people of India make of such denial? JENNI FRAZER

ast week one of my favourite people, Freddie Knoller, a Holocaust survivor, turned 100. I met him years ago as a young reporter, and was struck then, as I remain, by his incredibly positive outlook on life, despite the terrible hardships he underwent. Freddie, full of old-fashioned Viennese charm, was very brave as a young man. I imagine he and other young Jews of his generation can hardly have expected to live to such a great age. Indeed, so many died untimely deaths it scarcely bears thinking of – except that, for Freddie’s sake, and that of the remaining survivors, we must indeed think of what happened and remind the world whenever we can. Generally speaking, then, I’m in favour of talking about the Holocaust – the actual event, which happened to real people. How could one not be? And yet in the past couple of weeks we were again reminded that there is a small,

nasty and virulent pool of people who insist on using the Holocaust for their own purposes, for traducing the memory of the greatest tragedy of the 20th century in order to comply with repellent conspiracy theories – and worse. At the end of March, a woman called Sandy Kennedy spoke at a rally in support of Bristol University’s professor David Miller, currently accused by Jewish students of making them feel unsafe because of his attacks on Zionism. Ms Kennedy spoke about a four-year-old boy whose Holocaust experience is recorded in a picture at Yad Vashem, his sleeve rolled up to show his tattoo. She made a direct and specific comparison with a Palestinian child passing through Israeli checkpoints in Hebron. That, she told Jewish students, “is feeling unsafe”. Do you feel disgusted? Me too. But there is more. Last weekend, there was a massive anti-vaccine demonstration in central London. I watched an interview with a group of middleaged women who’d come up for the day from Devon and Cornwall to take part, all blondestreaked hair and unmasked, speaking casually to an equally unmasked journalist, of

“genocide”. My jaw dropped. Genocide? Isn’t that a term reserved for deliberate annihilation of an entire people? Are you nauseated? Me too. There is still more. A brave woman called Chloe Adlestone took pictures of two people, one smiling smugly, wearing yellow stars pinned to their clothing. The stars, deliberately made to look like the yellow stars Nazis forced the Jews to wear, read: “No Covid Certificates”. Elsewhere during the demonstration there was a banner with the slogan: “Stop the vaccine Holocaust.” Not to be precious about it, but terms such as “genocide” and “Holocaust” or the wearing of yellow stars are not there to be used in support of whichever is the latest conspiracy theory or anti-Israel rant. Perhaps the women from Devon and Cornwall did not intend antisem-

itism – but making people wear masks or invite them to accept vaccines is not “genocide”. I dare say the poor people of India, breaking their hearts as their loved ones die in their thousands, would be grateful for the anti-Covid vaccine and would be utterly bewildered at the demonstrations. Professor Deborah Lipstadt calls the adoption of this terminology in support of such terrifying scaremongering “softcore Holocaust denialism”, and I agree. So take off the yellow stars. Take down the “vaccine Holocaust” banners. Stop drawing comparisons between the suffering of Jewish children in the Shoah and the difficulties faced by Palestinian children. Because it is not the same thing, not grotesquely or remotely the same thing. Freddie Knoller would tell these people so.

Why euphemisms can be unhelpful, even dangerous HADASSA KESSLER DIRECTOR OF OPERATIONS, KISHARON

s disability advocates and family members of someone with a disability, we have been struggling with language around disability for decades. A very clever short film made a few years ago featured a beautiful young woman with Down Syndrome asking what “special needs” were – with brilliant sarcasm, she wonders whether if people with Down Syndrome needed to eat dinosaur eggs – that would be “special”, but what was so special about needing a job, opportunities, education and some friends? Her point is well made. What are so special about her needs, as distinct from anyone else’s? And why can’t we just describe disability as disability? Euphemisms are not generally helpful and, in some cases, are even dangerous. Being around the disability community has taught us the importance of saying things as they are, as in our experience, people with learning disabilities can have trouble understanding nuance, subtlety, and intangible concepts. One learns to be direct, even in the most

difficult of conversations, such as about sickness or death. We would like to suggest that this is a lesson worth taking with us into all our conversations with and about people with disabilities. Commentators on the Torah frequently write to explain why one particular word is used instead of another, and how not a single word is out of place. One letter, a difference in tense, an unexpected change from plural to singular; these are all significant, as is the use of different names for God, and for our patriarchs and matriarchs. Words matter and names matter. For example, a person in the Torah is referred to as “Ish” when s/he behaves with dignity, “Adam” when s/he is debased. There is a tension, however, between the desire to look at the humanity of a person with a disability – the need for autonomy, love, employment, and belonging – which are common to all of us, and acknowledging that disability brings difference and that difference is positive and should be celebrated. Recently, an autistic colleague talked about wanting to be known as autistic rather than someone with autism – as her autism is so much part of her and it is what makes her good at her job. Better, one might say, than a neurotypical person in the same role.

So, where does that leave us when referring to people with disabilities? How do we create a language for an often devalued part of the population while at the same time being specific about their strengths, their need for support, being inclusive and avoiding euphemisms? Down Syndrome, although it refers to a group of characteristics that are a result of having an extra chromosome, gives little information about a person with Down Syndrome. Labels only have the worth one attributes to them, whether it is Shakespeare’s rose or the outdated definition of someone as “special”. Wolf Wolfensberger, founder of the concept of Social Role Valorisation, supports this thought when he says: “Today, vastly more power is attributed to such terms than they actually have, and much too little power is attributed to other ways of influencing perceptions and minds.” Correcting people about use of language, even carefully, is likely to result in closing the conversation altogether. People may be reluctant to ask questions because they will be criticised for using politically incorrect language. Language is constantly changing and it’s hard to keep up. When people talk about our relative as “high functioning”, when politely taking umbrage, they often ask what would be preferable. In reply,

we choose to describe him in a way that gives people an idea of his strengths and struggles. For example, he can read and write in two languages and is very articulate, but he processes slowly and can give the impression of understanding more than he actually does. He doesn’t understand sarcasm and is anxious when he can’t follow a conversation around the table and is excluded, or when an instruction is too complex. That gives a lot more information that is helpful. We all need support in our daily lives, whether it’s to get our car/computer/ heating repaired or get our hair cut. So it’s more useful to explain in what areas he requires support. Without claiming to have all the answers, the use of clear, specific, non-judgmental language is always recommended. Clearly, pejorative language is not okay and needs to be called out and corrected. But, as for euphemisms and generalisations, let’s quietly educate people by modelling preferred language without criticism, and making sure, above all, that the conversation happens.  This piece was written by Hadassa Kessler and her mother, Michelle Feiglin, a mum of six whose youngest child is 25 and has Down Syndrome