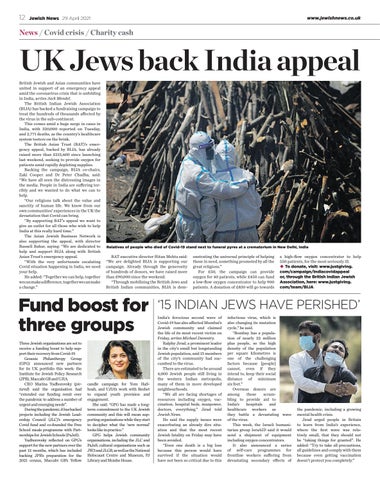 UK Jews back India appeal British Jewish and Asian communities have united in support of an emergency appeal amid the coronavirus crisis that is unfolding in India, writes Jack Mendel. The British Indian Jewish Association (BIJA) has backed a fundraising campaign to treat the hundreds of thousands affected by the virus in the sub-continent. This comes amid a huge surge in cases in India, with 320,000 reported on Tuesday, and 2,771 deaths, as the country’s healthcare system teeters on the brink. The British Asian Trust (BAT)’s emergency appeal, backed by BIJA, has already raised more than £215,600 since launching last weekend, seeking to provide oxygen for patients amid rapidly depleting supplies. Backing the campaign, BIJA co-chairs, Zaki Cooper and Dr Peter Chadha, said: “We have all seen the distressing images in the media. People in India are suffering terribly and we wanted to do what we can to help. “Our religions talk about the value and sanctity of human life. We know from our own communities’ experiences in the UK the devastation that Covid can bring. “By supporting BAT’s appeal we want to give an outlet for all those who wish to help India at this really hard time.” The Asian Jewish Business Network is also supporting the appeal, with director Russell Bahar, saying: “We are dedicated to help and support BIJA along with British Asian Trust’s emergency appeal. “With the very unfortunate escalating Covid situation happening in India, we need your help. He added: “Together we can help, together we can make a difference, together we can make a change.”

Relatives of people who died of Covid-19 stand next to funeral pyres at a crematorium in New Delhi, India

BAT executive director Hitan Mehta said: “We are delighted BIJA is supporting our campaign. Already through the generosity of hundreds of donors, we have raised more than £90,000 since the weekend. “Through mobilising the British Jews and British Indian communities, BIJA is dem-

Fund boost for three groups Three Jewish organisations are set to receive a funding boost to help support their recovery from Covid-19. Genesis Philanthropy Group (GPG) announced new partners for its UK portfolio this week: the Institute for Jewish Policy Research (JPR), Maccabi GB and UJIA. CEO Marina Yudborovsky (pictured) said the organisation had “extended our funding remit over the pandemic to address a number of urgent and emerging needs”. During the pandemic, it has backed projects including the Jewish Leadership Council (JLC)’s emergency Covid fund and co-founded the Free School meals programme with Partnerships for Jewish Schools (PaJeS). Yudborovsky reflected on GPG’s support for the new partners over the past 12 months, which has included backing JPR’s preparation for the 2021 census, Maccabi GB’s Yellow

candle campaign for Yom HaShoah, and UJIA’s work with Reshet to expand youth provision and engagement. She said: “GPG has made a longterm commitment to the UK Jewish community and this will mean supporting organisations while they start to decipher what the ‘new normal’ looks like in practice.” GPG helps Jewish community organisations, including the JLC and PaJeS, cultural organisations such as JW3 and JLGB, as well as the National Holocaust Centre and Museum, PJ Library and Moishe House.

onstrating the universal principle of helping those in need, something promoted by all the great religions.” For £50, the campaign can provide oxygen for 40 patients, while £450 can fund a low-flow oxygen concentrator to help 900 patients. A donation of £830 will go towards

‘15 INDIAN JEWS HAVE PERISHED’ India’s ferocious second wave of Covid-19 has also affected Mumbai’s Jewish community and claimed the life of its most recent victim on Friday, writes Michael Daventry. Ralphy Jirad, a prominent leader in the city’s small but longstanding Jewish population, said 15 members of the city’s community had succumbed to the virus. There are estimated to be around 4,000 Jewish people still living in the western Indian metropolis, many of them in more developed neighbourhoods. “We all are facing shortages of resources including oxygen, vaccination, hospital beds, manpower, doctors, everything,” Jirad told Jewish News. He said the supply issues were exacerbating an already dire situation and that the most recent Jewish fatality on Friday may have been avoided. “Even one death is a big loss because this person would have survived if the situation would have not been so critical due to this

infectious virus, which is also changing its mutation cycle,” he said. “Bombay has a population of nearly 22 million plus people, so the high density of the population per square kilometres is one of the challenging factors because [people] cannot, even if they intend to, keep their social distance of minimum six feet.” Overseas donors are among those scrambling to provide aid to India’s hospitals and healthcare workers as they battle a devastating wave of the virus. This week, the Israeli humanitarian group IsraAID said it would send a shipment of equipment including oxygen concentrators. It also announced a series of self-care programmes for frontline workers suffering from devastating secondary effects of

the pandemic, including a growing mental health crisis. Jirad urged people in Britain to learn from India’s experience, where the first wave was relatively small, that they should not be “taking things for granted”. He added: “Try to take all precautions, all guidelines and comply with them because even getting vaccination doesn’t protect you completely.”