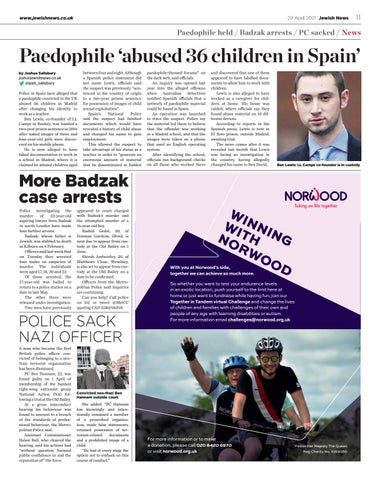 Police in Spain have alleged that a paedophile convicted in the UK abused 36 children in Madrid after changing his identity to work as a teacher. Ben Lewis, co-founder of LL Camps in Bushey, was handed a two-year prison sentence in 2016 after naked images of three and four-year-old girls were discovered on his mobile phone. He is now alleged to have faked documentation to work in a school in Madrid, where it is claimed he abused children aged

between four and eight. Although a Spanish police statement did not name Lewis, officials said the suspect was previously “sentenced in his country of origin to a two-year prison sentence for possession of images of child sexual exploitation”. Spain’s National Police said the suspect had falsified documents which would have revealed a history of child abuse and changed his name to gain employment. This allowed the suspect to take advantage of his status as a teacher in order to “generate an enormous amount of material that he disseminated in hidden

More Badzak case arrests Police investigating the murder of 22-year-old aspiring lawyer Sven Badzak in north London have made four further arrests. Badzak, whose father is Jewish, was stabbed to death in Kilburn on 6 February. Officers said last week that on Tuesday they arrested four males on suspicion of murder. The individuals were aged 17, 18, 20 and 23. Of those arrested, the 17-year-old was bailed to return to a police station on a date in late May. The other three were released under investigation. Two men have previously

POLICE SACK NAZI OFFICER A man who became the first British police officer convicted of belonging to a neoNazi terrorist organisation has been dismissed. PC Ben Hannam, 22, was found guilty on 1 April of membership of the banned right-wing extremist group National Action (NA) following a trial at the Old Bailey. At a gross misconduct hearing his behaviour was found to amount to a breach of the standards of professional behaviour, the Metropolitan Police said. Assistant Commissioner Helen Ball, who chaired the hearing, said his actions had “without question harmed public confidence in and the reputation of” the force.

paedophile-themed forums” on the dark web, said officials. An inquiry was opened last year into the alleged offences when Australian detectives notified Spanish officials that a network of paedophile material could be based in Spain. An operation was launched to trace the suspect. Police say the material led them to believe that the offender was working in a Madrid school, and that the images were taken on a phone that used an English operating system. After identifying the school, officials ran background checks on all those who worked there

and discovered that one of them appeared to have falsified documents to allow him to work with children. Lewis is also alleged to have worked as a caregiver for children at home. His home was raided, where officials say they found abuse material on 10 different devices. According to reports in the Spanish press, Lewis is now in El Soto prison, outside Madrid, awaiting trial. The news comes after it was revealed last month that Lewis was facing an investigation in the country, having allegedly changed his name to Ben David.

With you at Norwood’s side, together we can achieve so much more.

So whether you want to test your endurance levels in an exotic location, push yourself to the limit here at home or just want to fundraise while having fun, join our Together in Tandem virtual Challenge and change the lives of children and families with challenges of their own and people of any age with learning disabilities or autism. For more information email challenges@norwood.org.uk

She added: “PC Hannam has knowingly and intentionally remained a member of a proscribed organisation, made false statements, retained possession of terrorism-related documents and a prohibited image of a child. “He had at every stage the option not to embark on this course of conduct.”