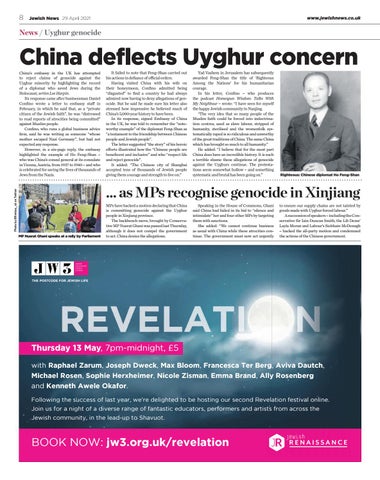 China deflects Uyghur concern China’s embassy in the UK has attempted to reject claims of genocide against the Uyghur minority by highlighting the record of a diplomat who saved Jews during the Holocaust, writes Lee Harpin. Its response came after businessman Daniel Confino wrote a letter to embassy staff in February, in which he said that, as a “private citizen of the Jewish faith”, he was “distressed to read reports of atrocities being committed” against Muslim people. Confino, who runs a global business advice firm, said he was writing as someone “whose mother escaped Nazi Germany”, but had not expected any response. However, in a six-page reply, the embassy highlighted the example of Ho Feng-Shan – who was China’s consul general at its consulate in Vienna, Austria, from 1937 to 1940 – and who is celebrated for saving the lives of thousands of Jews from the Nazis.

It failed to note that Feng-Shan carried out his actions in defiance of official orders. Having visited China with his wife on their honeymoon, Confino admitted being “disgusted” to find a country he had always admired now having to deny allegations of genocide. But he said he made sure his letter also stressed how impressive he believed much of China’s 5,000-year history to have been. In its response, signed Embassy of China in the UK, he was told to remember the “noteworthy example” of the diplomat Feng-Shan as “a testament to the friendship between Chinese people and Jewish people”. The letter suggested “the story” of his heroic efforts illustrated how the “Chinese people are beneficent and inclusive” and who “respect life and reject genocide”. It added: “The Chinese city of Shanghai accepted tens of thousands of Jewish people giving them courage and strength to live on.”

Yad Vashem in Jerusalem has subsequently awarded Feng-Shan the title of ‘Righteous Among the Nations’ for his humanitarian courage. In his letter, Confino – who produces the podcast Homespun Wisdom: Talks With My Neighbour – wrote: “I have seen for myself the happy Jewish community in Nanjing. “The very idea that so many people of the Muslim faith could be forced into indoctrination centres, used as slave labour, stripped of humanity, sterilised and the womenfolk systematically raped is so ridiculous and unworthy of the great traditions of China. The same China which has brought so much to all humanity.” He added: “I believe that for the most part China does have an incredible history. It is such a terrible shame these allegations of genocide against the Uyghurs continue. The protestations seem somewhat hollow – and something systematic and brutal has been going on.”

... as MPs recognise genocide in Xinjiang MP Nusrat Ghani speaks at a rally by Parliament

MPs have backed a motion declaring that China is committing genocide against the Uyghur people in Xinjiang province. The backbench move, brought by Conservative MP Nusrat Ghani was passed last Thursday, although it does not compel the government to act. China denies the allegations.

Speaking in the House of Commons, Ghani said China had failed in its bid to “silence and intimidate” her and four other MPs by targeting them with sanctions. She added: “We cannot continue business as usual with China while these atrocities continue. The government must now act urgently

to ensure our supply chains are not tainted by goods made with Uyghur forced labour.” A succession of speakers – including the Conservative Sir Iain Duncan Smith, the Lib Dems’ Layla Moran and Labour’s Siobhain McDonagh – backed the all-party motion and condemned the actions of the Chinese government.

Thursday 13 May, 7pm-midnight, £5 with Raphael Zarum, Joseph Dweck, Max Bloom, Francesca Ter Berg, Aviva Dautch, Michael Rosen, Sophie Herxheimer, Nicole Zisman, Emma Brand, Ally Rosenberg and Kenneth Awele Okafor. Following the success of last year, we’re delighted to be hosting our second Revelation festival online. Join us for a night of a diverse range of fantastic educators, performers and artists from across the Jewish community, in the lead-up to Shavuot.