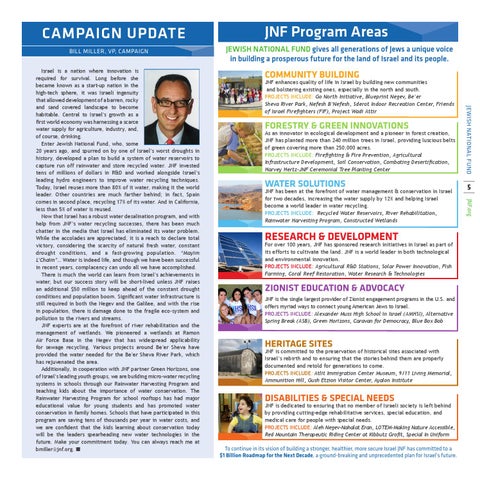 JEWISH NATIONAL FUND gives all generations of Jews a unique voice in building a prosperous future for the land of Israel and its people.

For over 100 years, JNF has sponsored research initiatives in Israel as part of its efforts to cultivate the land. JNF is a world leader in both technological and environmental innovation. PROJECTS INCLUDE: Agricultural R&D Stations, Solar Power Innovation, Fish Farming, Coral Reef Restoration, Water Research & Technologies

JNF is committed to the preservation of historical sites associated with Israel’s rebirth and to ensuring that the stories behind them are properly documented and retold for generations to come. PROJECTS INCLUDE: Atlit Immigration Center Museum, 9/11 Living Memorial, Ammunition Hill, Gush Etzion Visitor Center, Ayalon Institute

To continue in its vision of building a stronger, healthier, more secure Israel JNF has committed to a $1 Billion Roadmap for the Next Decade, a ground-breaking and unprecedented plan for Israel’s future.

JNF has been at the forefront of water management & conservation in Israel for two decades, increasing the water supply by 12% and helping Israel become a world leader in water recycling. PROJECTS INCLUDE: Recycled Water Reservoirs, River Rehabilitation, Rainwater Harvesting Program, Constructed Wetlands

Israel is a nation where innovation is required for survival. Long before she became known as a start-up nation in the high-tech sphere, it was Israeli ingenuity that allowed development of a barren, rocky and sand covered landscape to become habitable. Central to Israel’s growth as a first world economy was harnessing a scarce water supply for agriculture, industry, and, of course, drinking. Enter Jewish National Fund, who, some 20 years ago, and spurred on by one of Israel’s worst droughts in history, developed a plan to build a system of water reservoirs to capture run off rainwater and store recycled water. JNF invested tens of millions of dollars in R&D and worked alongside Israel’s leading hydro engineers to improve water recycling techniques. Today, Israel reuses more than 80% of it water, making it the world leader. Other countries are much farther behind; in fact, Spain comes in second place, recycling 17% of its water. And in California, less than 5% of water is reused. Now that Israel has a robust water desalination program, and with help from JNF’s water recycling successes, there has been much chatter in the media that Israel has eliminated its water problem. While the accolades are appreciated, it is a reach to declare total victory, considering the scarcity of natural fresh water, constant drought conditions, and a fast-growing population. “Mayim L’Chaim”… Water is indeed life, and though we have been successful in recent years, complacency can undo all we have accomplished. There is much the world can learn from Israel’s achievements in water, but our success story will be short-lived unless JNF raises an additional $50 million to keep ahead of the constant drought conditions and population boom. Significant water infrastructure is still required in both the Negev and the Galilee, and with the rise in population, there is damage done to the fragile eco-system and pollution to the rivers and streams. JNF experts are at the forefront of river rehabilitation and the management of wetlands. We pioneered a wetlands at Ramon Air Force Base in the Negev that has widespread applicability for sewage recycling. Various projects around Be’er Sheva have provided the water needed for the Be’er Sheva River Park, which has rejuvenated the area. Additionally, in cooperation with JNF partner Green Horizons, one of Israel’s leading youth groups, we are building micro-water recycling systems in schools through our Rainwater Harvesting Program and teaching kids about the importance of water conservation. The Rainwater Harvesting Program for school rooftops has had major educational value for young students and has promoted water conservation in family homes. Schools that have participated in this program are saving tens of thousands per year in water costs, and we are confident that the kids learning about conservation today will be the leaders spearheading new water technologies in the future. Make your commitment today. You can always reach me at bmiller@jnf.org. n 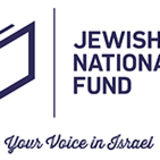