Jews in Space: Members of the Tribe in Orbit 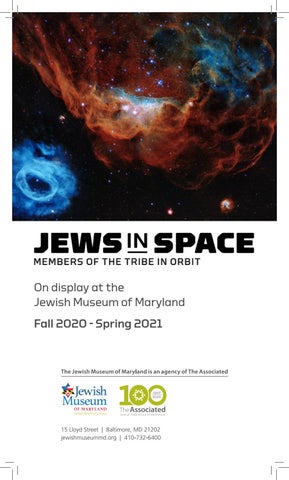 CREDITS Jews in Space: Members of the Tribe in Orbit was made possible in part by The David Berg Foundationsâ&amp;#x20AC;&amp;#x2122; creation and support of The David Berg Rare Book Room and the generous support of Kepco, Inc., and the Kupferberg Foundation and Lisa and Joshua Greer. This exhibit was originally organized by the Center for Jewish History and The YIVO Institute for Jewish Research with American Jewish Historical Society, American Sephardi Federation, and Leo Baeck Institute.

Introduction Jews have always felt the wonder of space. The Jewish calendar marks time with the rising and setting of the sun, and tracks the cycles of the moon, also known as a lunar calendar. From ancient astronomers to today’s space scientists and astronauts, Jewish people have often shown an interest in “looking up.” Outer space has also inspired Jewish artists, writers, comedians, and thinkers, both religious and secular, to boldly imagine worlds beyond our Earth.

ASTRONOMY AND JUDAISM “In my own life, my science and my religion are separate. I’m Jewish, and so religion to me is a kind of moral code and a kind of history. I try to do my science in a moral way, and, I believe that, ideally, science should be looked upon as something that helps us understand our role in the universe.” – Astronomer Vera Rubin, 1996 Throughout history people have turned their gazes upwards to the sky as they work to understand the world around them. Before the modern era, when education was mostly available through religious institutions and scholars, faith and science often went hand-in-hand. Many scientists, particularly those studying the “heavens,” served in religious capacities, including priests, imams, and rabbis. In the Middle Ages, astronomical study also offered a common ground where Christian, Muslim, and Jewish researchers could share their studies without religious antagonism.

Image from the Ma’aseh Toviyah, an encyclopedia of astronomy, theology, medicine and other sciences by Toviyah Katz, 1707. From the Collections of YIVO Institute for Jewish Research.

Historically, the importance of the moon to the Jewish calendar made astronomy (the study of space, stars, and the movement of the skies) especially important to the Jewish community. While science and religion may no longer seem strongly linked, astronomy has remained an important part of Jewish religious practice. Remarkably, even today many of the people pioneering unmanned space exploration, like the Hubble Telescope, come from Jewish heritage.

REFLECTION QUESTION: How do you think our growing knowledge of the universe has changed our view of life here on Earth? Does the vastness of the universe, what scientists know (and don’t know) about it affect your religious beliefs? Why or why not?

JEWS IN SCIENCE FICTION “If there is one thing that I associate with science fiction and Judaism, it’s the belief that human beings have the capacity to survive their mistakes and flourish in a way that would honor our creation” – Rabbi Larry Pinsker quoted in Baltimore Jewish Times, April 3, 2019 Did you know that the term “Science Fiction” was coined by Hugo Gernsback, a Jewish immigrant to the United States from Luxembourg? Gernsback was an inventor and publicist who founded the legendary sci-fi magazine Amazing Stories in 1926. Amazing Stories became the home of the most acclaimed works by the best authors and laid the foundation of a genre that remains popular today. The science fiction genre, both past and present, is full of Jewish authors. One of the most famous (and prolific) is Isaac Asimov, who wrote not just science fiction but also science facts – including The Intelligent Man’s Guide to Science, a National Book Award nominee. Science fiction is all about asking “What If?”, a question Jewish authors have found irresistible.

REFLECTION QUESTION: Many science fiction writers were immigrants or the children of immigrants. How do you think that affected the way they portrayed “aliens” in their work?

JEWS IN SPACE “When you think about your home, you usually think about your house, your neighborhood, and your family, and when you look at this fragile blue ball from outer space, that’s home too. It’s everybody’s home.” – Astronaut Jessica Meir, quoted in Bangor Daily News, April 17, 2019 In 1969 Boris Volynov was the first Jew to travel to space. Judith A. Resnik became the first Jewish American in space in 1984. Jewish astronaut Jessica Meir participated in the first all-women spacewalk in 2019. Since the inception of the American space program, more than a dozen Jewish astronauts have flown to space. Many of these astronauts brought special items into space that helped them connect to their Jewish identity, like Jeffery Hoffman’s dreidel and Jessica Meir’s Hanukkah socks.

During his 1996 mission on the Space Shuttle Columbia, Jeffery A. Hoffman became the first astronaut to read from the Torah in space. Image courtesy of NASA.

REFLECTION QUESTION: What qualities do you share with astronauts (e.g. bravery, curiosity, love of exploration, etc.)? If you were to go to space and could only take a few things with you, what would you take?

MARYLANDERS FEEL THE WONDER OF SPACE “I can trace my love of space to the Shoemaker-Levy Jupiter Impact and the Hubble Space Telescope. It is when I first saw pictures of the impact plumes on Jupiter as seen from Hubble, and then seeing the impact scars directly through the JHU telescope that I knew I wanted to be part of this.” – Astronomer John Debes, Space Telescope Science Institute, 2020 Maryland is home to many important aerospace companies and institutions, from NASA Goddard Space Flight Center in Greenbelt to the Johns Hopkins Applied Physics Laboratory in Laurel to the Space Telescope Science Institute here in Baltimore. Maryland has been a leader in space technology since the mid-20th century, inspiring its residents to look to the stars. Marylanders in the space science fields represent everything from mathematicians to astronomers to technical writers and more!

REFLECTION QUESTION: Have you ever met someone who was involved in exploring space? A teacher? A writer? A technician? An actor? A game designer? The distance to outer space from Baltimore is only about 62 miles, straight up. That’s closer than Wilmington, Delaware! Perhaps your connection to space is a lot closer than you think. JewishMuseumMd.org

UPSTANDERS At JMM, we are committed to inspiring action. Upstanders are people who see something they can improve and take actions to address it. We want our visitors (and ourselves) to become upstanders in our communities. As part of Jews in Space: Members of the Tribe in Orbit, we are collecting books of science fiction, space adventure, cosmic science, and more to donate to the Jewish Volunteer Connection’s Bookworms program. Bookworms is a program where teams of volunteers go to local elementary schools and read to different classes, donate books to expand classroom libraries, and connect with students over the love of a good story. Help inspire a student to explore space by donating a book (or two). To arrange a book drop off, contact Visitors Services Coordinator Talia at 443-873-5164 or tmakowsky@jewishmuseummd.org. We have a few recommendations to get you started:

Asteroid Goldberg: Passover in Outer Space by Brianna Caplan Sayres Chasing Space by Leland Melvin (Young Readers’ Edition) Mae Among the Stars by Roda Ahmed Space Encyclopedia: A Tour of Our Solar System and Beyond by David A. Aguilar

Check out a longer list of recommended books for donation and info on how to become a Bookworms volunteer here: JewsInSpaceExhibit.com

WONDERNAUTS Wondernauts explore the wonders of space. We invite kids of all ages to join us on a journey to face challenges and tasks that ask us to think hard, think creatively, and consult the world around us.

WE HOPE YOU ENJOYED YOUR VISIT TO JEWS IN SPACE: MEMBERS OF THE TRIBE IN ORBIT!

Share your experience with friends and family by sending them a postcard about your visit. Weâ&amp;#x20AC;&amp;#x2122;ve even included a special code to give them a discount on their tickets. Just fold and tear along the perforated lines, add a stamp and an address, and pop the postcard in the mail to invite someone to share in the exciting experience of exploring the wonders of space.

We love mail and want to hear from you! Get creative and design your own sci-fi book cover on the front of this make-your-own postcard, then share with us your favorite part of the exhibit on the back. Fold and tear along the perforated lines, add a stamp, and pop the postcard in the mail. We canâ&amp;#x20AC;&amp;#x2122;t wait to see your designs and to share them on our social media feeds. Watch #JewsInSpace to see your art shared.

Had a great time visiting

And you will too! Hereâ&amp;#x20AC;&amp;#x2122;s a special code to get buy-one-get-one-free tickets to see this special exhibit at the Jewish Museum of Maryland: BOGOSPACEJMM

Tell us your favorite part of

Jews in Space: Members of the Tribe in Orbit

Interpretive brochure created for the Baltimore-run of the Jews in Space exhibit at the Jewish Museum of Maryland. 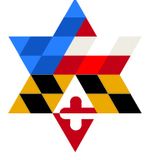