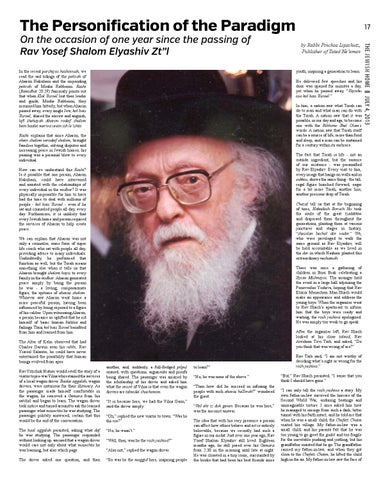 The Personification of the Paradigm youth, inspiring a generation to learn. He delivered few speeches and his door was opened for minutes a day, yet when he passed away, “Vayivku oso kol bais Yisroel.” In him, a nation saw what Torah can do to man and what man can do with the Torah. A nation saw that it was possible, in our day and age, to become one with the Ribbono Shel Olam’s words. A nation saw that Torah itself can be a source of life, more than food and sleep, and a man can be sustained for a century within its embrace.

Rashi explains that since Aharon, the oheiv shalom verodeif shalom, brought families together, solving disputes and increasing peace in Jewish homes, his passing was a personal blow to every individual.

The fact that Torah is life - not an outside ingredient, but the essence of our existence - was personified by Rav Elyashiv. Every visit to him, every image that hangs on walls and in sukkos, shows the same thing - the tall, regal figure hunched forward, eager for a bit more Torah, another line, another precious drop of Torah.

How can we understand this Rashi? Is it possible that one person, Aharon Hakohein, could have intervened and assisted with the relationships of every individual in the midbar? It was physically impossible for him to have had the time to deal with millions of people - kol bais Yisroel - even if he sat and counseled people all day, every day. Furthermore, it is unlikely that every Jewish home and person required the services of Aharon to help create peace.

Chazal tell us that at the beginning of time, Hakadosh Boruch Hu took the souls of the great tzaddikim and dispersed them throughout the generations, planting them at various junctures and stages in history, “shesolan bechol dor vador.” We, who were privileged to walk the same ground as Rav Elyashiv, will be held accountable as we lived in the dor in which Hashem planted this extraordinary neshamah.

We can explain that Aharon was not only a counselor, some form of super life coach who sat with people all day, providing advice to many individuals. Undoubtedly, he performed that function as well, but the Torah means something else when it tells us that Aharon brought shalom bayis to every family in the midbar. Aharon generated peace simply by being the person he was - a loving, compassionate figure, the epitome of ahavas shalom. Whoever saw Aharon went home a more peaceful person, having been influenced by being exposed to a figure of his caliber. Upon witnessing Aharon, a person became so uplifted that he rid himself of basic human foibles and failings. Thus, kol bais Yisroel benefited from him and learned from him.

Rav Yitzchok Hutner would retell the story of a visitor to pre-war Vilna who retained the services of a local wagon driver. Baalei aggalah, wagon drivers, were notorious for their illiteracy. As the passenger made himself comfortable in the wagon, he removed a Gemara from his satchel and began to learn. The wagon driver took notice and turned around to ask the learned passenger what masechta he was studying. The passenger politely answered, certain that this would be the end of the conversation.

There was once a gathering of children in Bnei Brak celebrating a Siyum Mishnayos. The arranger held the event in a large hall adjoining the Ponovezher Yeshiva, hoping that Rav Elozor Menachem Man Shach would make an appearance and address the young boys. When the organizer went to Rav Shach’s apartment to inform him that the boys were ready and waiting, the rosh yeshiva apologized. He was simply too weak to go speak. After the organizer left, Rav Shach looked at his close talmid, Rav Avrohom Tzvi Toib, and asked, “Do you think that was wrong of me?”

another, and, suddenly, a full-fledged pilpul ensued, with questions, arguments and proofs being shared. The passenger was amazed by the scholarship of his driver and asked him what the secret of Vilna is that even the wagon drivers are talmidei chachomim. “It is because here, we had the Vilna Gaon,” said the driver simply. “Oh,” replied the new visitor to town. “Was he the rov?”

The baal aggalah persisted, asking what daf he was studying. The passenger responded without looking up, amused that a wagon driver would care not only about what masechta he was learning, but also which page.

The driver asked one question, and then

“So was he the maggid here, inspiring people

“Well, then, was he the rosh yeshiva?” “Also not,” replied the wagon driver.

to learn?” “No, he was none of the above.” “Then how did he succeed in infusing the people with such ahavas haTorah?” wondered the guest. “Veil ehr iz duh geven. Because he was here,” was the succinct answer. The idea that with his very presence a person can affect how others behave and act is entirely believable, because we recently had such a figure in our midst. Just over one year ago, Rav Yosef Shalom Elyashiv still lived. Eighteen months ago, he still pored over his Gemara from 2:30 in the morning until late at night. He was closeted in a tiny room, surrounded by the books that had been his best friends since

Rav Toib said, “I am not worthy of deciding what’s right or wrong for the rosh yeshiva.” “But,” Rav Shach persisted, “I sense that you think I should have gone.” “I can only tell the rosh yeshiva a story. My own father-in-law survived the horrors of the Second World War, enduring beatings and unimaginable torture. I once asked him how he managed to emerge from such a dark, bitter tunnel with his faith intact, and he told me that when he was a small child, the Chofetz Chaim visited his village. My father-in-law was a small child, and his parents felt that he was too young to go greet the gadol and too fragile for the inevitable pushing and jostling, but his grandfather insisted that he go. The grandfather carried my father-in-law, and when they got close to the Chofetz Chaim, he lifted the child high in the air. My father-in-law saw the face of

In the recent parshiyos hashovuah, we read the sad tidings of the petirah of Aharon Hakohein and the impending petirah of Moshe Rabbeinu. Rashi (Bamidbar 20:29) famously points out that when Klal Yisroel lost their leader and guide, Moshe Rabbeinu, they mourned him bitterly, but when Aharon passed away, every single Jew, kol bais Yisroel, shared the sorrow and anguish, lefi shehayah Aharon rodeif shalom bein baalei meriva uvein ish le’ishto.

The Alter of Kelm observed that had Charles Darwin seen his rebbi, Rav Yisroel Salanter, he could have never entertained the possibility that human beings evolved from apes.