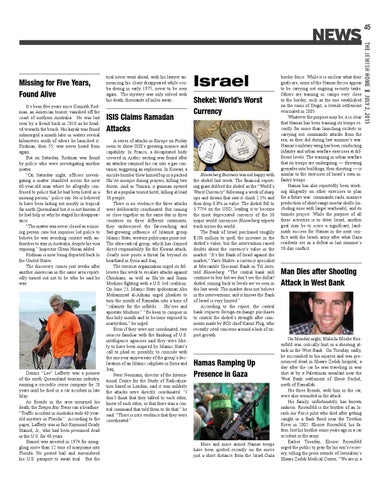 Dennis “Lee” Lafferty was a pioneer of the north Queensland tourism industry, running a crocodile cruise company for 28 years until he died in a car accident in late May. As friends in the area mourned his death, the Tampa Bay Times ran a headline: “Traffic accident in Australia ends 40-yearold mystery in Florida.” According to the paper, Lafferty was in fact Raymond Grady Stansel, Jr., who had been presumed dead in the U.S. for 40 years. Stansel was arrested in 1974 for smuggling more than 12 tons of marijuana into Florida. He posted bail and surrendered his U.S. passport to await trial. But the

ISIS Claims Ramadan Attacks A series of attacks in Europe on Friday seem to show ISIS’s growing menace and capability. In France, a decapitated body covered in Arabic writing was found after an attacker rammed his car into a gas container, triggering an explosion. In Kuwait, a suicide bomber blew himself up in a packed Shi’ite mosque during prayers, killing two dozen. And in Tunisia, a gunman opened fire at a popular tourist hotel, killing at least 38 people. There is no evidence the three attacks were deliberately coordinated. But coming so close together on the same day in three countries on three different continents, they underscored the far-reaching and fast-growing influence of Islamist group Islamic State, western politicians point out. The ultra-radical group, which has claimed direct responsibility for the Kuwait attack, clearly now poses a threat far beyond its heartland in Syria and Iraq. The terrorist organization urged its followers this week to escalate attacks against Christians, as well as Shi’ite and Sunni Muslims fighting with a U.S.-led coalition. On June 23, Islamic State spokesman Abu Muhammad al-Adnani urged jihadists to turn the month of Ramadan into a time of “calamity for the infidels ... Shi’ites and apostate Muslims.” “Be keen to conquer in this holy month and to become exposed to martyrdom,” he urged. Even if they were not coordinated, two sources familiar with the thinking of U.S. intelligence agencies said they were likely to have been inspired by Islamic State’s call to jihad or, possibly, to coincide with the one year anniversary of the group’s declaration of an Islamic caliphate in Syria and Iraq. Peter Neumann, director of the International Centre for the Study of Radicalization based in London, said it was unlikely the attacks were directly coordinated. “I don’t think that they talked to each other, knew of each other, or that there was a central command that told them to do that,” he said. “There is zero evidence that they were coordinated.”

Bloomberg Business was not happy with the shekel last week. The financial reporting giant dubbed the shekel as the “World’s Worst Currency” following a week of sharp ups and downs that saw it climb 2.1% and then drop 0.8% in value. The shekel fell to 3.7754 on the USD, leading it to become the most depreciated currency of the 30 major world currencies Bloomberg experts track across the world. The Bank of Israel purchased roughly $200 million to quell the increase in the shekel’s value, but the intervention raised doubts about the currency’s value in the market. “It’s the Bank of Israel against the market,” Yariv Shalev, a currency specialist at Mercantile Discount Bank in Tel Aviv, told Bloomberg. “The central bank will continue to buy but we don’t see the dollar/ shekel coming back to levels we’ve seen in the last week. The market does not believe in the interventions, and it knows the Bank of Israel is very limited.” According to the report, the central bank requires foreign-exchange purchases to control the shekel’s strength after comments made by BOI chief Karnit Flug, who recently cited concerns around a lack of export growth.

Hamas Ramping Up Presence in Gaza

On Monday night, Malachi Moshe Rosenfeld was critically hurt in a shooting attack in the West Bank. On Tuesday, sadly, he succumbed to his injuries and was pronounced dead in Shaare Zedek hospital, a day after the car he was traveling in was shot at by a Palestinian assailant near the West Bank settlement of Shvut Rachel, north of Ramallah. His three friends, with him in the car, were also wounded in the attack. His family, unfortunately, has known sadness. Rosenfeld is the brother of an Israeli Air Force pilot who died after getting caught in a flash flood near the Tzeelim River in 2002. Eliezer Rosenfeld, his father, lost his brother some years ago in a car accident in the army. Earlier Tuesday, Eliezer Rosenfeld urged the public to pray for his son’s recovery, telling the press outside of Jerusalem’s Shaare Zedek Medical Center, “We are in a

It’s been five years since Kenneth Rodman, an American tourist, vanished off the coast of northern Australia. He was last seen by a friend back in 2010 as he headed towards the beach. His kayak was found submerged a month later in waters several kilometers south of where he launched it. Rodman, then 55, was never heard from again. But on Saturday, Rodman was found by police who were investigating another matter. “On Saturday night, officers investigating a matter stumbled across the now 60-year-old man where he allegedly confessed to police that he had been listed as a missing person,” police say. He is believed to have been hiding out mostly in tropical far north Queensland but it is not known if he had help or why he staged his disappearance. “The matter was never closed as a missing person case but inquiries led police to believe he was avoiding contact with authorities to stay in Australia, despite his visa expiring,” Inspector Glenn Horan added. Rodman is now being deported back to the United States. The discovery comes just weeks after another American in the same area reportedly turned out not to be who he said he was.

border fence. While it is unclear what their goals are, some of the Hamas forces appear to be carrying out ongoing security tasks. Others are training in camps very close to the border, such as the one established on the ruins of Dugit, a Jewish settlement evacuated in 2005. Whatever the purpose may be, it is clear that Hamas has been training its troops recently for more than launching rockets or carrying out commando attacks from the sea, as they did during last summer’s war. Hamas’s military wing has been conducting infantry and urban warfare exercises at different levels. The training in urban warfare that its troops are undergoing — throwing grenades into buildings, then shooting — is similar to the exercises of Israel’s own infantry troops. . Hamas has also reportedly been working diligently on other exercises to plan for a future war: commando raids, massive production of short-range mortar shells (including ones with larger warheads), and its tunnels project. While the purpose of all these activities is to deter Israel, another goal may be to score a significant, landmark success for Hamas in the next conflict with the Israeli army after what Gaza residents see as a defeat in last summer’s 50-day conflict.

trial never went ahead, with his lawyer announcing his client disappeared while scuba diving in early 1975, never to be seen again. The mystery was only solved with his death, thousands of miles away.