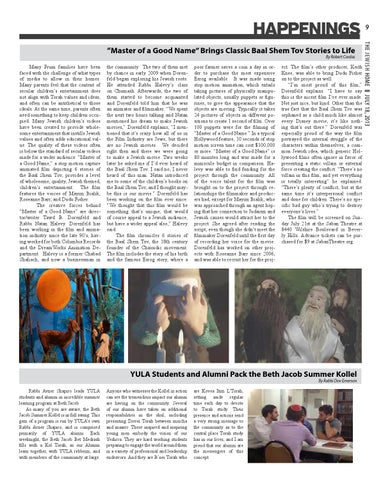 Rabbi Avner Shapiro leads YULA students and alumni in incredible summer learning program at Beth Jacob As many of you are aware, the Beth Jacob Summer Kollel is in full swing. This gem of a program is run by YULA’s own Rabbi Avner Shapiro, and is comprised primarily of YULA alumni. Each weeknight, the Beth Jacob Bet Medrash fills with a Kol Torah, as our Alumni learn together, with YULA rebbeim, and with members of the community at large.

the community. The two of them met by chance in early 2009 when Dorenfeld began exploring his Jewish roots. He attended Rabbi Halevy’s class on Chumash. Afterwards, the two of them started to become acquainted and Dorenfeld told him that he was an animator and filmmaker. “We spent the next two hours talking and Natan mentioned his dream to make Jewish movies,” Dorenfeld explains, “I mentioned that it’s crazy how all of us in the Film Industry are Jews, but there are no Jewish movies. We decided right then and there we were going to make a Jewish movie. Two weeks later he asked me if I’d ever heard of the Baal Shem Tov. I said no, I never heard of this man. Natan introduced me to some of the children’s books on the Baal Shem Tov, and I thought maybe this is our movie.” Dorenfeld has been working on the film ever since. “We thought that this film would be something that’s unique, that would of course appeal to a Jewish audience, but have a wider appeal also,” Halevy said. The film chronicles 6 stories of the Baal Shem Tov, the 18th century founder of the Chassidic movement. The film includes the story of his birth and the famous Esrog story, where a

poor farmer saves a coin a day in order to purchase the most expensive Esrog available. It was made using stop motion animation, which entails taking pictures of physically manipulated objects, usually puppets or figurines, to give the appearance that the objects are moving. Typically it takes 24 pictures of objects in different positions to create 1 second of film. Over 100 puppets were for the filming of “Master of a Good Name.” In a typical Hollywood feature, 10 seconds of stop motion screen time can cost $100,000 or more. “Master of a Good Name” is 80 minutes long and was made for a miniscule budget in comparison. Halevy was able to find funding for the project through the community. All of the voice talent for the film was brought on to the project through relationships the filmmaker and producers had, except for Mayim Bialik, who was approached through an agent hoping that her connection to Judaism and Jewish causes would attract her to the project. She agreed after reading the script, even though she didn’t meet the filmmaker Dorenfeld until the first day of recording her voice for the movie. Dorenfeld has worked on other projects with Roseanne Barr since 2006, and was able to recruit her for the proj-

ect. The film’s other producer, Keith Knee, was able to bring Dudu Fisher on to the project as well. “I’m most proud of this film,” Dorenfeld explains. “I have to say this is the nicest film I’ve ever made. Not just nice, but kind. Other than the true fact that the Baal Shem Tov was orphaned as a child much like almost every Disney movie, it’s like nothing that’s out there.” Dorenfeld was especially proud of the way the film portrayed the internal struggle of the characters within themselves, a common Jewish idea, which generic Hollywood films often ignore in favor of presenting a static villain or external force creating the conflict. “There’s no villain in this film, and yet everything is totally interesting” he explained. “There’s plenty of conflict, but at the same time it’s interpersonal conflict and done for children. There’s no specific bad guy who’s trying to destroy everyone’s lives.” The film will be screened on Sunday July 21st at the Saban Theatre at 8440 Wilshire Boulevard in Beverly Hills. Advance tickets can be purchased for $9 at SabanTheatre.org.

Anyone who witnesses the Kollel in action can see the tremendous impact our alumni are having on the community. Several of our alumni have taken on additional responsibilities in the shul, including presenting Divrei Torah between mincha and maariv. These inspired and inspiring young men embody the vision of our Yeshiva. They are hard working students preparing to engage the world around them in a variety of professional and leadership endeavors. And they are B’nei Torah who

are Kovea Itim L’Torah, setting aside regular time each day to devote to Torah study. Their presence and actions send a very strong message to the community as to the central place Torah study has in our lives, and I am proud that our alumni are the messengers of this concept.

Many Frum families have been faced with the challenge of what types of media to allow in their homes. Many parents feel that the content of secular children’s entertainment does not align with Torah values and ideas, and often can be antithetical to those ideals. At the same time, parents often need something to keep children occupied. Many Jewish children’s videos have been created to provide wholesome entertainment that instills Jewish values and often adds educational value. The quality of these videos often is below the standard of secular videos made for a wider audience. “Master of a Good Name,” a stop motion capture animated film depicting 6 stories of the Baal Shem Tov, provides a level of wholesome, quality, Jewish themed, children’s entertainment. The film features the voices of Mayim Bialik, Roseanne Barr, and Dudu Fisher. The creative forces behind “Master of a Good Name” are director/writer Tawd B. Dorenfeld and Rabbi Natan Halevy. Dorenfeld has been working in the film and animation industry since the late 90’s, having worked for both Columbia Records and the DreamWorks Animation Department. Halevy is a former Chabad Shaliach, and now a businessman in