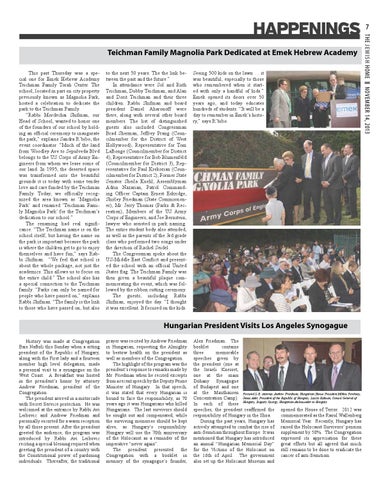 to the next 50 years. The the link between the past and the future.” In attendance were Sol and Ruth Teichman, Dubby Teichman, and Alan and Dorit Teichman and their three children. Rabbi Shifman and board president Daniel Aharonoff were there, along with several other board members. The list of distinguished guests also included Congressman Brad Sherman, Jeffrey Prang (Councilmember for the District of West Hollywood), Representative for Tom LaBonge (Councilmember for District 4), Representative for Bob Blumenfeld (Councilmember for District 3), Representative for Paul Krekorian (Councilmember for District 2), Former State Senator Sheila Kuehl, Assemblyman Adrin Nazarian, Patrol Commanding Officer Captain Ernest Eskridge, Shirley Friedman (State Commissioner), Mr. Jerry Thomas (Parks & Recreation), Members of the US Army Corps of Engineers, and Joe Bernstein, lawyer who assisted in park naming. The entire student body also attended, as well as the parents of the 3rd grade class who performed two songs under the direction of Rachel Seidel. The Congressman spoke about the US-Middle East Conflict and presented the school with an official United States flag. The Teichman Family was then given a beautiful plaque commemorating the event, which was followed by the ribbon cutting ceremony. The guests, including Rabbi Shifman, enjoyed the day. “I thought it was excellent. It focused on the kids.

Seeing 500 kids on the lawn … it was beautiful, especially to those who remembered when it started with only a handful of kids.” Emek opened its doors over 50 years ago, and today educates hundreds of students. “It will be a day to remember in Emek’s history,” says R’bibo.

Hungarian President Visits Los Angeles Synogague History was made at Congregation Bais Naftoli this Sunday when a sitting president of the Republic of Hungary, along with the First lady and a fourteen member high level delegation, made a personal visit to a synagogue on the West Coast. A Breakfast was hosted in the president’s honor by attorney Andrew Friedman, president of the Congregation. The president arrived in a motorcade with Secret Service protection. He was welcomed at the entrance by Rabbi Avi Leibovic and Andrew Friedman and personally escorted for a warm reception by all those present. After the president greeted the audience, the program was introduced by Rabbi Avi Leibovic reciting a special blessing required when greeting the president of a country with the Constitutional power of pardoning individuals. Thereafter, the traditional

prayer was recited by Andrew Friedman in Hungarian, requesting the Almighty to bestow health on the president as well as members of the Congregation. The highlight of the program was the president’s response to remarks made by Mr. Friedman when he recited excerpts from a recent speech by the Deputy Prime Minister of Hungary. In that speech, it was stated that every Hungarian is bound to face the responsibility, as 70 years ago it was Hungarians who killed Hungarians. The last survivors should be sought out and compensated, while the surviving memories should be kept alive, as Hungary’s responsibility. Hungary will use the 70th anniversary of the Holocaust as a reminder of the imperative “never again”. The president presented the Congregation with a booklet in memory of the synagogue’s founder,

Alex Friedman. The booklet contains three memorable speeches given by the president (one at the Israeli Knesset, one at the main Dohany Synagogue of Budapest and one at the Mauthausen Pictured L-R: attorney Andrew Friedman, Hungarian House President Miklos Perehazy, Concentration Camp). Janos Ader, President of the Republic of Hungary, Laszlo Kalman, Consul General of In each of these Hungary, Szapary Gyorgy, Hungarian Ambassador to Hungary speeches, the president reaffirmed the opened the House of Terror. 2012 was commemorated as the Raoul Wallenberg responsibility of Hungary in the Shoa. During the past years, Hungary has Memorial Year. Recently, Hungary has actively attempted to combat the rise of raised the Holocaust Survivors’ pension anti-Semitism throughout Europe. It was supplement by 50%. The Congregation mentioned that Hungary has introduced expressed its appreciation for these an annual “Hungarian Memorial Day” great efforts but all agreed that much for the Victims of the Holocaust on still remains to be done to eradicate the the 16th of April. The government cancer of anti-Semitism. also set up the Holocaust Museum and

This past Thursday was a special one for Emek Hebrew Academy Teichman Family Torah Center. The school, located in part on city property previously known as Magnolia Park, hosted a celebration to dedicate the park to the Teichman Family. “Rabbi Mordechai Shifman, our Head of School, wanted to honor one of the founders of our school by holding an official ceremony to inaugurate the park,” explains Sandra R’bibo, the event coordinator. “Much of the land from Woodley Ave to Sepulveda Blvd belongs to the US Corps of Army Engineers from whom we lease some of our land. In 1995, the deserted space was transformed into the beautiful grounds it is today with some tender love and care funded by the Teichman Family. Today, we officially recognized the area known as ‘Magnolia Park’ and renamed ‘Teichman Family Magnolia Park’ for the Teichman’s dedication to our school.” The renaming had real significance. “The Teichman name is on the school itself, but having the name on the park is important because the park is where the children get to go to enjoy themselves and have fun,” says Rabbi Shifman. “We feel that school is about the whole package, not just the academics. This allows us to focus on the entire child.” The school also has a special connection to the Teichman family. “Parks can only be named for people who have passed on,” explains Rabbi Shifman. “The family is the link to those who have passed on, but also