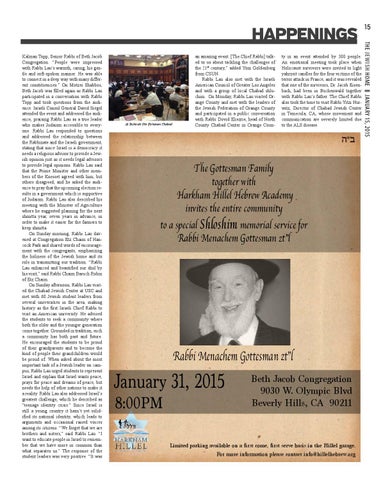 ty in an event attended by 300 people. An emotional meeting took place when Holocaust survivors were invited to light yahrzeit candles for the four victims of the terror attack in France, and it was revealed that one of the survivors, Dr. Jacob Eisenbach, had been in Buchenwald together with Rabbi Lau’s father. The Chief Rabbi also took the time to visit Rabbi Yitzi Hurwitz, Director of Chabad Jewish Center in Temecula, CA, whose movement and communication are severely limited due to the ALS disease.

an amazing event. [The Chief Rabbi] talked to us about tackling the challenges of the 21st century,” added Yoni Goldenberg from CSUN. Rabbi Lau also met with the Israeli American Council of Greater Los Angeles and with a group of local Chabad shluchim. On Monday, Rabbi Lau visited Orange County and met with the leaders of the Jewish Federation of Orange County and participated in a public conversation with Rabbi Dovid Eliezrie, head of North County Chabad Center in Orange Coun-

Kalman Topp, Senior Rabbi of Beth Jacob Congregation. “People were impressed with Rabbi Lau’s warmth, caring, his gentle and soft-spoken manner. He was able to connect in a deep way with many different constituencies.” On Motzei Shabbos, Beth Jacob was filled again as Rabbi Lau participated in a conversation with Rabbi Topp and took questions from the audience. Israeli Consul General David Siegel attended the event and addressed the audience, praising Rabbi Lau as a true leader who makes Judaism accessible to everyone. Rabbi Lau responded to questions and addressed the relationship between the Rabbinate and the Israeli government, stating that since Israel is a democracy it needs a religious advisor to provide a Jewish opinion just as it needs legal advisors to provide legal opinions. Rabbi Lau said that the Prime Minister and other members of the Knesset agreed with him, but others disagreed, and he asked the audience to pray that the upcoming election results in a government which is supportive of Judaism. Rabbi Lau also described his meeting with the Minister of Agriculture where he suggested planning for the next shmitta year, seven years in advance, in order to make it easier for the farmers to keep shmitta. On Sunday morning, Rabbi Lau davened at Congregation Etz Chaim of Hancock Park and shared words of encouragement with the congregants, emphasizing the holiness of the Jewish home and its role in transmitting our tradition. “Rabbi Lau enhanced and beautified our shul by his visit,” said Rabbi Chaim Baruch Rubin of Etz Chaim. On Sunday afternoon, Rabbi Lau visited the Chabad Jewish Center at USC and met with 60 Jewish student leaders from several universities in the area, making history as the first Israeli Chief Rabbi to visit an American university. He advised the students to seek a community where both the older and the younger generation come together. Grounded in tradition, such a community has both past and future. He encouraged the students to be proud of their grandparents and to become the kind of people their grandchildren would be proud of. When asked about the most important task of a Jewish leader on campus, Rabbi Lau urged students to represent Israel and explain that Israel wants peace, prays for peace and dreams of peace, but needs the help of other nations to make it a reality. Rabbi Lau also addressed Israel’s greatest challenge, which he described as “teenage identity crisis.” Since Israel is still a young country it hasn’t yet solidified its national identity, which leads to arguments and occasional raised voices among its citizens. “We forget that we are brothers and sisters,” said Rabbi Lau. “I want to educate people in Israel to remember that we have more in common than what separates us.” The response of the student leaders was very positive. “It was