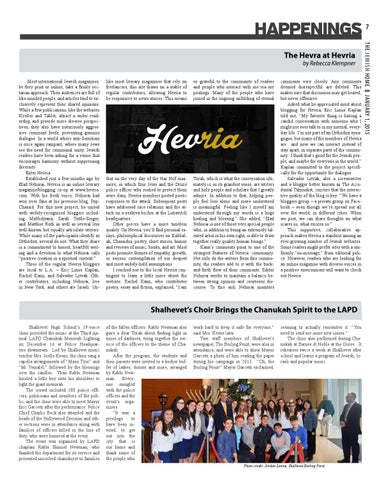 like most literary magazines that rely on freelancers, this site draws on a stable of regular contributors, allowing Hevria to be responsive to news stories. This means

so grateful to the community of readers and people who interact with me via my postings. Many of the people who have joined in the ongoing unfolding of eternal

that on the very day of the Har Nof massacre, in which four Jews and the Druze police officer who rushed to protect them were slain, Hevria members posted poetic responses to the attack. Subsequent posts have addressed race relations and the attack on a yeshiva bocher at the Lubavitch headquarters. Other pieces have a more timeless quality. On Hevria, you’ll find personal essays; philosophical discourses on Kabbalah, Chassidus, poetry, short stories, humor and reviews of music, books, and art. Most posts promote themes of empathy, growth, or serious contemplation of our deepest and most widely-held assumptions. I reached out to the local Hevria contingent to learn a little more about the website. Rachel Kann, who contributes poetry, essay and fiction, explained, “I am

Torah, which is what the conversation ultimately is, in its grandest sense, are writers and holy people and scholars that I greatly admire. In addition to that, helping people feel less alone and more understood is meaningful. Feeling like I myself am understood through my words is a huge healing and blessing.” She added, “Elad Nehorai is one of those very special people who, in addition to being an extremely talented artist in his own right, is able to draw together really quality human beings.” Kann’s comments point to one of the strongest features of Hevria: community. Not only do the writers form this community, the readers add to it with the backand-forth flow of their comments. Editor Nehorai works to maintain a balance between strong opinion and courteous discourse. To this end, Nehorai monitors

comments very closely. Any comments deemed disrespectful are deleted. This makes sure that discussion may get heated, but never offensive. Asked what he appreciated most about blogging for Hevria, Eric Linus Kaplan told me, “My favorite thing is having a candid conversation with someone who I might not ever talk to in my normal, everyday life. I’m not part of an Orthodox synagogue, but many of the members of Hevria are…and now we can interact instead of stay apart, in separate parts of the community. I think that’s good for the Jewish people, and maybe for everyone in the world.” Kaplan committed to the project specifically for the opportunity for dialogue. Salvador Litvak, also a screenwriter and a blogger better known as The Accidental Talmudist, concurs that the interactive quality of the blog is key. “We have a bloggers group – a private group on Facebook – even though we’re spread out all over the world, in different cities. When we post, we can share thoughts on what scares us, what excites us.” This supportive, collaborative approach makes Hevria a standout among an ever-growing number of Jewish websites. Some readers might prefer sites with a uniformly “on-message,” frum editorial policy. However, readers who are looking for an online magazine with diverse voices in a positive environment will want to check out Hevria.

Shalhevet’s Choir Brings the Chanukah Spirit to the LAPD Shalhevet High School’s 19-voice choir provided the music at the Third Annual LAPD Chanukah Menorah Lighting on December 16 at Police Headquarters downtown. Led by Shalhevet music teacher Mrs. Joelle Keene, the choir sang a capella arrangements of “Maoz Tzur” and “Mi Yemalel,” followed by the blessings over the candles. Then Rabbi Newman hoisted a little boy onto his shoulders to light the giant menorah. The crowd included 100 police officers, politicians and members of the public, and the choir were able to meet Mayor Eric Garcetti after the performance. Police Chief Charlie Beck also attended and the heads of the Hollywood Division and other sections were in attendance along with families of officers killed in the line of duty, who were honored at the event. The event was organized by LAPD chaplain Rabbi Shmuel Newman, who thanked the department for its service and presented inscribed chanukiyot to families

of the fallen officers. Rabbi Newman also gave a dvar Torah about finding light in times of darkness, tying together the service of the officers to the theme of Chanukah. After the program, the students and their parents were invited to a kosher buffet of latkes, donuts and more, arranged by Rabbi Newman. Everyone mingled with the police officers and the event’s organizers. “It was a privilege to have been invited, to get out into the city that is our home and thank some of the people who

work hard to keep it safe for everyone,” said Mrs. Keene later. Two staff members of Shalhevet’s newspaper, The Boiling Point, were also in attendance, and were able to show Mayor Garcetti a photo of him reading the paper during his campaign in 2013. “Oh, the Boiling Point!” Mayor Garcetti exclaimed,

seeming to actually remember it. “You need to send me some new issues.” The choir also performed during Chanukah at Barnes & Noble at the Grove. It rehearses twice a week at Shalhevet after school and learns a program of Jewish, Israeli and popular music.

Most international Jewish magazines, be they print or online, take a firmly sectarian approach. Their audiences are full of like-minded people, and articles tend to exclusively represent their shared opinions. While a few publications, like the websites Kveller and Tablet, attract a wider readership and provide more diverse perspectives, they also have notoriously aggressive comment feeds, preventing genuine dialogue. In a world where anti-Semitism is once again rampant, where many Jews see the need for communal unity, Jewish readers have been asking for a venue that encourages harmony without suppressing diversity. Enter Hevria. Established just a few months ago by Elad Nehorai, Hevria is an online literary magazine/blogging co-op at www.hevria. com. With his fresh voice, Nehorai had won over fans at his previous blog, PopChassid. For this new project, he united with widely-recognized bloggers including MaNishtana, Sarah Tuttle-Singer, and Matthue Roth as well as several less well-known but equally articulate writers. While many of the participants identify as Orthodox, several do not. What they share is a commitment to honest, heartfelt writing and a devotion to what Nehorai calls “positive creation in a spiritual context.” Three of the regular Hevria bloggers are local to L.A. – Eric Linus Kaplan, Rachel Kann, and Salvador Litvak. Other contributors, including Nehorai, live in New York, and others are Israeli. Un-

The Hevra at Hevria