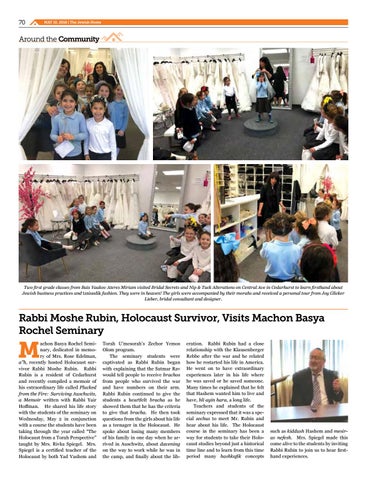 Two first grade classes from Bais Yaakov Ateres Miriam visited Bridal Secrets and Nip &amp; Tuck Alterations on Central Ave in Cedarhurst to learn firsthand about Jewish business practices and tzniusdik fashion. They were in heaven! The girls were accompanied by their morahs and received a personal tour from Joy Glicker Lieber, bridal consultant and designer.

achon Basya Rochel Seminary, dedicated in memory of Mrs. Rose Edelman, a”h, recently hosted Holocaust survivor Rabbi Moshe Rubin. Rabbi Rubin is a resident of Cedarhurst and recently compiled a memoir of his extraordinary life called Plucked from the Fire: Surviving Auschwitz, a Memoir written with Rabbi Yair Hoffman. He shared his life story with the students of the seminary on Wednesday, May 2 in conjunction with a course the students have been taking through the year called “The Holocaust from a Torah Perspective” taught by Mrs. Rivka Spiegel. Mrs. Spiegel is a certified teacher of the Holocaust by both Yad Vashem and

Torah U’mesorah’s Zechor Yemos Olom program. The seminary students were captivated as Rabbi Rubin began with explaining that the Satmar Rav would tell people to receive brachos from people who survived the war and have numbers on their arm. Rabbi Rubin continued to give the students a heartfelt bracha as he showed them that he has the criteria to give that bracha. He then took questions from the girls about his life as a teenager in the Holocaust. He spoke about losing many members of his family in one day when he arrived in Auschwitz, about davening on the way to work while he was in the camp, and finally about the lib-

eration. Rabbi Rubin had a close relationship with the Klausenberger Rebbe after the war and he related how he restarted his life in America. He went on to have extraordinary experiences later in his life where he was saved or he saved someone. Many times he explained that he felt that Hashem wanted him to live and have, bli ayin hara, a long life. Teachers and students of the seminary expressed that it was a special zechus to meet Mr. Rubin and hear about his life. The Holocaust course in the seminary has been a way for students to take their Holocaust studies beyond just a historical time line and to learn from this time period many hashkafik concepts

such as kiddush Hashem and mesiras nefesh. Mrs. Spiegel made this come alive to the students by inviting Rabbi Rubin to join us to hear firsthand experiences.