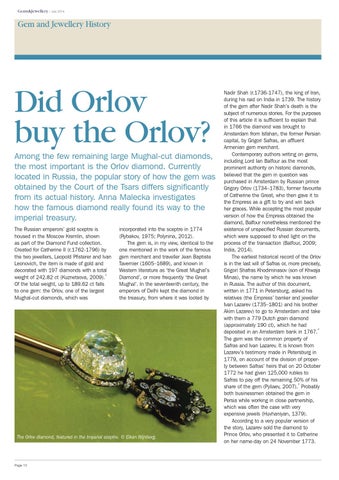 Did Orlov buy the Orlov? Among the few remaining large Mughal-cut diamonds, the most important is the Orlov diamond. Currently located in Russia, the popular story of how the gem was obtained by the Court of the Tsars differs significantly from its actual history. Anna Malecka investigates how the famous diamond really found its way to the imperial treasury. The Russian emperors’ gold sceptre is housed in the Moscow Kremlin, shown as part of the Diamond Fund collection. Created for Catherine II (r.1762-1796) by the two jewellers, Leopold Pfisterer and Ivan Leonovich, the item is made of gold and decorated with 197 diamonds with a total 1 weight of 242.82 ct (Kuznetsova, 2009). Of the total weight, up to 189.62 ct falls to one gem: the Orlov, one of the largest Mughal-cut diamonds, which was

incorporated into the sceptre in 1774 (Rybakov, 1975; Polynina, 2012). The gem is, in my view, identical to the one mentioned in the work of the famous gem merchant and traveller Jean Baptiste Tavernier (1605–1689), and known in Western literature as ‘the Great Mughal’s Diamond’, or more frequently ‘the Great Mughal’. In the seventeenth century, the emperors of Delhi kept the diamond in the treasury, from where it was looted by

The Orlov diamond, featured in the Imperial sceptre. © Elkan Wijnberg.

Nadir Shah (r.1736-1747), the king of Iran, during his raid on India in 1739. The history of the gem after Nadir Shah’s death is the subject of numerous stories. For the purposes of this article it is sufficient to explain that in 1766 the diamond was brought to Amsterdam from Isfahan, the former Persian capital, by Grigori Safras, an affluent Armenian gem merchant. Contemporary authors writing on gems, including Lord Ian Balfour as the most prominent authority on historic diamonds, believed that the gem in question was purchased in Amsterdam by Russian prince Grigory Orlov (1734–1783), former favourite of Catherine the Great, who then gave it to the Empress as a gift to try and win back her graces. While accepting the most popular version of how the Empress obtained the diamond, Balfour nonetheless mentioned the existence of unspecified Russian documents, which were supposed to shed light on the process of the transaction (Balfour, 2009; India, 2014). The earliest historical record of the Orlov is in the last will of Safras or, more precisely, Grigori Shafras Khodiminasov (son of Khwaja Minas), the name by which he was known in Russia. The author of this document, written in 1771 in Petersburg, asked his relatives (the Empress’ banker and jeweller Ivan Lazarev (1735–1801) and his brother Akim Lazarev) to go to Amsterdam and take with them a 779 Dutch grain diamond (approximately 190 ct), which he had 2 deposited in an Amsterdam bank in 1767. The gem was the common property of Safras and Ivan Lazarev. It is known from Lazarev’s testimony made in Petersburg in 1779, on account of the division of property between Safras’ heirs that on 20 October 1772 he had given 125,000 rubles to Safras to pay off the remaining 50% of his 3 share of the gem (Pyliaev, 2007). Probably both businessmen obtained the gem in Persia while working in close partnership, which was often the case with very expensive jewels (Huvhaniyan, 1379). According to a very popular version of the story, Lazarev sold the diamond to Prince Orlov, who presented it to Catherine on her name-day on 24 November 1773.