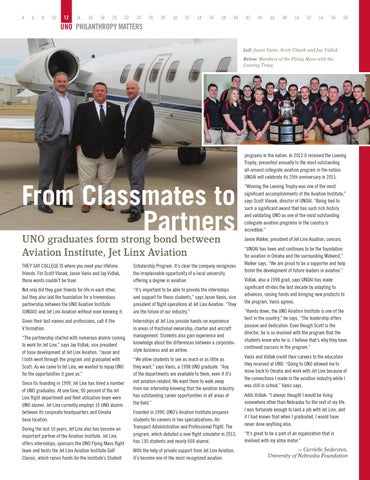 PHILANTHROPY MATTERS Left: Jason Vanis, Scott Vlasek and Jay Vidlak. Below: Members of the Flying Mavs with the Loening Tropy.

From Classmates to Partners UNO graduates form strong bond between Aviation Institute, Jet Linx Aviation THEY SAY COLLEGE IS where you meet your lifetime friends. For Scott Vlasek, Jason Vanis and Jay Vidlak, those words couldn’t be truer.

Scholarship Program. It’s clear the company recognizes the irreplaceable opportunity of a local university offering a degree in aviation.

Not only did they gain friends for life in each other, but they also laid the foundation for a tremendous partnership between the UNO Aviation Institute (UNOAI) and Jet Linx Aviation without even knowing it.

“It’s important to be able to provide the internships and support for these students,” says Jason Vanis, vice president of flight operations at Jet Linx Aviation. “They are the future of our industry.”

Given their last names and professions, call it the V formation.

Internships at Jet Linx provide hands-on experience in areas of fractional ownership, charter and aircraft management. Students also gain experience and knowledge about the differences between a corporatestyle business and an airline.

“The partnership started with numerous alumni coming to work for Jet Linx,” says Jay Vidlak, vice president of base development at Jet Linx Aviation. “Jason and I both went through the program and graduated with Scott. As we came to Jet Linx, we wanted to repay UNO for the opportunities it gave us.” Since its founding in 1999, Jet Linx has hired a number of UNO graduates. At one time, 90 percent of the Jet Linx flight department and fleet utilization team were UNO alumni. Jet Linx currently employs 16 UNO alumni between its corporate headquarters and Omaha base location. During the last 10 years, Jet Linx also has become an important partner of the Aviation Institute. Jet Linx offers internships, sponsors the UNO Flying Mavs flight team and hosts the Jet Linx Aviation Institute Golf Classic, which raises funds for the institute’s Student

“We allow students to see as much or as little as they want,” says Vanis, a 1998 UNO graduate. “Any of the departments are available to them, even if it’s not aviation-related. We want them to walk away from our internship knowing that the aviation industry has outstanding career opportunities in all areas of the field.” Founded in 1990, UNO’s Aviation Institute prepares students for careers in two specializations: Air Transport Administration and Professional Flight. The program, which debuted a new flight simulator in 2013, has 130 students and nearly 600 alumni. With the help of private support from Jet Linx Aviation, it’s become one of the most recognized aviation

programs in the nation. In 2012 it received the Loening Trophy, presented annually to the most outstanding all-around collegiate aviation program in the nation. UNOAI will celebrate its 25th anniversary in 2015. “Winning the Loening Trophy was one of the most significant accomplishments of the Aviation Institute,” says Scott Vlasek, director of UNOAI. “Being tied to such a significant award that has such rich history and validating UNO as one of the most outstanding collegiate aviation programs in the country is incredible.” Jamie Walker, president of Jet Linx Aviation, concurs. “UNOAI has been and continues to be the foundation for aviation in Omaha and the surrounding Midwest,” Walker says. “We are proud to be a supporter and help foster the development of future leaders in aviation.” Vidlak, also a 1998 grad, says UNOAI has made significant strides the last decade by adapting to advances, raising funds and bringing new products to the program. Vanis agrees. “Hands down, the UNO Aviation Institute is one of the best in the country,” he says. “The leadership offers passion and dedication. Even though Scott is the director, he is so involved with the program that the students know who he is. I believe that’s why they have continued success in the program.” Vanis and Vidlak credit their careers to the education they received at UNO. “Going to UNO allowed me to move back to Omaha and work with Jet Linx because of the connections I made in the aviation industry while I was still in school,” Vanis says. Adds Vidlak: “I always thought I would be living somewhere other than Nebraska for the rest of my life. I was fortunate enough to land a job with Jet Linx, and if I had known that when I graduated, I would have never done anything else. “It’s great to be a part of an organization that is involved with my alma mater.” 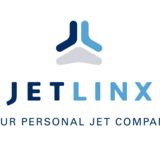