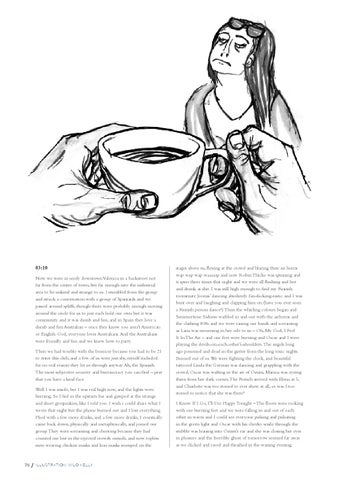 03:10 Now we were in seedy downtown Valencia in a backstreet not far from the centre of town, but far enough into the industrial area to be unkind and strange to us. I stumbled from the group and struck a conversation with a group of Spaniards and we passed around spliffs, though there were probably enough moving around the circle for us to just each hold our own but it was community and it was dumb and fun, and in Spain they love a dumb and fun Australian – once they know you aren’t American or English. God, everyone loves Australians. And the Australians were friendly and fun and we knew how to party. Then we had trouble with the bouncer because you had to be 21 to enter this club, and a few of us were just shy, myself included. for no real reason they let us through anyway. Ah, the Spanish. The most subjective security and bureaucracy you can find – pray that you have a kind face. Well I was inside, but I was real high now, and the lights were burning. So I hid in the upstairs bar and gawped at the strange and short gymjunkies, like I told you. I wish i could share what I wrote that night but the phone burned out and I lost everything. Plied with a few more drinks, and a few more drinks, I eventually came back down, physically and metaphysically, and joined our group. They were screaming and cheering because they had counted me lost in the rejected crowds outside, and now topless men wearing chicken masks and lion masks stomped on the

stages above us, flexing at the crowd and blaring their air horns wap wap wap waaaaap and now Robin Thicke was spinning and it spun three times that night and we were all flushing and hot and drunk as shit. I was still high enough to find my Finnish roommate Joonas’ dancing absolutely fan-fucking-tastic and I was bent over and laughing and clapping him on (have you ever seen a Finnish person dance?) Then the whirling colours began and Summertime Sadness warbled in and out with the airhorns and the clashing 808s and we were raising our hands and screaming as Lana was mourning in her ode to us – Oh, My God, I Feel It In The Air – and our feet were burning and Oscar and I were playing the devils-on-each-other’s-shoulders. The angels long ago poisoned and dead in the gutter from the long toxic nights. Burned out of us. We were fighting the clock, and beautiful tattooed Linda the German was dancing and grappling with the crowd, Oscar was wafting in the air of Özüm, Marina was eyeing them from her dark corner, The French arrived with Elena at 5, and Charlotte was too stoned to ever show at all, or was I too stoned to notice that she was there? I Know If I Go, I’ll Die Happy Tonight – The floors were rocking with our burning feet and we were falling in and out of each other in waves and I could see everyone pulsing and pulsating in the green light and Oscar with his cheeky smile through the stubble was leaning into Özüm’s ear and she was closing her eyes in pleasure and the horrible ghost of tomorrow seemed far away as we clicked and raved and thrashed in the waning evening. 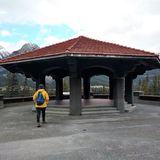 The Travel issue included University of Wollongong student Alex Pike's photo essay 'North But Not Forgotten,' which follows his travels in A...

The Travel issue included University of Wollongong student Alex Pike's photo essay 'North But Not Forgotten,' which follows his travels in A...