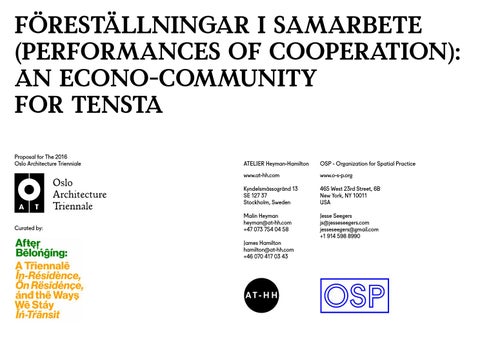 FÖRESTÄLLNINGAR I SAMARBETE (PERFORMANCES OF COOPERATION): AN ECONO-COMMUNITY FOR TENSTA Proposal for The 2016 Oslo Architecture Trienniale

FÖRESTÄLLNINGAR I SAMARBETE (PERFORMING COOPERATION): AN ECONO-COMMUNITY FOR TENSTA Architecture is one of many factors that contribute to a society’s culture, one might say its sense of belonging to a place and time: a statement of values. Yet architecture is notoriously slow and costly. Usually a favored instrument of those that have access to capital and the “WE ARE stability to stay in one INTERESTED place for long periods of IN ONGOING time – years, generations, PROCESSES THAT centuries – architecture is LACK DEFINED “’political plastic’–social BEGINNINGS forces slowing into form.” AND ENDINGS.”* As a result, those without accumulated capital and the ability to remain in a location – like refugees and migrants – are denied the cultural belonging that architecture provide to

any given population. But what if there were spatial products that could substitute for the societal function that architecture plays culturally in addition to satisfying the basic needs of shelter? What if these disenfranchised populations could have nearly instantaneous, free or cheap space for a variety of activities before committing to a permanent building? This architectural platform, a kind of spatial operating system, could buttress already-existing and yet-to-emerge local knowledge exchange platforms and social networks, in the process generating economic value and stronger community.

non-residential activity as “THE SLOW one possible means of “putWITHDRAWAL ting down roots” in a place OF THE and establishing a self-susWELFARE taining economic communiSTATE IS ONE ty, or Econo-Community. SUCH PROCESS, Our proposal is furWHICH CAN ther developed into three (3) ALSO BE phases. First, we will make a UNDERSTOOD large (8-meters in diameter) AS A FORM OF sphere inflatable, affection- VIOLENCE.”* ately dubbed the “Mother Bubble.” We will conduct workshops to teach residents how to make their own inflatables, and produce social events inside the inflatables to generate revenue for even more workshops. This cycle will continue under our direction until phase two, when

inings, of Collaboration and Cooperation, we propose a combination of a digital platform that serves as an operating system for a network of inflatable spaces which can provide Tensta residents with highly visible areas to host the underground, bottom-up networks of social cooperation that already exist in Tensta, the Kvinnocenter i Tensta-Hjulsta being one such network. Our plan proposes employing pneumatically supported structures (air-pressure-inflated membranes) which are incredibly cheap to fabricate, can be moved from site to site, and can be blown up and taken down in a matter of minutes. Moving beyond their stigmatic associations with 60s and 70s radical architecture movements, this proposal imagines a use for modest inflatable spaces that can provide temporary, nomadic and flexible locations for

This is the proposal of Föreställningar I Samarbete. Roughly translating to Performances, or Imag-

residents can borrow the inflatables on the online platform for a variety of suggested non-residential programs. Constantly iterating and tweaking the operating system, phase three will see the system handed off to the residents via a cooperative legal framework similar to the Swedish bostadsrĂ¤ttsfĂśreningar housing cooperative structure. Phase three will also coincide with the OAT exhibition in Oslo.

Through the bounded investing model of Circular flow of income, the system can create (read: sustainable) economic ecosystems in which the value created by a community is then reinvested in the community, in ways ranging from SL Card subsidies to longer-durational forms (buildings, architecture). This economic community, or econo-community directly addresses the 43% unemployment rate,

attempting to spur economic development by flooding the supply of available semi-public space in which to gather, socialize, and conduct business. The inflatables, in different situations fill different activitiesâ&#x20AC;&#x2122; needs for space, but instead of these activities being in basements, the inflatable makes them visible, engaging the environment in the process. Over the course of the year, a donation-based or voluntary 1-2% tax revenue stream goes to establish a cooperative fund, which aims to support the local community by becoming a savings portfolio to eventually become a down payment on a construction loan to house the various emergent programs that took place inside the inflatables. Who knows, maybe some people will prefer the inflatables, once it becomes the local vernacular architecture?

PHASE 1: “MOTHER BUBBLE” 1.0 – Using a small portion of the budget, fabricate a “Mother Bubble,” an inflatable that will be 3/5 of a geodesic dome with a diameter of 15 meters 1.1 – Within the Mother Bubble, hold workshops to teach and fabricate smaller inflatables, and announce a free public lending program 1.2 – Develop a web platform to register, promote, educate, and reserve the children bubbles (starting in April 2016) 1.3 – launch the web platform, and invite Tensta residents to register in order to borrow future inflatables 1.4 – Program kick-off events in the Mother Bubble in collaboration with KTH in Tensta, the KTH, KKH and/or Tensta Konsthal 1.5 – From the event proceeds, hold workshops to teach and make more, smaller children inflatables

INFLATABLE GENEAOLOGY One “Mother Bubble” is made as an example, in which workshops are held and for which events are programmed. In Phase 1, our team will plan and carry out the initial events, inviting residents of Tensta to learn more about the project. Local residents will have the opportunity to learn and start proposing alternative uses that can be housed in inflatable architectures and suggest what kind of activities need space. Phase 2

The online platform is the heart of the project: it simultaneously collects and broadcasts the collective desires of the Tensta residents.

PHASE 2: OPERATING SYSTEM 2.0 – Focus on the rules of the operating system/online platform: how people borrow them, when people borrow them and for what programs. 2.1 – Collect feedback from resident-borrowers about to what extent their needs were satisfied by the inflatables 2.2 – Adjust the rules, protocols, feedback loops, and analytics of the system, both physical and digital 2.3 – Continue to lead educational workshops, this time with the intent of training other residents to lead inflatable-making workshops themselves 2.4 – Encourage residents to come up with their own programming and alternative (mis)uses 2.5 – Establish the cooperative fund and begin establishing the bostadsrättsförening financial and legal framework, including its governance structure and volunteers

“[OTHER FORMS OF VIOLENCE INCLUDE] A SUBWAY CARD SO EXPENSIVE IT CAN’T BE AFFORDED, OR A POLICE PRESENCE SO CONSTANT IT POSES A THREAT BY ITSELF”*

Through the bounded investing model of Circular Flow of Income, the system can create economic ecosystems in which the value created by a community is then reinvested in the community. Eventually, the fund will grow large enough to empower the community to have the agency to build their own more permanent structures to house the programs that had provisionally existed inside the temporary inflatables. In this way, the inflatable spaces act like a “starter-kit” for more permanent architecture, and the more permanent architecture is a “starter-kit” for a sustained community of social connections and mutual trust. In this way architecture has the potential to not just reinforce existing structures of power and control, but can emerge over time from the accumulation of Phase 3 collective desire

A place to pick up and return the inflatables to, centrally located, potentially mobile, which might eventually be a more conventional piece of architecture in central Tensta.

3.0 – Incubate the bostadsrättsförening and maintain the online platform, supplementing it with new functions if necessary. 3.1 – identify and designate a local community liaison, a cooperative fund manager, and a Mother Bubble resident administrator. 3.2 – Bring one of the children inflatables to Oslo for the duration of the Oslo Architecture Triennale 3.3 – Intensively document through photography, video, interviews, and object evidence that remains from the events and workshops 3.4 – At the conclusion of the OAT, hand off the administration and maintenance of the bostadsrättsförening and the online platform

1.0 – MOMENT LEADERS: Jesse Seegers, Malin Heyman, James Hamilton Using a small portion of the budget we will fabricate a “Mother Bubble,” an inflatable that will be 3/5 of a geodesic dome with a diameter of 8 meters using 2-4mil thick polyethylene plastic sheeting and heavy duty tape / iron to seal and heat weld the pieces together. This will be constructed in a local space, most likely Tensta Gymnasiums sport hall over the span of a few days, from the sourcing of material to construction. The construction will be carried out by the team; Jesse, Malin, James and workshop participants from the KTH in Tensta, the KTH and Tensta Konsthal. 1.1 – MOMENT LEADERS: Jesse Seegers, Malin Heyman, James Hamilton Within the Mother Bubble will hold workshops to teach and fabricate smaller inflatables, and announce a free public lending program. Workshops will be organized to make new inflatables within “Mother Bubble”. These workshops will take place over the span of two weeks in mid-March. The workshops will be led by the team at first. Then they will be led by new team members and volunteers who will be established as the competence of workshop participants rises. The dissemination of information will be done through workshops, online “How to” videos and pamphlets. Conversations, meetings and workshops at the site will be carried out by Jesse, Malin and James. 1.2 – MOMENT LEADERS: Jesse Seegers, Malin Heyman, James Hamilton + back end web developer Develop a web platform to register, promote, educate, and reserve the children bubbles (starting in April 2016). The web platform will be developed and managed in Stockholm. This will happen simultaneously to the production of the mother bubble and the first workshops. The web platform will also work to record and organize the data pertaining to lending, borrowing and registration.

Phase 3: If you Love it Set it Free

* In the event that the budget is subsumed due to unforeseen circumstances, The OSP/AT-HH team will fundraise from private and public sources primarily in the United States, Sweden, Norway and Denmark. These may include Statens Konstfond grants, US arts grants, and US-based private donors.

Archaeology of the Digital: Media and Machines

Stockholm, 2014-2015 “Learning from the City and Beyond” Postgraduate study

Cooper Union for the Advancement of Science and Art Royal Institute of Technology School of Architecture Stockholm, 2004-2007, 2012

The Cooper Union for The Advancement of Science and Art

New Preston, Connecticut, 2013 Design, detailing and construction management for a play space, made of suspended safety netting in a tall cylindrical space

The National Film School of Denmark

Guest critic at the final reviews of Re-store: Alteration as a Critical Device, Masters studio taught by Andreas Angelidakis and Espen Vatn

November 2015: “Föreställningar kring arkitekturens medelpunkt” on the performative qualities of the circle in the KTH School of Architecture new academic building by Tham & Videgård

Take A Walk On The Wild Side, exhibition catalogue Förestäliningar i Samarbete (Performances of Cooperation): an Econo-Community for Tensta - OAT

"Förestäliningar i Samarbete (Performances of Cooperation): an Econo-Community for Tensta" is a proposal for the 2016 Oslo Architecture Trie...

Förestäliningar i Samarbete (Performances of Cooperation): an Econo-Community for Tensta - OAT

"Förestäliningar i Samarbete (Performances of Cooperation): an Econo-Community for Tensta" is a proposal for the 2016 Oslo Architecture Trie...