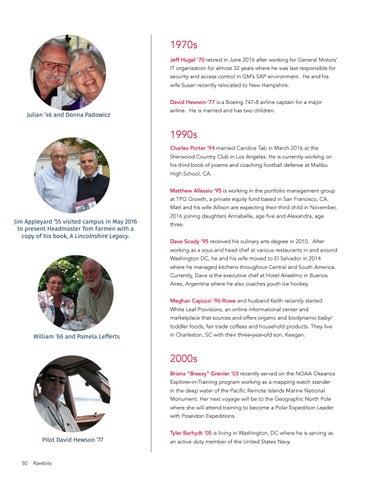 1970s Jeff Hugel ‘70 retired in June 2016 after working for General Motors’ IT organization for almost 32 years where he was last responsible for security and access control in GM’s SAP environment. He and his wife Susan recently relocated to New Hampshire. David Hewson ‘77 is a Boeing 747-8 airline captain for a major

airline. He is married and has two children.

1990s Charles Porter ‘94 married Candice Tab in March 2016 at the Sherwood Country Club in Los Angeles. He is currently working on his third book of poems and coaching football defense at Malibu High School, CA. Matthew Allessio ‘95 is working in the portfolio management group at TPG Growth, a private equity fund based in San Francisco, CA. Matt and his wife Allison are expecting their third child in November,

Jim Appleyard ‘55 visited campus in May 2016 to present Headmaster Tom Farmen with a copy of his book, A Lincolnshire Legacy.

2016 joining daughters Annabelle, age five and Alexandra, age three. Dave Soady ‘95 received his culinary arts degree in 2010. After working as a sous and head chef at various restaurants in and around Washington DC, he and his wife moved to El Salvador in 2014 where he managed kitchens throughout Central and South America. Currently, Dave is the executive chef at Hotel Anselmo in Buenos Aires, Argentina where he also coaches youth ice hockey. Meghan Capozzi ‘96 Rowe and husband Keith recently started White Leaf Provisions, an online informational center and marketplace that sources and offers organic and biodynamic baby/ toddler foods, fair trade coffees and household products. They live

in Charleston, SC with their three-year-old son, Keegan.

2000s Briana “Breezy” Grenier ‘03 recently served on the NOAA Okeanos Explorer-in-Training program working as a mapping watch stander in the deep water of the Pacific Remote Islands Marine National Monument. Her next voyage will be to the Geographic North Pole where she will attend training to become a Polar Expedition Leader with Poseidon Expeditions.

Tyler Barhydt ‘05 is living in Washington, DC where he is serving as an active duty member of the United States Navy. 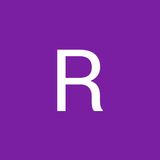