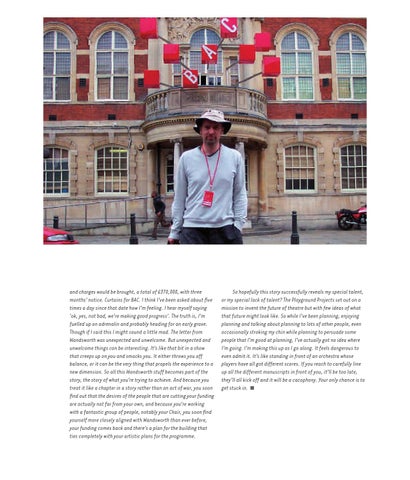 and charges would be brought, a total of £370,000, with three months’ notice. Curtains for BAC. I think I’ve been asked about ﬁve times a day since that date how I’m feeling. I hear myself saying ‘ok, yes, not bad, we’re making good progress’. The truth is, I’m fuelled up on adrenalin and probably heading for an early grave. Though if I said this I might sound a little mad. The letter from Wandsworth was unexpected and unwelcome. But unexpected and unwelcome things can be interesting. It’s like that bit in a show that creeps up on you and smacks you. It either throws you off balance, or it can be the very thing that propels the experience to a new dimension. So all this Wandsworth stuff becomes part of the story, the story of what you’re trying to achieve. And because you treat it like a chapter in a story rather than an act of war, you soon ﬁnd out that the desires of the people that are cutting your funding are actually not far from your own, and because you’re working with a fantastic group of people, notably your Chair, you soon ﬁnd yourself more closely aligned with Wandsworth than ever before, your funding comes back and there’s a plan for the building that ties completely with your artistic plans for the programme.

So hopefully this story successfully reveals my special talent, or my special lack of talent? The Playground Projects set out on a mission to invent the future of theatre but with few ideas of what that future might look like. So while I’ve been planning, enjoying planning and talking about planning to lots of other people, even occasionally stroking my chin while planning to persuade some people that I’m good at planning, I’ve actually got no idea where I’m going. I’m making this up as I go along. It feels dangerous to even admit it. It’s like standing in front of an orchestra whose players have all got different scores. If you reach to carefully line up all the different manuscripts in front of you, it’ll be too late, they’ll all kick off and it will be a cacophony. Your only chance is to get stuck in. < The Producers: Alchemists of the Impossible

The Producers: Alchemists of the Impossible was commissioned by Arts Council England and the Jerwood Charitable Foundation to celebrate and...

The Producers: Alchemists of the Impossible

The Producers: Alchemists of the Impossible was commissioned by Arts Council England and the Jerwood Charitable Foundation to celebrate and...