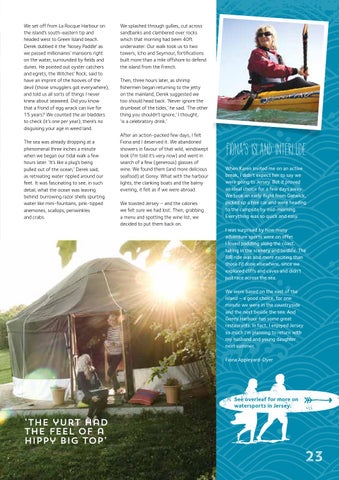 We set off from La Rocque Harbour on the island’s south-eastern tip and headed west to Green Island beach. Derek dubbed it the ‘Nosey Paddle’ as we passed millionaires’ mansions right on the water, surrounded by fields and dunes. He pointed out oyster catchers and egrets, the Witches’ Rock, said to have an imprint of the hooves of the devil (those smugglers got everywhere), and told us all sorts of things I never knew about seaweed. Did you know that a frond of egg wrack can live for 15 years? We counted the air bladders to check (it’s one per year); there’s no disguising your age in weed land. The sea was already dropping at a phenomenal three inches a minute when we began our tidal walk a few hours later. ‘It’s like a plug’s being pulled out of the ocean,’ Derek said, as retreating water rippled around our feet. It was fascinating to see, in such detail, what the ocean was leaving behind: burrowing razor shells spurting water like mini-fountains, pink-tipped anemones, scallops, periwinkles and crabs.

We splashed through gullies, cut across sandbanks and clambered over rocks which that morning had been 40ft underwater. Our walk took us to two towers, Icho and Seymour, fortifications built more than a mile offshore to defend the island from the French. Then, three hours later, as shrimp fishermen began returning to the jetty on the mainland, Derek suggested we too should head back. ‘Never ignore the drumbeat of the tides,’ he said. ‘The other thing you shouldn’t ignore,’ I thought, ‘is a celebratory drink.’ After an action-packed few days, I felt Fiona and I deserved it. We abandoned showers in favour of that wild, windswept look (I’m told it’s very now) and went in search of a few (generous) glasses of wine. We found them (and more delicious seafood) at Gorey. What with the harbour lights, the clanking boats and the balmy evening, it felt as if we were abroad. We toasted Jersey – and the calories we felt sure we had lost. Then, grabbing a menu and spotting the wine list, we decided to put them back on.

FIONA’S ISLAND INTERLUDE When Karen invited me on an active break, I didn’t expect her to say we were going to Jersey. But it proved an ideal choice for a few days away. We took an early flight from Gatwick, picked up a hire car and were heading to the campsite by mid-morning. Everything was so quick and easy. I was surprised by how many adventure sports were on offer. I loved paddling along the coast, taking in the scenery and birdlife. The RIB ride was also more exciting than those I’d done elsewhere, since we explored cliffs and caves and didn’t just race across the sea. We were based on the east of the island – a good choice, for one minute we were in the countryside and the next beside the sea. And Gorey Harbour has some great restaurants. In fact, I enjoyed Jersey so much I’m planning to return with my husband and young daughter next summer. Fiona Appleyard-Dyer

See overleaf for more on watersports in Jersey.

‘The yurt had the feel of a hippy Big Top’

The Island of Jersey's 'Pure Jersey' Holiday Guide 2015. This is not your usual, run-of-the-mill holiday brochure. Pure Jersey is a travel and lifestyle magazine, written by a range of contributors who know their subject. 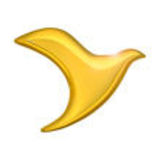