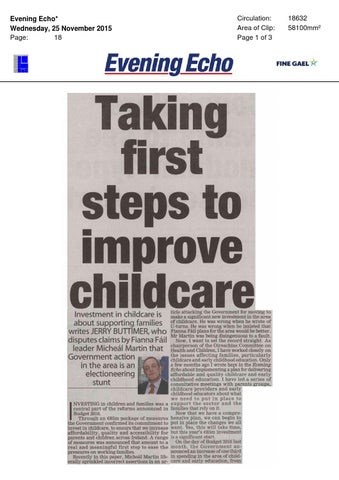 Circulation: Area of Clip: Page 1 of 3

Investment in childcare is about supporting families writes JERRY BUTTIMER, who disputes claims by Fianna Fail leader Micheal Martin that Government action in the area is an electioneering stunt

in children and families was a central part of the reforms announced in Budget 2016. Through an €85m package of measures the Government confirmed its commitment to invest in childcare, to ensure that we increase affordability, quality and accessibility for parents and children across Ireland. A range of measures was announced that amount to a real and meaningful first step to ease the pressures on working families. &#39; r in this paper, Micheal Martin lib1 incorrect assertions in an ar¬

ticle attacking the Government for moving to make a significant new investment in the area of childcare. He was wrong when he wrote of U-tums. He was wrong when he insisted that Fianna Fail plans for the area would be better. Mr Martin was being disingenuous to a fault. Now, I want to set the record straight. As chairperson of the Oireachtas Committee on Health and Children, I have worked closely on the issues affecting families, particularly childcare and early childhood education. Only a few months ago I wrote hepe in the Evening Echo about implementing a plan for delivering affordable and quality childcare and early childhood education. I have led a series of consultative meetings with parents groups, childcare providers and early childhood educators about what we need to put in place to support the sector and the famihes that rely on it. Now that we have a comprehensive plan, we can begin to put in place the changes we all want. Yes, this will take time, but this year’s €85m investment is a significant start. On the day of Budget 2016last month, the Government announced an increase of one third in spending in the area of childcare and early education, from

€260m this year, to €345m next year. Mr Martin said this was an electioneering stunt, when in fact it followed almost a year of

Circulation: Area of Clip: Page 2 of 3

nity/not-for-profit and private providers, so more parents can have access. A range of measures to improve the provision of after-school childcare, including a work involving eight different capital fund to develop after-school services Government departments, a using existing school (and other community) range of experts and academics, facilities in conjunction with local providers, and involving consultation processes both community/not-for-profit and private. with parents, experts and Additional investment in free preschool, with the childcare sector. In January matched by improvements in quality. of this year, Children’s However, the budget also provided the Minister James Reilly established necessary funding to put in place a new single the inter-departmental Affordable Childcare Programme to provide group and tasked it with providing working families with good-quality childcare multi-annual investment options at a cost they can afford by 2017.A special Project to Government. Far from Team will undertake the massive being an election stunt, the planning to make that outcome a reality. budget childcare announ cement These are real advances, carefully worked was one of the most carefully thought-out decisions, involving analysis of the best practice out, the opposite to a stunt. If you want to see a and best evidence from around the world. stunt, look at the Fianna Fail proposal to have tax breaks for childcare. It is widely acknowledged Budget 2016set out the range of extra investments, here and internationally that the only but more than that; it was an endorsement of the report into future investment in certain outcome of such a move leads to an childcare, published in July, which outlines increased cost for childcare. plans for the next number of years. The public Jerry Buttimer is a Fine Gael TD for Cork South Central and is Chairperson of the Oireachtas can see the intended direction of travel over Committee on Health and Children. the next number of years. One key element relates to changes in free pre-school. On Budget Day the Government announced that as of September 2016, all children aged three can enter free pre-school and stay till the start of primary school. Previously, children were entitled to one year of pre-school, equating to 38 weeks of care. Previously, children could only be admitted to pre-school at the beginning of the school year, but from September they will be admitted at three different points, including in January 2017and in April 2017. Entitlements will vary, depending on date of birth, but it equates to an average of 23 weeks of extra care. To suggest that such a proposal is an electioneering stunt betrays Mr Martin’s lack of knowledge. In fact, it was an important recommendation of the earlier Expert Advisory Group on the Early Years Strategy, which reported in 2013. By starting the change in September of next year, and by allowing three separate entry points, the initiative has the advantage of allowing the sector to prepare in terms of creating added capacity and enhanced quality. The attendance levels will grow incrementally. By September of next year we estimate that 89,000will avail of pre-school. By April of 2017that number will have risen to 127,000. Let’s look at some of the other elements to the Budget 2016childcare package: A new model of supports for children with a disability so that these children can fully participate in pre-school. An additional 8,000places in 2016under the Community Childcare Subvention (CCS) programme. These low-cost places will, for the first time, be available through both commu¬

Circulation: Area of Clip: Page 3 of 3