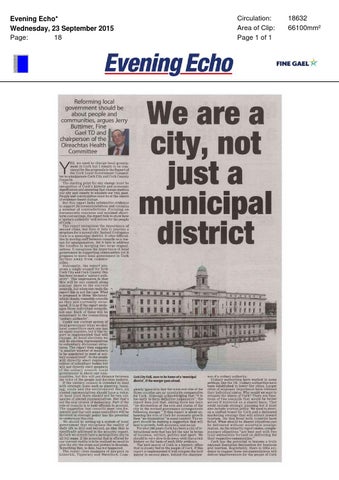 Reforming local government should be about people and communities, argues Jerry Buttimer, Fine Gael TD and chairperson of the Oireachtas Health Committee we need to change local government in Cork but I remain to be convinced by the proposals in the Report of the Cork Local Government Committee to amalgamate Cork City and Cork County Councils. The starting point for any change must be recognition of Cork’s historic and economic significance and ensuring that change enables our city and county to emulate our rich past. People and communities must be at the centre of evidence-based change. But this report lacks substantive evidence to support its recommendations and contains a number of contradictions. Focusing on bureaucratic concerns and minimal shortterm cost savings, the report fails to show how a ‘unitary authority’ will deliver for the people of Cork. The report recognises the importance of second cities, but then it fails to provide a structure for a second city. Instead it relegates Cork to a municipal district. It cites difficulties in moving staff between councils as a reason for amalgamation. Yet it fails to address the hurdles in merging two large organisations. It recognises the importance of local government in supporting communities yet it proposes to move local government in Cork further away from communities.

Circulation: Area of Clip: Page 1 of 1

We are a city, not just a municipal district

Notionally, the report proposes a single council for both Cork City and Cork County; this has been termed a ‘unitary authority’. The impression is that this will be one council along similar lines to the current councils, but when one reads the report this is not the case. What is proposed is three ‘divisions’ which closely resemble councils as they are currently structured, it is as if the report envisages three individual councils, not one. Each of these will be subsidiary to the overarching ‘unitary authority’. Under our current system of local government when we elect local councillors each one has an equal mandate, but if this report is implemented that will change. At local elections we will be electing representatives to subsidiary divisional structures. The report then suggests “a smaller number of members to be appointed to meet at unitary council level”. So the people will directly elect representatives of subsidiary bodies but will not directly elect members of the unitary council. Local government is about our communities, but this will put distance between son of a unitary authority. CorkCityHall,soon to be home of a ‘municipal Unitary authorities have worked in some the voice of the people and decision makers. district', if the merger goes ahead. settings, like the UK. Unitary authorities have If the unitary council is intended to deal been established in lower tier cities. Larger with strategic issue such as planning, housing, roads and the environment then all pletely ignored is that the scale and size of the cities of economic importance have retained elected representatives should have a voice. their individual status. Why would we want to three counties are an unsuitable comparative At local level there should not be two categories for Cork. Although acknowledging that “it is relegate the status of Cork? There are functions of elected representatives. But that’s too early to form definitive judgements”, the of two councils that would be better not the only erosion of democracy. Part of the report does just that, stating there has been served if delivered on a shared basis. That role of councils is to hold officials to account. “no diminution of the role and status of the could include strategic planning but it must The suggestion that councils meet less frequently city in the revised governance arrangements also include tourism policy. We need to develop and that only some councillors will be following merger.” If this report is about enhancinga unified brand for Cork and a dedicated involved in strategic policy has the potential the role of Cork for economic growth marketing strategy that will attract inward to undermine this role. then “no diminution” is scant comfort. The report tourism. On this front both councils have We should be setting up a system of local should be making a suggestion that will failed. What should be shared objectives can government that recognises the reality of lead to growth, both economic and social. be delivered without uncertain amalgamation. daily life in 2015 and beyond; an idea that is For over 800 years Cork has been a city of international As the minority report states, complementary specifically addressed in the minority report. note that has led the way in terms objectives “are best met with two In Cork we already have a metropolitan city in of business, culture, politics and sport. We local authorities focused on delivering for all but name. If the potential that is offered by should be very slow to do away with that a rich their respective communities.” our current reality is to be realised we need to history on the basis of such little evidence. Cork has the potential to become a truly give the city the scope and powers to flourish. The lord mayor of Cork is a historic office eminent European destination for business Something that, to date, has not happened. that is closely tied to the people of Cork. If this and tourism. Regrettably, there is little evidence The report cites examples of mergers in report is implemented it will relegate the lord to suggest these recommendations will Limerick, Tipperary and Waterford. Comdeliver improvements for the people of Cork mayor to second place, behind the chairper¬