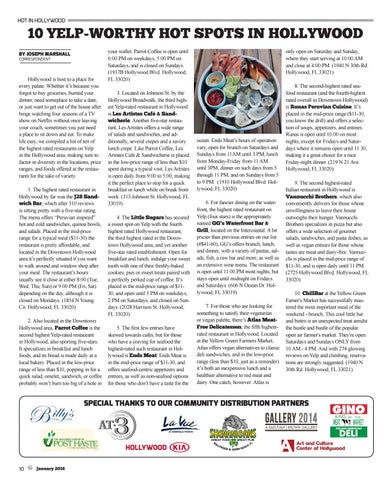 Hollywood is host to a place for every palate. Whether it’s because you forgot to buy groceries, burned your dinner, need someplace to take a date, or just want to get out of the house after binge watching four seasons of a TV show on Netflix without once leaving your couch, sometimes you just need a place to sit down and eat. To make life easy, we compiled a list of ten of the highest rated restaurants on Yelp in the Hollywood area, making sure to factor in diversity in the locations, price ranges, and foods offered at the restaurants for the sake of variety. 1. The highest rated restaurant in Hollywood by far was the J28 Sandwich Bar, which after 310 reviews is sitting pretty with a five-star rating. The menu offers “Peruvian inspired” hot and cold sandwiches, quinoa bowls, and salads. Placed in the mid-price range for a typical meal ($11-30) the restaurant is pretty affordable, and located in the Downtown Hollywood area it’s perfectly situated if you want to walk around and window shop after your meal. The restaurant’s hours usually see it close at either 8:00 (Tue, Wed, Thu, Sun) or 9:00 PM (Fri, Sat) depending on the day, although it is closed on Mondays. (1854 N Young Cir. Hollywood, FL 33020) 2. Also located in the Downtown Hollywood area, Parrot Coffee is the second highest Yelp-rated restaurant in Hollywood, also sporting five-stars. It specializes in breakfast and lunch foods, and its bread is made daily at a local bakery. Placed in the low-price range of less than $10, popping in for a quick salad, omelet, sandwich, or coffee probably won’t burn too big of a hole in

your wallet. Parrot Coffee is open until 6:00 PM on weekdays, 5:00 PM on Saturdays, and is closed on Sundays. (1917B Hollywood Blvd. Hollywood, FL 33020) 3. Located on Johnson St. by the Hollywood Broadwalk, the third highest Yelp-rated restaurant in Hollywood is Les Artistes Café & Sandwicherie. Another five-star restaurant, Les Artistes offers a wide range of salads and sandwiches, and additionally, several crepes and a savory lunch crepe. Like Parrot Coffee, Les Artistes Café & Sandwicherie is placed in the low-price range of less than $10 spent during a typical visit. Les Artistes is open daily from 9:00 to 5:00, making it the perfect place to stop for a quick breakfast or lunch while on break from work. (313 Johnson St. Hollywood, FL 33019) 4. The Little Sugars has secured a sweet spot on Yelp with the fourth highest rated Hollywood restaurant, the third highest rated in the Downtown Hollywood area, and yet another five-star rated establishment. Open for breakfast and lunch, indulge your sweet tooth with one of their freshly-baked cookies, pies or sweet treats paired with a perfectly perked cup of coffee. It’s placed in the mid-price range of $1130, and open until 5 PM on weekdays, 2 PM on Saturdays, and closed on Sundays. (2028 Harrison St. Hollywood, FL 33020) 5. The first few entries have skewed towards cafés, but for those who have a craving for seafood the highest-rated such restaurant in Hollywood is Ends Meat. Ends Meat is in the mid-price range of $11-30, and offers seafood-centric appetizers and entrees, as well as non-seafood options for those who don’t have a taste for the

ocean. Ends Meat’s hours of operation vary, open for brunch on Saturdays and Sundays from 11AM until 3 PM, lunch from Monday-Friday from 11 AM until 3PM, dinner on such days from 5 through 11 PM, and on Sundays from 5 to 9 PM. (1910 Hollywood Blvd. Hollywood, FL 33020) 6. For fancier dining on the waterfront, the highest rated restaurant on Yelp (four stars) is the appropriately named GG’s Waterfront Bar & Grill, located on the Intercoastal. A bit pricier than previous entries on our list (#$41-60), GG’s offers brunch, lunch, and dinner, with a variety of pastas, salads, fish, a raw bar and more, as well as an extensive wine menu. The restaurant is open until 11:00 PM most nights, but stays open until midnight on Fridays and Saturdays. (606 N Ocean Dr. Hollywood, FL 33019) 7. For those who are looking for something to satisfy their vegetarian or vegan palette, there’s Atlas MeatFree Delicatessen, the fifth highestrated restaurant in Hollywood. Located at the Yellow Green Farmers Market, Atlas offers vegan alternatives to classic deli sandwiches, and in the low-price range (less than $10, just as a reminder) it’s both an inexpensive lunch and a healthier alternative to red meat and dairy. One catch, however: Atlas is

8. The second-highest rated seafood restaurant (and the fourth-highest rated overall in Downtown Hollywood) is Runas Peruvian Cuisine. It’s placed in the mid-price range ($11-30, you know the drill) and offers a selection of soups, appetizers, and entrees. Runas is open until 10:00 on most nights, except for Fridays and Saturdays where it remains open until 11:30, making it a great choice for a nice Friday-night dinner. (219 N 21 Ave. Hollywood, FL 33020) 9. The second highest-rated Italian restaurant in Hollywood is Vannucchi Brothers, which also conveniently delivers for those whose unwillingness to leave their house outweighs their hunger. Vannucchi Brothers specializes in pizza but also offers a wide selection of gourmet salads, sandwiches, and pasta dishes, as well as vegan entrees for those whose tastes are meat and dairy-free. Vannucchi is placed in the mid-price range of $11-30, and is open daily until 11 PM. (2725 Hollywood Blvd. Hollywood, FL 33020) 10. ChillBar at the Yellow Green Famer's Market has successfully mastered the most important meal of the weekend - brunch. This cool little bar and bistro is an unexpected treat amidst the hustle and bustle of the popular open air farmer's market. They're open Saturdays and Sundays ONLY from 10 AM - 4 PM. And with 274 glowing reviews on Yelp and climbing, reservations are strongly suggested. (1940 N 30th Rd. Hollywood, FL 33021)

SPECIAL THANKS TO OUR COMMUNITY DISTRIBUTION PARTNERS 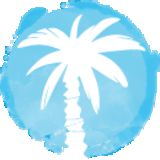