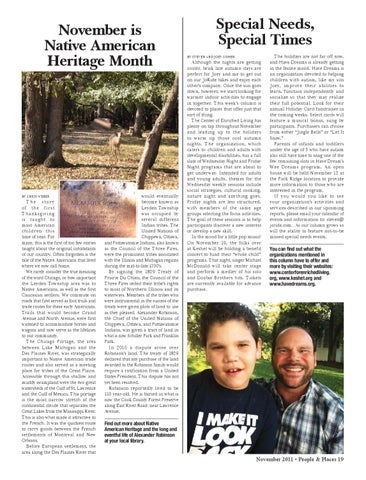 The story of the f irst T ha n k sg iv i ng i s t aught t o most American ch i ldren t h is time of year. For many, this is the first of too few stories taught about the original inhabitants of our country. Often forgotten is the tale of the Native Americans that lived where we now call home. We rarely consider the true meaning of the word Chicago, or how important the Leyden Township area was to Native Americans, as well as the first Caucasian settlers. We commute on roads that first served as foot trails and trade routes for these early Americans. Trails that would become Grand Avenue and North Avenue, were first widened to accommodate horses and wagons and now serve as the lifelines to our community. The Chicago Portage, the area between Lake Michigan and the Des Plaines River, was strategically important to Native American trade routes and also served as a meeting place for tribes of the Great Plains. Accessible through this shallow and muddy swampland were the two great watersheds of the Gulf of St. Lawrence and the Gulf of Mexico. This portage is the most narrow stretch of the continental divide that separates the Great Lakes from the Mississippi River. This is also what made it attractive to the French. It was the quickest route to carry goods between the French settlements of Montreal and New Orleans. Before European settlement, the area along the Des Plaines River that

would eventually become known as Leyden Township was occupied by several different Indian tribes. The United Nations of Chippewa, Ottawa, and Pottawatomie Indians, also known as the Council of the Three Fires, were the prominent tribes associated with the Illinois and Michigan regions during the mid-to-late 1700’s. By signing the 1829 Treaty of Prairie Du Chien, the Council of the Three Fires ceded their tribe’s rights to most of Northern Illinois and its waterways. Members of the tribes who were instrumental in the success of the treaty were given plots of land to use as they pleased. Alexander Robinson, the Chief of the United Nations of Chippewa, Ottawa, and Pottawatomie Indians, was given a tract of land in what is now Schiller Park and Franklin Park. In 2010 a dispute arose over Robinson’s land. The treaty of 1829 declared that any purchase of the land awarded to the Robinson family would require a ratification from a United States President. This dispute has not yet been resolved. Robinson reportedly lived to be 110 year-old. He is buried in what is now the Cook County Forest Preserve along East River Road near Lawrence Avenue.

Although the nights are getting cooler, brisk late autumn days are perfect for Joey and me to get out on our JoRide bikes and enjoy each other’s company. Once the sun goes down, however, we start looking for warmer indoor activities to engage in together. This week’s column is devoted to places that offer just that sort of thing. The Center of Enriched Living has plenty on tap throughout November and leading up to the holidays to warm up those cool autumn nights. The organization, which caters to children and adults with developmental disabilities, has a full slate of Wednesday Night and Friday Night programs that are about to get underway. Intended for adults and young adults, themes for the Wednesday weekly sessions include social strategies, cultural cooking, nature night and anything goes. Friday nights are less structured, with members of the same age groups selecting the focus activities. The goal of these sessions is to help participants discover a new interest or develop a new skill. In the mood for a little pop music? On November 19, the folks over at Keshet will be holding a benefit concert to fund their “whole child” programs. That night, singer Michael McDonald will take center stage and perform a medley of his solo and Doobie Brothers hits. Tickets are currently available for advance purchase.

The holidays are not far off now, and Have Dreams is already getting in the festive mood. Have Dreams is an organization devoted to helping children with autism, like my son Joey, improve their abilities to learn, function independently and socialize so that they may realize their full potential. Look for their annual Holiday Card fundraiser in the coming weeks. Select cards will feature a musical bonus, sung by participants. Purchasers can choose from either “Jingle Bells” or “Let It Snow.” Parents of infants and toddlers under the age of 3 who have autism also still have time to snag one of the few remaining slots in Have Dream’s Wee Dreams program. An open house will be held November 12 at the Park Ridge location to provide more information to those who are interested in the program. If you would you like to see your organization’s activities and services described in our upcoming reports, please email your calendar of events and information to: steven@ joride.com. As our column grows so will the ability to feature not-to-be missed special needs events.

You can find out what the organizations mentioned in this column have to offer and more by visiting their websites: www.centerforenrichedliving. org, www.keshet.org and www.havedreams.org.

Find out more about Native American Heritage and the long and eventful life of Alexander Robinson at your local library. 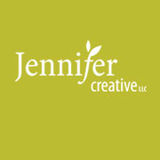