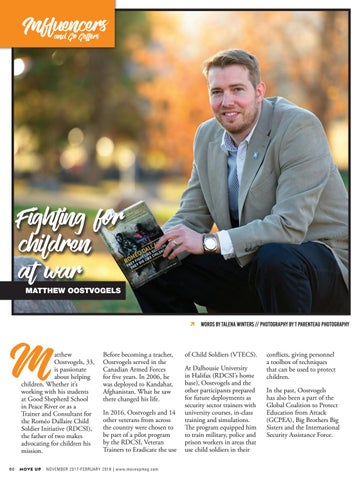 atthew Oostvogels, 33, is passionate about helping children. Whether it’s working with his students at Good Shepherd School in Peace River or as a Trainer and Consultant for the Roméo Dallaire Child Soldier Initiative (RDCSI), the father of two makes advocating for children his mission.

Before becoming a teacher, Oostvogels served in the Canadian Armed Forces for five years. In 2006, he was deployed to Kandahar, Afghanistan. What he saw there changed his life. In 2016, Oostvogels and 14 other veterans from across the country were chosen to be part of a pilot program by the RDCSI, Veteran Trainers to Eradicate the use

of Child Soldiers (VTECS). At Dalhousie University in Halifax (RDCSI’s home base), Oostvogels and the other participants prepared for future deployments as security sector trainers with university courses, in-class training and simulations. The program equipped him to train military, police and prison workers in areas that use child soldiers in their

conflicts, giving personnel a toolbox of techniques that can be used to protect children. In the past, Oostvogels has also been a part of the Global Coalition to Protect Education from Attack (GCPEA), Big Brothers Big Sisters and the International Security Assistance Force. 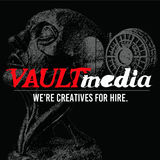 In this Issue: 5 Influencers and Go Getters, North to Alaska Conference, Social Media Trends and more ~ Move Up Magazine is Northwestern Alb...

In this Issue: 5 Influencers and Go Getters, North to Alaska Conference, Social Media Trends and more ~ Move Up Magazine is Northwestern Alb...