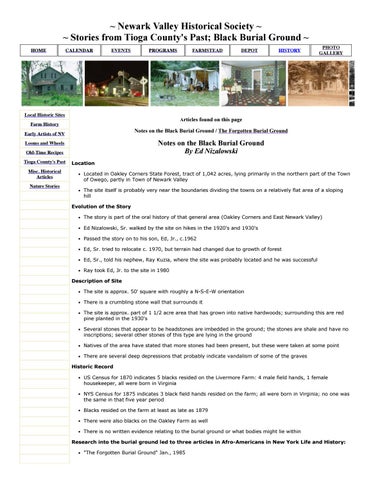 Location Located in Oakley Corners State Forest, tract of 1,042 acres, lying primarily in the northern part of the Town of Owego, partly in Town of Newark Valley The site itself is probably very near the boundaries dividing the towns on a relatively flat area of a sloping hill Evolution of the Story The story is part of the oral history of that general area (Oakley Corners and East Newark Valley) Ed Nizalowski, Sr. walked by the site on hikes in the 1920's and 1930's Passed the story on to his son, Ed, Jr., c.1962 Ed, Sr. tried to relocate c. 1970, but terrain had changed due to growth of forest

Ed, Sr., told his nephew, Ray Kuzia, where the site was probably located and he was successful

The site is approx. 50' square with roughly a N­S­E­W orientation

There is a crumbling stone wall that surrounds it

Notes on the Black Burial Ground By Ed Nizalowski

Articles found on this page

The site is approx. part of 1 1/2 acre area that has grown into native hardwoods; surrounding this are red pine planted in the 1930's

Natives of the area have stated that more stones had been present, but these were taken at some point

Blacks resided on the farm at least as late as 1879

There were also blacks on the Oakley Farm as well

Research into the burial ground led to three articles in Afro­Americans in New York Life and History: "The Forgotten Burial Ground" Jan., 1985

"Margaret Williams and the Black Community of Owego" Jan., 1986

"Murder in Newark Valley, 1879: The Murder of Elbridge Rewey and the Trial and Execution of Daniel Searles" Jan., 1987

Application made to National Register for Historic Places (March, 2000)

Highlights relating to Black History in Tioga County Prior to Revolutionary War Blacks present in the Southern Tier prior to white settlement (escaped slaves who had been accepted by Native Americans) Black man captured at Battle of Newtown by American forces during the Clinton­Sullivan campaign 1790­1865 Slavery existed in Tioga County (New York was largest slave holding state north of the Mason­Dixon line immediately following the Revolutionary War US Census 1820: 80 slaves, 32 freeman (Tioga County still included Chemung) Majority of slaves in Town of Caroline area; had been settled by group from Virginia and Maryland Slavery abolished in 1827; part of 28 year process Black church established in Owego (1842); AME Church of Owego (Bethel Church) Blacks can be found in nearly every town in Tioga County (at some point); highest concentration and greatest community development in Village of Owego Underground Railroad activity very likely in Tioga County; several homes strong candidates: Farrington & Pinney (Owego) and Carlisle (Berkshire) No evidence of Blacks being involved in the Underground Railroad to date Several area Blacks enlisted in the Civil War Post­Civil War

General statement relating to the Black presence in Tioga County: Blacks were not treated as complete equals, but it was still a place where success and respect could be attained especially in particular fields. In this environment they were able to raise families, establish roots, develop community institutions, and play an important part in the county's history. A number of individuals and particular

families are worthy of recognition. For Blacks not to be part of the county history would leave a huge gap in the historic record.   Notes relating to the History of the Livermore Farm

Madison retired from farming some time in the 1880's and moved to the Village; the home that he built is at 148 Main St.

Jan. 1, 1913 (Merrill Mott) Merrill was a victim of the flu epidemic of 1918 October 8, 1919 (Ambrose Hofman) Ambrose was an immigrant from Bavaria, who had recently successfully raised beef cattle in South Dakota. Those were his plans for the Livermore farm. Unfortunately, the price of beef dropped from 20 cents a lb. to 7 cents in the years after World War I. Ambrose died of a heart attack in 1926. The farm was left to his widow and two children. June 26, 1933 New York State Selling price was $1,987.72 (about $3.52 per acre) Buildings could be removed until July 27, 1933 and timber removed until Jan. 1, 1934. The main barn (over 100' long) and horse barn were in good condition; the house was in fair condition although it hadn't been occupied in a number of years This farm along with the Oakley Farm became the Oakley Corners State Forest. Red pine was planted in much of the acreage with native hardwoods left to reseed themselves The Human Presence in the State Forest The story of the Livermore Farm is similar to thousands of hill farms in what were known as the "old agricultural districts" (New England and Middle Atlantic States). Some land of this type was being abandoned even before the Civil War, but the rate of vacancy mushroomed in the period from 1880­1920. The final blow to many hill farms was the Great Depression at which time NYS bought many hundreds of these farms for back taxes. The story of settlement and the process of abandonment can often be seen as one walks down a trail or views

the forest from a vantage point. The plantings of the 1930's are readily apparent, but one can often notice differences in the age of trees from one area to another. These often represent fields or pasture that had been left vacant from varying time periods. An empty field will soon result in a proliferation of golden rod, briars and brush that soon lead to the first species of trees (birch, poplar, sumac, pin cherry). After a generation these trees provide the environment for the climax species of the eastern hardwoods forest (maple, oak, ash, black cherry, beech). Intermixed are the two softwood species (white pine and eastern hemlock).  Seeing anything that matches the quality and height of the primeval forest that was here when the first settlers came is a rare occurrence. Only a small percentage of the forest east of the Mississippi escaped clear cutting. The canopy height was in the 150' range with numerous trees of only moderate dimensions (2' to 3' in diameter). Mammoth trees did exist, however. Mention is made of white pine in the Town of Candor being 175' high and 5' in diameter (Gay's Gazeteer). This type of forest takes several centuries to come into being and will only occur in places that are completely protected. With hardwoods being of such value, most trees are harvested long before they can reach this kind of growth. The human presence can be seen in a variety of ways. Stone walls are often encountered as well as piles of stone. A line fence indicated by left over strands of wire will often show dramatic differences in the age of trees and their species from one side to another. A very old fence line or border between two fields or two parcels of property often indicates some line of demarcation even though no strands of wire are visible. A cistern constructed near a spring can often be seen in a former field that was once the domain of cattle.

Foundations for barns, outbuildings and homes will generally show a different type of vegetation. Much of this may have been introduced or is simply a function of the home being a place of residence even after the fields had been left to nature. Burial grounds or cemeteries are not an infrequent occurrence. Families were allowed to bury on their own property well into the 19th century. Although this still can be done, it is not customary practice. As you walk through the hills on various trails or simply "bushwhack" your way on an adventure, you are encountering the archeological sites of the next century and beyond. But what is so very remarkable is that much of the history can be traced through deed transactions and there is still time to record many of the stories before the hills cover them with foliage and the ravages of weather and time. One never knows when a forgotten story could lead to an adventure. Some natural features to notice as you drive down the state lands road from Oakley Corners to our disembarking point: The old road and the state road are the same first .2 of a mile. At the sharp left it takes a new direction; the old road would have gone straight into the woods The trees for the first 1/2 mile are native hardwoods that are relatively young As you come to the bottom of the grade, there are more eastern hemlock (approx. .6 mile); they become very prominent along the stream Once over the stream you begin to see plantings of red pine

An excellent source of information on this type of interpretation can be found in the book "Reading the Forested Landscape A Natural History of New England" by Tom Wessels The Countryman Press, 1997. Back to Top The Forgotten Burial Ground By Ed Nizalowski

The burial ground is located in the Oakley Corners State Forest, County of Tioga, which is in the Southern Tier of New York. My father, who grew up on a nearby farm, would go there for walks in the 1930's. State forests often have cemeteries, but this one was a bit unusual because according to the local folk, Blacks were buried there. My father's curiosity was piqued, but his inquiries yielded little information and the burial ground became a mystery.

My father mentioned the burial ground to me several times in the 1960's in the hope that he could return to the site. Although he passed on before he was able to do so, he had described the location to my cousin, who took me there in 1981. It was quite a thrill to finally see the place. It is surrounded by a crumbling stone wall. There are field stones which appear to be headstones, but they have no inscriptions. I became caught up in the mystery and began my search. In making inquiries, several elderly residents referred to the place as the old Livermore farm. This led me to the State and Federal Census books and when I looked at the records from the 1870's, I had another thrill. Etched on the yellowed paper were the names of Blacks employed as field hands and a woman employed as a housekeeper. With their birthplace listed as Virginia, I assumed they must have been former slaves who somehow found their way north after the Civil War. But further research led me to discover an Afro­American past in Tioga County that would span over 200 years.

I learned that several Blacks from this area gained prominence, including a world­renowned singer, William Cheeks. But even more important were the scores of individuals who raised families and tended their homes in a political and social climate which , although not entirely free of prejudice, brought about a considerable measure of success and respectability. The Livermore farm might not ordinarily generate any special interest, except for a brief period of its history when people of another race tilled its fields. My father discovered their burial place during one of his many walks into the woods satisfying his love of nature and the outdoors. But it was his love of history and his natural curiosity that made him realize that a black burial ground in the middle of a state woods had significance. The path that he hoped to follow to solve the mystery of their presence was cut short, but I was able to continue his journey, and it has led to the discovery of a unique and diverse Afro­ American heritage, part of which lies hidden in the hills and valleys of Tioga County. 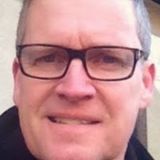