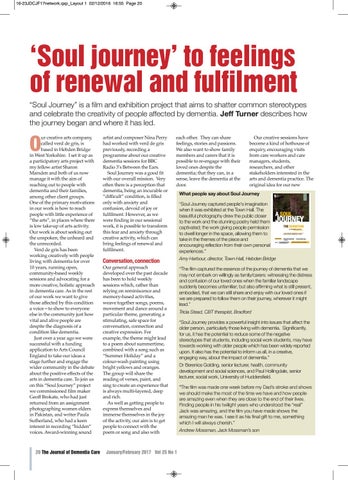 ‘Soul journey’ to feelings of renewal and fulfilment “Soul Journey” is a film and exhibition project that aims to shatter common stereotypes and celebrate the creativity of people affected by dementia. Jeff Turner describes how the journey began and where it has led. ur creative arts company, called verd de gris, is based in Hebden Bridge in West Yorkshire. I set it up as a participatory arts project with my fellow artist Sharon Marsden and both of us now manage it with the aim of reaching out to people with dementia and their families, among other client groups. One of the primary motivations in our work is how to reach people with little experience of “the arts”, in places where there is low take-up of arts activity. Our work is about seeking out the unspoken, the unheard and the unrecorded. Verd de gris has been working creatively with people living with dementia for over 10 years, running open, community-based weekly sessions and advocating for a more creative, holistic approach in dementia care. As in the rest of our work we want to give those affected by this condition a voice – to show to everyone else in the community just how vital and alive people are despite the diagnosis of a condition like dementia. Just over a year ago we were successful with a funding application to Arts Council England to take our ideas a stage further and engage the wider community in the debate about the positive effects of the arts in dementia care. To join us on this “Soul Journey” project we commissioned film maker Geoff Brokate, who had just returned from an assignment photographing women elders in Pakistan, and writer Paula Sutherland, who had a keen interest in recording “hidden” voices. Award-winning sound

20 The Journal of Dementia Care

artist and composer Nina Perry had worked with verd de gris previously, recording a programme about our creative dementia sessions for BBC Radio 3’s Between the Ears. Soul Journey was a good fit with our overall mission. Very often there is a perception that dementia, being an incurable or “difficult” condition, is filled only with anxiety and confusion, devoid of joy or fulfilment. However, as we were finding in our sessional work, it is possible to transform this fear and anxiety through creative activity, which can bring feelings of renewal and fulfilment.

each other. They can share feelings, stories and passions. We also want to show family members and carers that it is possible to re-engage with their loved ones despite the dementia; that they can, in a sense, leave the dementia at the door.

Conversation, connection Our general approach developed over the past decade has been to hold weekly sessions which, rather than relying on reminiscence and memory-based activities, weave together songs, poems, movement and dance around a particular theme, generating a stimulating, safe space for conversation, connection and creative expression. For example, the theme might lead to a poem about summertime, combined with a song such as “Summer Holiday” and a colour-wash painting using bright yellows and oranges. The group will share the reading of verses, paint, and sing to create an experience that is always multi-layered, deep and rich. As well as getting people to express themselves and immerse themselves in the joy of the activity, our aim is to get people to connect with the poem or song and also with

Our creative sessions have become a kind of hothouse of enquiry, encouraging visits from care workers and care managers, students, researchers, and other stakeholders interested in the arts and dementia practice. The original idea for our new

What people say about Soul Journey “Soul Journey captured people's imagination when it was exhibited at the Town Hall. The beautiful photography drew the public closer to the work and the stunning poetry held them captivated; the work giving people permission to dwell longer in the space, allowing them to take in the themes of the piece and encouraging reflection from their own personal experiences.”

Amy Harbour, director, Town Hall, Hebden Bridge “The film captured the essence of the journey of dementia that we may not embark on willingly as family/carers: witnessing the distress and confusion of our loved ones when the familiar landscape suddenly becomes unfamiliar; but also affirming what is still present, embodied, that we can still share and enjoy with our loved ones if we are prepared to follow them on their journey, wherever it might lead.” Tricia Stead, CBT therapist, Bradford “Soul Journey provides a powerful insight into issues that affect the older person, particularly those living with dementia. Significantly, for us, it has the potential to reduce some of the negative stereotypes that students, including social work students, may have towards working with older people which has been widely reported upon. It also has the potential to inform us all, in a creative, engaging way, about the impact of dementia.” Dr Berenice Golding, senior lecturer, health, community development and social sciences, and Paul Hollingdale, senior lecturer, social work, University of Huddersfield. "The film was made one week before my Dad’s stroke and shows we should make the most of the time we have and how people are amazing even when they are close to the end of their lives. Finding people in his twilight years who understood the “real” Jack was amazing, and the film you have made shows the amazing man he was. I see it as his final gift to me, something which I will always cherish.” Andrew Mossman, Jack Mossman’s son

project, Soul Journey, was to work intensively with one woman, Joan, and her husband Ian to explore the relationship between dementia and creativity by “journeying” through the landscape of the Upper Calder Valley. But in the end Joan was unable to proceed because of her dementia, although we were able to work instead with four individuals who regularly attend our creative dementia sessions in Hebden Bridge. These four became the basis of the Soul Journey film and exhibition project. We began by inviting Geoff Brokate and Paula Sutherland into the regular weekly sessions to let them absorb and reflect on the trust, love and empathy that arose out of these special group meetings. Although both Geoff and Paula chose to draw on the dramatic local landscape of the south Pennines as a metaphor in their resulting work, it was time spent in these sessions that would give their creative responses such depth and relevance. They spent many weeks sitting in with us, taking part in the group activities, chatting to participants and getting to know the four individuals as friends both inside and outside of the sessions. The resulting art work comprises a film, an exhibition of still photographs, original writing and an installation including a soundscape. One of our key aims was to try to open up a dialogue with the public, to challenge some of the misconceptions that have built up around this challenging and emotive condition. If, as a community, we could begin to move beyond our own fears and treat

n Jeff Turner is co-founder and manager of verd de gris, which runs participatory arts projects with a range of client groups including people with dementia and their families. “Soul Journey” is supported by Arts Council England and Creative Minds, part of South West Yorkshire Partnership NHS Foundation Trust. For further information or to watch the film go to www.verddegris.org or email jeff.vdg@btinternet.com

those with dementia as human beings with dignity and worth we might bring about a complete rethink in how we provide care and instead begin to celebrate our emotional connectedness, our sense of being. The film was made over a period of about eight weeks with both Geoff and Paula spending time with the four participants Kate, Jack, Norma and Margaret in their “home” environments: for Kate and Margaret this meant in the family home. For Jack and Norma this meant either in respite accommodation or residential care. Verd de gris’ co-manager Sharon was present at all times to allay any fears and it is her voice that can be heard throughout the film gently reassuring and singing songs that are familiar to the participants from the creative sessions. In his still images and in the film Geoff uses the landscape of the Upper Calder Valley to explore the process of ageing and dementia. He called this investigation “The Light Remains,” a reminder for us all to look for the spark of spirit that remains despite the

complexities of a condition like dementia. The shifting patterns of clouds across the landscape, the reflections on the abandoned mill ponds, the fragility of a single Autumn leaf were woven together with Paula’s poetry to create a kind of hymn to the inevitability of change, and the beauty of age and wisdom.

Touring prgramme We secured some high profile venues for our Soul Journey touring programme, including the National Media Museum in Bradford, the Bluecoat Arts Centre in Liverpool and Manchester Central Library, the Albany in Deptford and West Yorkshire Playhouse in Leeds. Currently the exhibition can be seen at the Salford Museum and Art Gallery, having formed the basis of the “Identity, Place & Dementia” symposium developed in partnership with Salford University’s Institute of Dementia in December. This exhibition programme has been complemented by workshops, film screenings and artist talks to audiences across the UK. By taking Soul Journey into these traditional gallery spaces we have been able to

contribute to the debate around representations of mental health, and in particular dementia. At Bradford Media Museum, for example, we had an audience of up to 26,000 overall, many of whom would never have seen dementia as a condition presented in such a creative way before. At Age UK’s Arch Cafe in Leeds, at Hebden Bridge Town Hall and at Manchester Central Library we were also given the opportunity to exhibit the creative dementia group’s paintings alongside the commissioned art work. It was a chance to showcase the quality of their creative writing and painting, but also to present a different impression of dementia to the public, challenging preconceived ideas about people living with the condition. We reached a particularly large audience with the film, which has shown on big screens in Bradford and Leeds as well as on the Community Channel. These screeningslalone were seen by more than 250,000 people. In addition, the film formed the basis of advocacy events and has been shown in GP surgeries and community health centres, as a way for local people to see dementia in a new light and participate in discussion about it. One cognitive behavioural (CBT) therapist who attended an event said the film “captured the essence of the journey of dementia” (see box). One of the benefits of the film has been that it helps us explain our approach to commissioners and potential partners in a profound way while also assisting care staff and students to empathise with many of the issues relating to dementia. We have developed strong links with Huddersfield University and with the local authority there. Above all, though, Soul Journey has made a vital connection with the people directly affected by dementia, highlighting and celebrating the artistic beauty that can be discovered in this very complex condition.

The Journal of Dementia Care 21 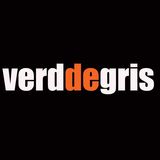 An article written by arts company verd de gris for the Jan/Feb 2017 edition of the Journal of Dementia Care. Showcasing the company's work...

An article written by arts company verd de gris for the Jan/Feb 2017 edition of the Journal of Dementia Care. Showcasing the company's work...