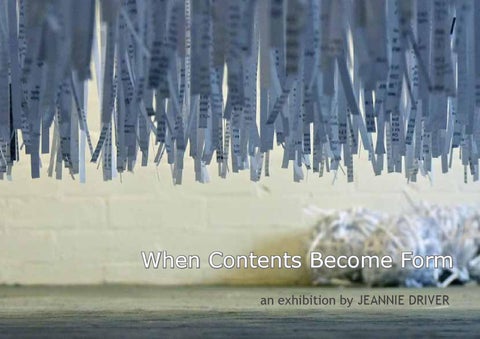 When Contents Become Form an exhibition by JEANNIE DRIVER

When Contents Become Form an exhibition by Jeannie Driver

When Contents Become Form It is often interesting the journey from studio to gallery, and this is certainly the case with the artist Jeannie Driver. To walk into her studio, in a converted church in Portsmouth, one is confronted with a blaze of ideas strewn across walls and floors; not finished works as you might find in the practices of other artists, but maquettes, photographic sketches, diagrams and bags and bags of shredded paper! Itâ&amp;#x20AC;&amp;#x2122;s quite an experience but what makes it more illuminating is Driverâ&amp;#x20AC;&amp;#x2122;s knowledge of what each piece of paper is, where it came from, and what it once said. This specificity of the material is central to each work. The paper has many origins, but for her latest exhibition, When Contents Become Form, Driver has chosen to utilise press releases she has sourced from some of the most revered galleries in the country. These words become atomised, diffuse and rather than providing a solid framework for understanding, they are rendered pure material. Such text that remains is so detached from its origination and so densely packed, that the experience is an entirely visual one. The carved up letters and punctuation merely a landscape of black and white forms. They have a poetic beauty of their own. The central work, entitled White3, is a perfect cube constructed by suspending thousands of shredded paper lengths in a grid centrally within the gallery space. Driver actually made and installed the work in situ, to the extent of shredding the paper on site, so the entire act of production occurred within the confines of the gallery. 3

The mechanical act of shredding the paper (a machine is used) I find fascinating. This repetitive act has an almost performative aspect to it that feeds into oneâ&amp;#x20AC;&amp;#x2122;s broader experience of the work. There is something almost meditative about this event, and yet it similarly evokes the production line uniformity of the light industry that would have previously occupied the space in which it now resides. This machined, uniform material is beautifully thrown into relief by the obsessively hand crafted nature of Driverâ&amp;#x20AC;&amp;#x2122;s practice. This presence of the hand made lends the work a deeply felt human quality; there is a fragility and poignancy here that manages to undercut the stringent adherence to a highly calculated and predetermined concept. For such minimal work to offer such warmth is a credit to Driverâ&amp;#x20AC;&amp;#x2122;s ambition. As one walks around this suspension in space, it reacts to the eddies and air streams that pervade the gallery, swaying and undulating as a forest does. A continual but often barely perceptible motion. A forest too, in the way light penetrates, illuminating it in strange and beautiful ways. At certain moments one can see straight through the structure and mass, at other times the forms converge and seem in some way solid, impenetrable and opaque. It is this oscillation between a sense of solidity and ephemerality that softens the hard minimal edges of the work both physically and conceptually. A subtle and beautiful work, formed from the amassment of records that once sought to explain. Ben Gooding, Artist www.bengooding.co.uk 4

Biography Jeannie Driver graduated from Portsmouth University with MA distinction in 2000 and with a 1st Class BA in 1996. She exhibited at galleries including: Cubitt, Apsex Gallery, Ether Gallery and Brighton Media Centre. Jeannie went on to develop her interest in notions of audience and relationships between artists, audience and artwork. For over 10 years she undertook relational works and public art projects gaining local and international attention. The Colour Happened on the Inside was featured on The Culture Show. Jeannie also collaborated with artist Mike Blackman on digital projects under the name of WHIM and was ‘highly commended’ by The National Campaign for Drawing for her curatorship and The City as a Canvas digital drawing and cycling project. Jeannie also collaborated with artists on public projects with SCAN. In 2007 Jeannie was invited by the Arts Council England to apply for a year’s funding to develop her SPIKE IT project. This included seven ‘spike it’ residencies in offices followed by a solo exhibition. Resulting installations, photographic prints and CCTV works have subsequently been exhibited in galleries across the South East. The project developed her interest in ‘paper’ and in 2009 Jeannie returned to producing installation and sculptural works made for exhibition in a gallery context. In 2012 Jeannie was commissioned by South Hill Park, under curator Dr Outi Remes, to produce new work for a major two-person exhibition titled Ubiquitous Materials. Later that year Jeannie was commissioned by OVADA to deliver the installation The Security Blanket of Beadle and Dom in Oxford Town Hall. Recent selection from open submissions includes two exhibitions at Arbeit gallery in 2012 and 2013 and the Void Open 2013 in Hoxton. Arbeit gallery subsequently offered Jeannie a solo exhibition, When Contents Become Form, 2013. Jeannie has a studio at Art Space Portsmouth, a registered charity, where she is currently Vice Chair. Within this role she has a particular interest in supporting residencies, recent graduates and emerging artists. 11

Six wall based works are constructed from part-shredded, part-remaining photographs are layered and represented on one plane, made from documentary photographs taken in galleries across regions and countries. “The shredding technique applied to the photographs adds three-dimensional texture to the work. The clean, minimalist cubic spaces become muddied and chaotic; the rational straight lines all screwed up and jagged… Witness to pondering in free space (Saatchi Gallery), is a circular photograph; resembling an iris; a god’s eye view of the world of the art gallery … as we gaze into the work it meets our eye, looking right back at us - a notion both compelling and appropriately completing another circular loop: you’re standing in an art gallery, looking at distorted images of people standing in art galleries.” David James, Art Critic

Acknowledgements Jeannie would like to thank the following people who have made this exhibition and catalogue possible: Arbeit Gallery, especially director and curator Nimrod Vardi, for his time, enthusiasm, courage and confidence. www.arbeit.org.uk Fred Neale for his relentless support, encouragement and technician skills. Ollie Neale, Zoe Kerswell, Jenny Woods, Henny Woods, Chris Williams for their nylon thread knotting. Artist Mike Blackman in helping build the wall. Sandy Danbury and Natalie Dowse for their invaluable help with the installation of White3. Sandy Danbury, George Best, Emma Boswell, Kat Nelhams Wright for their support and accommodation. Diana Driver for encouragement and financial support for framing. Art Space Portsmouth, for its subsidised studio and its members for their encouragement and peer critical discussion groups. www.artspace.co.uk The Catalogue: Artist, Natalie Dowse for design and production of this catalogue. www.nataliedowse.co.uk Artist, Ben Gooding artist for the accompanying essay. www.bengooding.co.uk Art critic, David James for inclusion of quotes in the catalogue from his review of the exhibition. www.londoncitynights.com/2013/09/when-contents-become-form-exhibition-by.html Photography: Sandy Danbury for images: page 2, 6, 7, 10 and 20 David James of London City Nights page 9